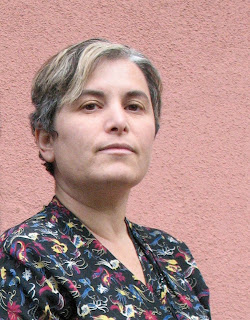 Kim Cooper is the creator of 1947project, the crime-a-day time travel blog that spawned Esotouric's popular crime bus tours, including Pasadena Confidential and the Real Black Dahlia. With husband Richard Schave, Kim curates the Salons of LAVA - The Los Angeles Visionaries Association. When the third generation Angeleno isn't combing old newspapers for forgotten scandals, she is a passionate advocate for historic preservation of signage, vernacular architecture and writer's homes. Kim was for many years the editrix of Scram, a journal of unpopular culture. Her books include Fall in Love For Life, Bubblegum Music is the Naked Truth, Lost in the Grooves and an oral history of the cult band Neutral Milk Hotel. The Kept Girl is her first novel.

Please welcome Kim to HBW and enter the raffle at the end of the post to win a copy of her novel. Visit Kim at The Kept Girl, or The Kept Girl's Facebook page and follow her blog tour here. Thank you for the opportunity to drop by the Hardboiled Wonderland on my February blog tour for The Kept Girl, a novel of 1929 starring the young Raymond Chandler, his devoted secretary and the real-life cop who is a likely model for Philip Marlowe.

Something I've learned while telling fragments of this story over many Esotouric true crime and Raymond Chandler-themed bus tours, then answering passengers' questions, is that my book has angles to it that will appeal to many types of readers.

Those with a yen for Los Angeles crime lore will be fascinated by the odd behavior of the Great Eleven cult and their deluded followers. Historically-minded folks will enjoy the portrayal of the jazz age downtown L.A. and its lowlife culture. Careful readers of Chandler's fiction will be most interested in the existence of Thomas James, and the suggestion that a real policeman might have inspired the character of Philip Marlowe. And those who come to the book already familiar with Chandler's famously devoted marriage to Pearl Eugenia "Cissy" Hurlburt Pascal Chandler will be surprised to find the couple at each others' throats for much of the book.

The decision to portray the Chandlers marriage as an unhappy one wasn't capricious. Although very little documentary material survives about their relationship—Chandler destroyed almost everything of Cissy's after her death—a recent archival discovery has cast a startling light on the abiding myth of this literary love affair.

A few years ago, my friend Loren Latker, proprietor of the Shamus Town website and the prime mover in the successful legal battle to move Cissy Chandler's forgotten cremains from a storage closet to the foot of her husband's grave, decided to devote a large chunk of time to perusing the Los Angeles County records for all people with last names starting with the letter "C" during the period of Chandler's working life. Loren didn't know what he might find, but he'd encountered enough foolish errors in the canonical biographical documents about the writer to think looking was worth the effort.

And sure enough, many hours into his research, he discovered official documents prepared in early 1930, around the time of the couple's sixth anniversary, spelling out the Chandlers' intention to legally separate.

Not long after this, Chandler would be fired from the Dabney Oil Syndicate and leave Los Angeles for a fresh start in the Pacific Northwest. It was the fragile Cissy's respiratory illness which drew him back to her side. They reconciled, and he would spend much of the next two decades nursing her through poor health. Her death would destroy him. The separation became their secret, in life and afterwards--until Loren found the evidence tucked away where it had been hiding in plain sight for decades.

When I turned to the subject of Chandler's home life in mid-1929 while plotting The Kept Girl, the 1930 separation documents loomed large in my mind. What had gone wrong in the marriage? At the time, Chandler was 41, Cissy almost 60.

It is widely assumed that Chandler was unaware of her true age at the time of their marriage. But six years in, with the biological changes that every woman faces if she lives long enough, it must have become harder for Cissy to maintain the illusion of youth. And Chandler, even if part of him didn't want to know her secret, would have to be stupid not to realize what was happening in his home.

I thought that he must have felt trapped, and longed for a way out. He was drinking and carousing with young women, endangering his career by missing work. The Chandlers separated in 1930, but Chandler's bad behavior continued. The depression hit and he was fired. He left town. But a sense of obligation to Cissy pulled him back. Chandler was an honorable man, and caring for needy women was in his DNA.

Then there's the matter of the Warren Lloyd family, who had introduced the couple, offering a $100 a month stipend to see him through the dark times--money that gave him the freedom to develop into a successful "Black Mask" writer of detective fiction. Was the stipend dependent on him looking after Cissy?

Ultimately, I think that Chandler made the best of the bed he'd made, and built up the myth of the great love affair, because to do anything else would be to admit his life had been wasted. Cissy needed him, and so he stayed. In time, the myth became real. He grew older, too. He flirted with his secretaries, but went home to Cissy. They loved each other.

But for a brief moment in time, their love was fractured and could easily have remained that way. It was in this very interesting time that I set my story, and revealed an aspect of Chandler's personal life that only now can be known, thanks for Loren Latker's patience and the good archival methods of the County of Los Angeles.

Some people might think the separation document casts a shadow over the whole of the Chandlers' marriage--but I think it's in the broken places that we are strongest, and that their love is all the more beautiful for how it was almost lost.


Enter raffle to win a copy of The Kept Girl

Posted by jedidiah ayres at 8:45 AM

What a fascinating couple. I am very interested in reading The Kept Girl now. Thank you for sharing their story.
karen94066 at aol.com