My Felonious Valentine: Kelby Losack on The Handmaiden 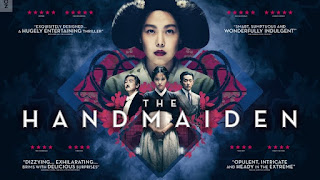 The ouroboros is an ancient symbol that depicts a serpent eating its own tail, forming a perfect circle. It is commonly interpreted as representing cyclical renewal—the infinite progression of life, death, and rebirth. The act of 69ing is when two partners perform oral sex on each other simultaneously, forming from a bird’s eye view a position resembling the number 69. In Park Chan-wook’s 2016 film The Handmaiden, the latter symbol is used to express the same sentiment as the ouroboros, except here, the snakes are human.

The film begins in Japanese-occupied Korea, circa 1930s. Several women  hold weeping infants under shelter of an awning while Japanese soldiers stomp through the rain-soaked streets. Our protagonist, Sook-hee (Kim Tae-ri), belongs to a sort of Dickensian family of orphaned thieves, the “Fagin” of which is a man we are only introduced to under the alias of Count Fujiwara (Ha Jung-woo). At the start of the film, an elaborate con to get over on an extremely wealthy family is already in development by the so-called Count and Sook-hee. Basically, the Count plans to seduce the Japanese heiress Lady Hideko (Kim Min-hee), while Sook-hee poses as the Lady’s handmaiden to encourage her to fall in love with the Count. After the Count and the Lady elope, they’ll commit the heiress to an asylum and Sook-hee and the Count will flee with the loot, or something like that. It’s a bit convoluted, but more on why that’s not important later. 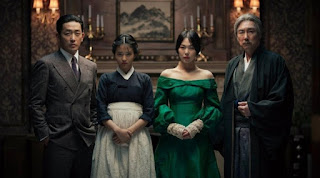 Something that is of very important note is the time in which The Handmaiden takes place. While most period pieces are aiming to provide historically accurate accounts of the past or simply revel in the aesthetic of a bygone era, The Handmaiden is using a specifically tense, confusing, and hostile time in history as the backdrop to a story full of tension, confusion, and hostility. The occupation of Japan over Korea is a metaphor for themes of conflict that the film is exploring: tradition vs modernity, oppressor vs oppressed, rich vs poor, sex-as-dominance vs sex-as-liberation. The motives of the initial con are immediately clear. Everything starts off as a relatable tale of class struggle, of reaching for a better hand than what the universe has dealt. In Sook-hee’s narration, she dreams of using her share of the fortune to sail far away from the “country yokels,” far from her life of poverty and pick-pocketing and the larger conflicts waging at home. And we’re rooting for her. But things get complicated upon arrival at the estate, which is owned by Lady Hideko’s Uncle Kouzuki (Cho Jin-woong),  a Korean man who—speaking of snakes—came in to possession of a gold mine by way of helping the Japanese invade his country.

The character of Uncle Kouzuki represents every oppressive force in the world at this time in the character’s lives: he’s rich as fuck, for one, and like most rich fucks achieved his wealth through dishonest means; he’s a traitor to his homeland who hordes a huge collection of Japanese books and requires Japanese be the language spoken on the grounds of his estate (even Sook-hee’s alias, Tamako, is changed to the Japanese translation of the name, Okju, immediately upon her arrival); and he’s a misogynistic old bastard who’s had his niece confined to the property since the age of five, using her to perform readings of rare books at his house-held auctions. 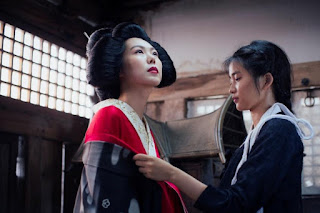 If none of this is sounding like the perfect choice for a Valentine’s Day feature, that’s the point. Up until Sook-hee’s introduction to Hideko, we’ve been fooled into thinking that this film is a quirky crime caper in which we are rooting hard for the thieves to make off with the loot, middle fingers aimed at the socially detached upper class. But then, through Sook-hee’s behavior and narration, we become privy to her sexuality, and her immediate attraction to the seemingly naïve heiress she is supposed to be ripping off. What unfolds for the remainder of the film’s first act—before it gets infinitely more twisty—is the blossoming of a secret romance between the two women.

Under the pretense of being a handmaiden, Sook-hee sleeps in what is essentially a closet right across from her Lady’s chambers (a pretty on-the-nose but clever metaphor). She wakes one night to Hideko’s screaming and calms her from the panic of seeing the ghost of her dead aunt, who had hanged herself from the cherry blossom tree in the courtyard. She spends the night in Hideko’s room, and it seems highly likely that her attraction to the heiress might be mutual. Cue the sexual tension that permeates the film for a montage of sequences—particularly a scene involving a bath in which Sook-hee uses a thimble on her thumb to dull a sharp, bothersome tooth of Hideko’s—and which culminates in the two having sex after innocent Hideko confesses she has no idea what men want, and is nervous about her impending plan to elope with the Count, who has been staying at the estate under the ruse that he is giving Hideko painting lessons. And if that proposal seems to be accepted out of nowhere, it’s because we’ve been fooled again. This is a Park Chan-wook film, after all, and the path from caper to romance is paved with revenge.

Part Two is where shit gets dark, but this wouldn’t be a true love story without it. After the newly wed Count and Countess Hideko cash out the inheritance and have Sook-hee committed to an asylum in Hideko’s place, the narration and perspective shifts to that of Hideko’s, and we flashback to a childhood full of physical and psychological abuse at the hands of her uncle, whose books, it turns out, are pornographic depictions of S&M acts that Hideko has been forced to read at her uncle’s auctions since the death of her aunt, whose sanity had dwindled after years under Kouzuki’s oppression. In these early childhood scenes, we see the seeds of rage being planted in young Hideko (portrayed briefly but brilliantly by Jo Eun-hyung), as she begins smacking the shit out of her nanny and all the handmaidens to make others feel as crazy as she does. All of a sudden, this is a princess-locked-in-a-tower story, and Uncle Kouzuki is the gross, evil dragon keeping her hostage. So when the flashbacks catch up to the Count’s ruse that the film kicked off with—this time from the perspective of Hideko’s involvement in the impending double-cross against Sook-hee—the motives are impossible to not sympathize with. Hideko wants to be free of her uncle, just as Sook-hee wishes to be free of her impoverished life of pick-pocketing and raising abandoned infants to sell to Japan (apparently that was a lucrative little hustle back then). The flashbacks continue leading all the way up to the double-cross, showing us a different vantage point of the relationship that blossoms between Hideko and Sook-hee, in which both women bare their whole truths to each other and together, devise another plot—this time for revenge, and for love. 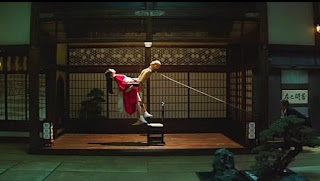 With its twists and its explorations of taboo sex (I don’t think occupied Korea was exactly at the height of gay pride), The Handmaiden sort of serves as a companion piece to Chan-wook’s other masterpiece, Oldboy (there’s a double feature date night idea). Every character wants something they can’t have, and all signs point in the direction of tragedy, but the final twist The Handmaiden has to offer is that there might actually be hope amidst all the chaos. This is a love story, after all. 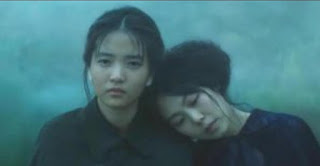 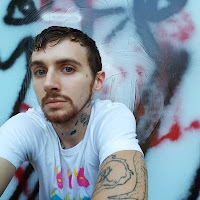 Kelby Losack is the author of Heathenish and The Way We Came In, both from Broken River Books. He lives with his wife in Gulf Coast Texas, where he builds custom cabinets and hangs out with rappers. Follow him on Twitter @HeathenishKid

Posted by jedidiah ayres at 7:11 AM