Razorback on the Run 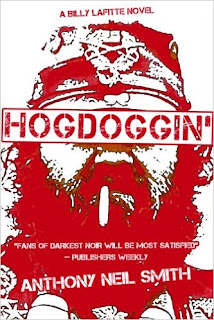 Hogdoggin’ - the sport - is a vicious, bloody spectacle in which a wild boar is set upon and ripped apart by a company of ferocious dogs.

Hogdoggin’ - the book - is a vicious, bloody spectacle in which an outlaw, ex-policeman is set upon and torn into by a multitude of ferocious enemies.

In last year’s Yellow Medicine, after getting shitcanned from the force and divorced by his wife when he and his partner murdered a suspect in Mississippi during the wild west aftermath of Katrina, Billy Lafitte was pissing away his second chance as a deputy in Yellow Medicine County in the plains of Minnesota. His grift included regulating the local meth market and exchanging leniency on petty busts for sexual favors from young women when he ran afoul of some small time terrorists using the meth trade to fund their operation and the Homeland Security agent who is on their trail and believes Lafitte is a part of their operation. The collision of Lafitte, Agent Rome and the terrorists left a trail of bodies – several scumbags and all the innocents - and the climax of Yellow Medicine found Lafitte weighing his options, seriously considering suicide or going underground and running from the legacy of his misdeeds. It was a stunning end to a gripping book featuring the most compelling anti-hero in crime fiction since The Shield’s Vic Mackey.

Hogdoggin’ picks up about a year later and finds Lafitte serving as sergeant at arms to Steel God, the seemingly indestructible and charismatic leader of a biker cult currently roaming South Dakota. He’s pumped up on an anabolic steroid regimen that Steel God demands, cracking heads, digging shallow graves and finding it unsettling to be the least lawless among his companions, but he’s under the radar. Waaay under the radar.

Turns out Steel God is dying of cancer, but damned if he’d going to lay down for anyone. He’s going to lead the gang until somebody challenges and kills him for the privilege. He’d like that to be Billy.

The last thing Lafitte wants is any kind of spotlight. He’s still not sure he wants to live, let alone lead, especially when there are other mutinous elements within the gang waiting for their chance to kill the leader – whoever that may be – and ascend.

About this time, Lafitte receives a message. Franklin Rome, the demonically driven federal agent, still convinced he had the right man when his superiors let Lafitte go, is biding his time within his disciplinary post to New Orleans, secretly conducting a search for Lafitte and manipulating Billy’s unstable ex-wife to believe that Billy is coming after her. It’s an attempt to lure Lafitte out of hiding so transparent yet effective enough that within a day Billy is on the road solo, riding a turquoise hog toward hell on one front and away from its snapping jaws behind him.

On the way, he encounters local police, vigilantes, bounty-hunters and federal agents, none of whom can dissuade him from his purpose and all of whom will collect their literal pound of flesh.

Like Vic Mackey, Lafitte’s motivations shift quickly and sometimes imperceptibly between simple greed, love for his estranged family and dedication to an image of himself that he wants, more than anyone else, to believe in, but what trumps at every turn is survival. You just can’t stop Billy Lafitte’s instinct for self preservation. He is ashamed of himself and frightened by the depths he has sunk to, but can’t seem to climb out of the damned pit he’s dug, and opts for digging deeper, clinging to the shaky logic that he’s bound to pop out the other side soon.

After the comically twisted Psychosomatic and the love song for hair metal – The Drummer - Anthony Neil Smith has created a saga that both plays for real stakes and for keeps, without sacrificing an ounce of the smart assed and twisted sense of humor that has grown a cult around his writing and vision for noir/transgressive fiction. 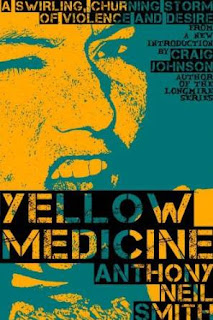 Like YM, Hogdoggin’s climax leaves space for you to draw your own conclusions. Will there ever be another Lafitte novel? There’s compelling reasons to hope for either answer, but one of the strengths of the Lafitte series thus far is the unwillingness of the author to repeat the experience of the previous book. Hogdoggin’ is NOT Yellow Medicine II, it’s a stand out standalone tragedy of a bad man becoming worse and hoping for better. The road to hell may be paved with good intentions but the road home is paved with blood.

Monday is Hogdoggin' Monday - the day to make your purchase a statement.
Posted by jedidiah ayres at 12:47 PM

Well, gee, Jed. Thanks for ruining the ending of YELLOW MEDICINE for everyone. There go all those sales...

Kidding. Thx for the love. I tried my best, and coming from you, the kind words mean a ton.

I'm looking forward to Hogdoggin’ and have to say this is the most excitement I've seen for a novel in some time.

Congrats on makeing it to the end of the rally Neil and publication day being so near can't suck either.

Well I've a reader's copy and I bought the original at the reading. This book is Neil's break-through-all-the-bullshit-of -summer-reading book. Put this up against Patterson or Koontz and watch them all burn and bleed. Trust me, you buy it. Start on the first page, it'll be hard to put down. Neil you are the man!!