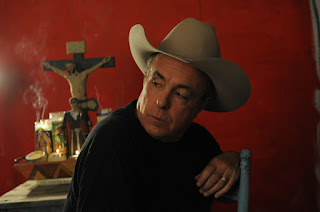 Earlier in the year I read Rogue Males, a collection of conversations with crime writers by Craig McDonald. It included an interview with Tom Russell, a musician I was unfamiliar with. Craig described his aesthetic as “noir set to music” and his decision to feature this conversation in a collection with the likes of Ellroy, Woodrell, Sallis and Bruen made me take notice.

I’ve tried hard to stay away from the dangerous and endless rabbit trail that the topic of music can be, on a blog, but I’d like to spend a little time discussing its place in narrative culture. Though, (or perhaps precisely because), we are removed further every generation from the days of oral tradition as the primary means of history and popular fiction, the power of a well constructed ballad remains a force like no other. It has that duel mojo of tale and hum-ability working for it making it distinct from the emotional abstractions of popular music and creating myth and demigod out of the characters therein.

Who doesn’t know who Bad Bad Leroy Brown was or where Joe was going with that gun in his hand, or what happened when Billy Joe and Bobbie Sue decided to cut loose? (They took the money and ran). For that matter, who doesn’t know why the narrator of Folsom Prison Blues killed a man in Reno? These examples are broad and popular enough that perhaps the stories hardly register anymore with those of us who’ve heard them enough, but that’s part of what I’m getting at – we know those stories. They’ve become part of our collective unconscious, both informing our understanding of the world and reflecting humanity back at us.

As this blog is dedicated to the darker side of film, literature and culture, the songs I’ll focus on will keep to that track, but while the darkness binds them, I’m interested in expanding the conversation beyond simply “murder ballads”. 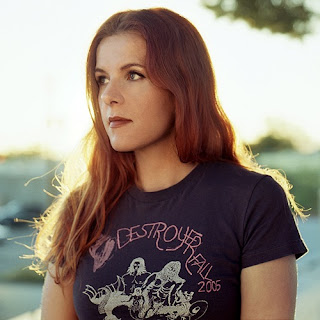 That said, the first I’d like to talk about is one of the finest modern examples of the traditional murder ballad – Make Your Bed – by Neko Case.

Neko Case has made a career out of injecting country and folk musics with the kind of atmospherics and general spookiness that make me happy. Many acts attempt and fail at similar moodiness with heavy handedness and broad stroke lyricism,but Ms. Case says it plain and pretty at the same time. The EP Canadian Amp features traditionals and covers and exactly one, (or maybe two), original tunes - Make Your Bed - told from the pov of a woman ambushing her man's lover at their rendezvous spot. The backbone of the song is a spare banjo and the vocals are harmony thick while the lyrics are nastily precise, sung with enough remove and resolve as to be a forgone conclusion taking her revenge nearly out of the "crime of passion" arena.

This one keeps me up nights. Keeps me on the straight and narrow. Keeps me buying Neko Case albums too. She has many tunes about killings, ghosts and dark lullabies of nearly all other ilk too. Music that I don't flinch when applying the term Americana to.

Here, for your reading pleasure are the lyrics.

Holy crap.
Posted by jedidiah ayres at 4:21 AM

Neko Case is fantastic. Great music all around. I'm a big Tom Russell fan, too.

Have you ever heard Eddie Noack's take on the Leon Payne tune 'Psycho'? The way he delivers it is stunning. Almost as if Thompson's The Killer Inside Me had been a song.

And if you are unfamiliar, check out some Johnny Dowd and Scott H. Biram. Can't go wrong.

As you know, I'm quite the Neko Case fan too. ('If I knew what was coming, I woulda set out running' indeed.)

I keep meaning to check out Tom Russell, but I'm told that his live shows are much better than the albums.

I clicked over to her website and found her music and lyrics intriguing.