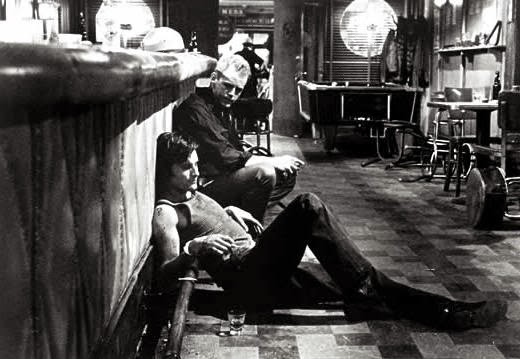 Guest contributor, the multi-talented Craig McDonald, continues the conversation of Narrative Music today at HBW. I'm running out of ways to say it... Him good.

Add to the roster Bruce Springsteen’s Highway Patrolman, a cut from the Flannery O’Connor-inspired 1982 release, Nebraska . Of course, Springsteen has long peppered his albums with crime-inflected ballads (a few years back, an actual anthology of crime stories centered on his Born To Run-era song, Meeting Across the River, was published).

But for me, Springsteen’s most evocative exploration of crime is Highway Patrolman.

Their tale eclipses the other noir-tinged songs on the very dark Nebraska album — lingering more powerfully in the mind than the title track, or Johnny 99 and State Trooper.

Joe and Franky are brothers who come of age in the early- to-mid 1960s in some farming community, perhaps situated in northern Michigan (the geographical clues dropped in the lyrics, appropriately, are confusing…give no concrete sense of place other than proximity to the U.S. ’ northern-most border).

Franky ends up in the Army: whether he enlisted or was conscripted is unclear. Joe, the levelheaded, steady brother, gets “a farm deferment,” heir-apparent to the family business.

But a failing crop market forces Joe to a course-correction in order to support his wife, Maria. He takes a post in the highway patrol, rising to the rank of sergeant.

When Franky comes back stateside in ’68, Joe’s official duties find him doing what he’s done all his life — trying to corral his brother who “ain’t no good”…to make him “walk that line.” But youthful, boys-will-be-boys escapades escalate with age and post “in-country” ennui.

Franky more frequently needs a protective brother operating under color of authority to haul his ass out of increasingly bloody bouts of bad behavior.

A man who “turns his back on his family,” he “ain’t no friend of mine,” Joe says, a repeated refrain.

We see it all in novelistic detail: lives lived in a dead-end town…nights lost in road houses, “takin’ turns dancin’ with Maria” while a sticks band’s cover of “Night of the Johnstown Flood” plays on.

Things blow to pieces one night in a barroom brawl that leaves a kid “bleedin’ hard from his head.” The beaten-on boy’s best girl fingers Franky as the perp and the call goes out over the radio.

Joe chases his brother down dark, back roads to the Canadian border. There, Joe breaks off the pursuit…sits in his cruiser and watches his brother’s “taillights disappear” across that line.

Highway Patrolman is a spare, evocative song that finds its most effective rendition in the crude recording its songwriter originally intended to serve as a demo.

In 1991, the song was actually adapted by Sean Penn for a little-seen film called The Indian Runner.

I didn’t know the flick’s pedigree the first time I stumbled across it on some late-night channel-surfing binge. But the epiphany came strongly and quickly: the song’s DNA and sad story of family allegiances run that deep.

Craig McDonald is the author of HEAD GAMES and TOROS & TORSOS. His third novel, PRINT THE LEGEND, is coming from Minotaur Books in February 2010
Posted by jedidiah ayres at 12:15 PM

The Indian Runner happens to be one of my favorite films too. NOBODY uses David Morse better than Sean Penn, (in this one and The Crossing Guard) and Viggo Mortensen, as usual, owns the screen. Oh yeah, Bruce Springsteen's not bad either.

Hadn't heard that song before so I had a listen...doesn't surprise me at all it caught your attention. soulful and elegiac

Loved the Indian Runner.(the Crossing Guard was a pretty fair piece of celluloid as well.)
And for my money, Nebraska was Springsteen's best album. Great piece, Craig.

Nebraska is far and away Springsteen's finest hour as a songwriter, and 'Highway Patrolman' is an excellent example of a narrative song.

I somehow missed out and/or overlooked The Indian Runner for years, didn't know about it being based on the Bruce tune, and ended up seeing it to catch the Harry Crews appearance. Moved right o to my list of favorites.

Indian Runner, classic, I happen to own it. Love most of what Sean Penn has directed, and Springsteen's Nebraska, damn good. And Craig, great slice of writing, thanks.

What a great piece. I love the whole Nebraska album. I'd never even heard of The Indian Runner before reading this, though. I'll have to track down a copy.

A whole slew of favorites here. FOUR CORNERS OF THE NIGHT. Sheer brilliance. THE INDIAN RUNNER and THE CROSSING GUARD, who knew. Loved both. And Nebraska was definitely the best Springsteen effort ever. The rawness disappeared after that.

Thanks so much, folks. And I agree entirely NEBRASKA is Springsteen's finest moment as a songwriter. There was an honesty and rawness there in his delivery, too, that has slipped away as that kind of faux-Okie accent started coming over him in the early nineties.

I'm awful when it comes to minding the lyrics of a song. But this makes me want to track down "Highway Patrolman" and hear how it's delivered. ... Great idea for a blog series, Jed, and great post, Craig.