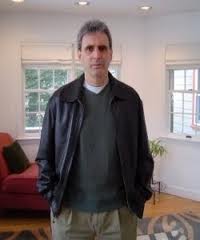 Dave Zeltserman writes about psychotic criminal personalities with no perceivable affectation, not a hint of added spice or gimmicky grooviness, precious little by way of witty banter and somewhere about zilch to do with the romance of crime. What he brings to his characters is a gut-level authenticity that in turn informs and anchors the stories to an emotional honesty no matter where they go.

And oh where they go.

He writes in long passages. Where most would cut, he lingers, not letting the reader look away from the scene, not letting an ounce of the weight of it evaporate unsavored. But that’s not to say they’re not enjoyable.

Dave answered some questions I had after reading Pariah, the second book in his thematically linked ‘man out of prison trilogy’ (bookended by Small Crimes and Killer). It’s his send up of Boston’s Winter Hill Gang’s legacy and the media clusterfuck that occurred a few years back when some of the main players were given celebrity treatment and book deals upon exiting prison. Each were given the opportunity to paint themselves the way they’d like to be seen and judging from Dave’s novel, I’d say it got to him.

I had no idea Pariah was going to be based on Whitey Bulger. I assume Kyle Nevin is based on Kevin Weeks and John “Red” Shea. Is that right?

I'd say that it was more inspired by Bulger, Weeks and (Stephen) Flemmi. Shea was a small-timer with an inflated sense of himself, although he did inspire one scene in Pariah.

Are there more books you think you’ll be inspired to write by the Winter Hill Gang?

I'm thinking about bringing Kyle and Red Mahoney back, setting the story in 1990, and having something loosely inspired by the Gardner Museum heist. I have this plotted out in my head, but whether I do this depends on some other things happening.

What was your knowledge of Southie’s criminal underclass growing up in Boston?

Like a lot of people in Boston I was fascinated by all of this and read everything in the papers and listened to everything that came on the radio about it. It really is an amazing story at so many different levels. Here you have as brothers Boston's top mobster and the state senate president, with each of them helping each other--Whitey leaning on other state pols to keep brother Billy in power, and Billy squashing state police investigations into Whitey.

Your books are not the first bits of popular fiction to be inspired by Bulger and Co. Were you influenced by any others?

To be honest, no. Although the fact that New York publishers gave book deals to Boston mobsters like Kevin Weeks and 'Red' Shea helped piss me off enough to write Pariah. That and Little Brown giving a 600K book deal to a Harvard student, the one who ended up plagiarizing other chicklit books, only because she was an attractive package. A lot of rage at NY publishing went into writing Pariah.

Have you received feedback, positive or negative, from neighborhood associates of those you’ve fictionalized?

I found one Southie blog site who blasted me, but they did so admitting they didn't read the book. They didn't like the fact that some guy from the 'burbs wrote about Southie.

Is there factual inspiration for the other books in the trilogy?

Killer was inspired very loosely on Boston hitman John Martorano, or really more the idea that some could kill over 20 people and still strike a deal where they give up a crime boss and get 12 years.

Small Crimes was very loosely inspired by a couple of true crime stories, but no one involved has any national notoriety.

At what point did the idea of a thematic trilogy occur to you? Did it slowly evolve or spring forth full formed?

This was completely an accident. My noir hero from Pariah, Kyle Nevin, is the polar opposite of my luckless Small Crimes protagonist, Joe Denton. While Joe is someone who wants to go through life without causing any more damage and at some level is seeking redemption, Kyle is just this destructive force of nature without a redemptive bone in his body. So when I was writing Pariah I thought it would be interesting to have it start the same as Small Crimes; with my noir hero just being released from prison, and then seeing the path he takes. So then when Serpent's Tail decided they wanted Pariah, I threw out the idea of making this a trilogy by writing a third novel inspired very loosely by the idea of a hitman like John Martorano being able to strike a deal so he can walk after serving a relatively short prison term. My only reason for throwing this out was so I could sell two books instead one. And so Killer and the 'man out of prison' trilogy were born.

My sympathies lie entirely with victims of crimes and their families. I have no sympathy for the criminals, whether they rat or keep quiet.

Do you believe in a reformed criminal on the level of your characters?

Well, Kyle certainly has no chance of ever being reformed. Not if you put a shotgun to his head. Killer is partly about whether someone who commits the horrific crimes of my protagonist, Leonard March, can be reformed, especially with all the anger towards him and all the people still suffering because of him.

Pariah deals a fair amount with the celebrity status of criminals and works the repulsion/fascination angle pretty hard, and while your contempt for the actions and lifestyle of Kyle pervade in the book’s tone, there’s obviously a deep underlying fascination present with the workings of a psychotic mind and personality. How do you differentiate between fascination and worship?

Well, I wrote Pariah to be read at two levels--at one level a crime novel, another level a satirical look at publishing and the celebrity nature in the US--how we can take a vicious thug like Kyle and turn him into a celebrity for the almighty dollar. While I wrote Kyle to be as vicious and despicable thug as possible, I also tried to write him honestly as a human being and not a cartoon character. He has his own
justifications for the things he does. So in that way I could leave it to the reader to find him repugnant if they choose to.

Are you a full time writer at this point?

Sort of. Not in the sense that I'm making enough money to do this, but I'm trying. I have to qualify my answer. I spent over 20 years working as a software engineer, and I made some money with one of the startups I worked for. When I quit in 2007 to try this full time I had enough money where I didn't need to make that much writing to make this work. Then we had the stock market crash, so my situation changed. Now I need one of several things to happen for me to keep doing this; a bunch of things that are close but haven't happened yet. For a lot of authors, you can make it if you get enough foreign deals and enough film options. I've got one film option so far and I'm starting to get a good amount of foreign deals, and if this keeps up I'll be able to keep doing this, or if one of the other things I'm hoping for, otherwise I'll be back to developing software.

Can you give me any specifics on film options? How do they make you feel?

My upcoming book, Outsourced, has been optioned to Constantin Film and Impact Pictures, the guys who make the Resident Evil movies. So far the script's been written and it's now out with actors and director and they seem serious about doing this. I've learned a lot in the process, and at this point I'm hoping they start filming, because once the start filming that's when they buy the film rights from me and that's when I make some real money.

I think there's a good chance I'll get more books optioned and hopefully filmed. Caretaker of Lorne Field, which is out this August is getting a lot of film interest and right now is with about 25 studios. One of the producers involved in Outsourced is trying to put together a film deal for an unpublished book of mine--think Sin City with Vampires. And I think it's only a matter of time before something happens with Pariah and Killer.

About how I feel about it--the book is mine, the movie is theirs. The whole point with the film is to make money so I can keep writing.

Tell me about the decision to publish 21 Tales electronically.

All my books are being published only in print, and I figured I should get a little exposure in the ebook space, especially with Joe Konrath making it sound so easy. So I put together this collection of short stories but I also arranged for New Pulp Press to publish a trade paperback version.

So how’s it been so far?

It's not as easy as Joe Konrath makes it sound. I think there was a small window where authors could make a little money self-publishing ebooks, and Joe himself has had some play by acting as the savior for the self-published and the slayer of the big publisher, but now that you have half a million books on the Kindle store, that window is closed. A few self-published ebooks will come out of nowhere and do well, but those will be few and far between as most books will be lost in that sea of self-published ebooks. For most authors print books remain your best chance of making it. When you have a book print, you'll get trade reviews, newspaper reviews, sell foreign rights, film rights and most importantly, have dedicated booksellers handselling it. Most ebooks are just going to get lost in the maze.

Do you feel part of a community of writers? If so, who would you consider to be your peers?

My personality is more of a software engineer and I'm not really a writerly type, I'm more someone who sits alone and writes what's in my head. So I'm more of just an average boring guy who likes to watch football, baseball and drink beer. Up until now I've been avoiding writing conventions like Bouchercon and associations like MWA. The writer friends I have tend to be more solid down-to-earth types without raging egos; people like Paul Tremblay, Roger Smith, Vicki Hendricks, Charlie Stella and Ed Gorman. As far as my peers, I don't know, but I think very highly of the writers I just mentioned.

Tell me about your study of martial arts.

I've been studying Kung Fu and Tai Chi for a while, and a few years ago earned by black belt in Southern Hung Gar Tiger-Crane style, although we also learn a lot of other styles. It's all good stuff, helps keep me in shape and keep the fighting scenes in my books more realistic. The only reason I mentioned it on my bio is since I'm mostly a boring guy I had precious little else of interest to mention.

(More on Dave, Pariah and The Winter Hill Gang at Ransom Notes)
Posted by jedidiah ayres at 10:01 PM

Dave's one of the best. Terrific interview.

Everybody saw THIS right? http://latimesblogs.latimes.com/lanow/2011/06/whitey-bulger-arrest-santa-monica.html