I Started a Jook 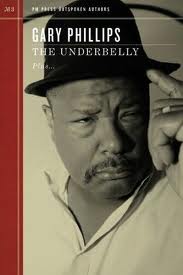 First off, Keith Rawson gets my vote for hardest working man in crimebusiness. Forget, or try to, the sheer volume of short stories he's producing these days, I'm talking about the publisher/critic/journalist aspects of K-RAWS. For instance, the ever excellent reboot of Crimefactory just published issue four featuring HBW favs like Allan Guthrie, Scott Wolven and Kieran Shea plus fiction by Brian Murphy, Michael Gonzales and Graham Powell and features from fellow editor/publishers Cameron Ashley and Liam Jose, more from Chris La Tray, Andrew Prentice, Andrew Nette, Audrey Homan and the usual feature from The Nerd of Noir. And for exhibit number two, I'll direct you to the latest in his video interview series with Gary Phillips, editor of the new Orange County Noir and author of this summer's The Underbelly, which looks great. Phillips also had his classic The Jook updated and republished by Switchblade recently and they're looking like the future to me. Some really handsome PBOs of solid caliber, (check out Pike by Benjamin Whitmer - another heads up from Keith - if you wanna see for yourself).

Over at Ransom Notes I'm all about Edward Bunker one of America's greatest convict authors. I got to Bunker thinking about Jacques Audiard's relentlessly compelling A Prophet out on DVD next week. The film to beat this year, (though The Secret in Their Eyes already did for the best foreign language Academy Award).

And finally, need I remind yous about N@B Wednesday, August 4, 8pm at the Delmar Lounge? We'll be featuring graphic novelists Matt Kindt, Tim Lane and Scott Phillips - (Gary's twin brother). Tim's short film The Passenger will be shown - you don't wanna miss that. I'm talking to you, Ron Earl. Take that vacation early.
Posted by jedidiah ayres at 7:19 AM

You complete me......
Thanks for the compliments, Jed.

Such as it is - Top Shelf. Colorful and appropriate gloom. Names mentioned, memories evoked,aftershock, after-shake, after too much tequila...damn ramble through the ramble on - a devotion to writing and neighborhood real...Streets and hollow-point slugs...Even hardly a nod to characters wearing a badge (I am solomente admirer of criminals and their stories - I also enoy illegal buds and powders...Hell, even elixirs and a chapter or two of Celine').

So I salute you for doing all of the things I can't - one being to make myself presentable and get something like this (your blog and the cool photo-shoots).