No Matter How I Struggle & Strive 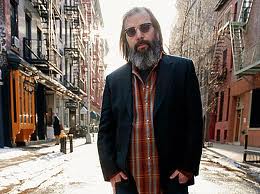 Junkies and country music. Steve Earle knows of what he speaks and damn can he speak. I'll Never Get Out of This World Alive reads awful strong. I had a great time listening to him speak Monday on his books and music as well as the occasional acting gig and speaking other people's words, though, as he said, he's had a good go of it, having them written for him by the likes of David Simon (The Wire, Treme) and Tim Blake Nelson (the uneven, but pretty entertaining Leaves of Grass). If you get the chance, take it. Standing in line to meet the dude, I hear the guy ahead of me confirm a rumor about a bar in town that's awarding free beers to anybody who bought Steve's book and once I've digested the blessed info, I do an incredibly nerdy thing and ask him if he's on the radio talky-box 'cause his voice is damned familiar. Yup, Tim Rakel who hosts the badass Mystery Train show on the beyond badass KDHX community radio station in St. Louis, (and I'm told you can stream it online for those of you living in the future) was standing just ahead of me and we share a couple awkward moments of 'heh, yeah... on the radio... yup... that's cool... uh-huh... neat.' Eventually a semi-intelligent exchange takes place regarding musicians writing books (we've both read Nick Cave's And the Ass Saw the Angel) and I'd just finished Nathan Larson's The Dewey Decimal System which I'm blathering excitedly about over at Ransom Notes. Good stuff from the former Shudder to Think rocker and current film scorer, (Ima haveta watch Dirty Pretty Things again soon and focus on the music), but yeah, if you like Philip K. Dick, Jonathan Lethem, Duane Swierczynski and Victor Gischler, I'll thinka yull like TDDS.

Tonight!!! Join me, Scott Phillips and Tim Lane at Subterranean Books for another round of multi-media entertainments revolving around The Myth of Jackie at 7pm and if you haven't picked up Tim's book Abandoned Cars yet, yur dead to me.

And just added to the June 11 N@B event already featuring Aaron Michael Morales and Frank Bill, the cantankerous and bombastic John Hornor Jacobs in support of his debut novel Southern Gods due later this summer. As we're holding a Saturday event this time we will not be at The Delmar Lounge for the first time since N@B's inception, so stay tuned for a venue announcement and possibly another kick ass participant.
Posted by jedidiah ayres at 8:57 AM

Wish I could be there, Jed.

Can you folks start holding these events a little closer to Maine?

Ah, damn it! What I wouldn't give to be there to watch Jacobs drunkenly debase himself.

That's one hell of a line up, Jed, have a blast