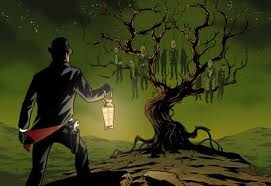 Was great to see everybody who came out to the Donald Ray Pollock event at Subterranean Books last week. I got to introduce him and decided to mostly read directly from Kyle Minor’s review of The Devil All the Time which was a good decision. Afterward, grabbed a drink with Rod, Judy and Matthew McBride and that was a good decision too.
You know what else would be a good decision? Doing what I tell you to, that’s what. How many times have I told you to pick up and read The Sixth Gun by Cullen Bunn and Brian Hurtt now? Mmmm, five or six anyway. Welllll, Imadoitagin. Pick it up. Read it before you watch it on SyFy. Over the weekend came the announcement  outta ComiCon that the cable network will be adapting the comic book for television. Am I excited? Hell yeah, I’m excited – that’s a great series and SyFy’s history boasts y’know Battlestar Galactica and… Well, Battlestar Galactica was a good fuckin show. Before the weekend’s announcement I was trying to drum up some adaptation fervor for Brian Hurtt’s latest book Cowboys, a Vertigo Crime one-off , written by Gary Phillips (who’s also got another comic book just out – Angeltown) over at Ransom Notes. I petitioned the likes of Martin Scorsese, Brian De Palma, Spike Lee and Antoine Fuqua, but I haven’t heard back from any of them yet.
I did hear back from one film maker though; Thomas Kaufman who stopped by the HBW with a guest post about writing violence a couple weeks back – a few of you read and appreciated that one. Just dropped a line to lemme know that he’s got a companion piece up at The Prime Time Crime Review. 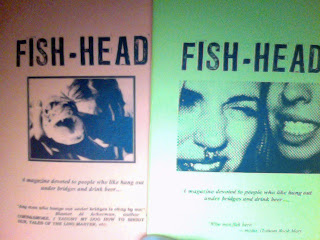 Tomorrow night I’ll be at Square Books in Oxford, MS for the Megan Abbott - Scott Phillips event for The End of Everything and The Adjustment. Never been to Ol’ Miss, (though I used to live in Arkansas), and I’m looking forward to it. Speaking of Arkansas, I just read the first two issues of Fish-Head – a magazine devoted to people who like hang out under bridges and drink beer…- that I read about on Don Lee’s blog and enjoyed them immensely. They’re published outta Clarksville and speak of many places I know and knew in Fayetteville, Rogers and Eureka Springs, (hell, probably Erik Lundy did too, maybe even John Hornor Jacobs, Tom Franklin, Charles Portis, William Harrison or Daniel Woodrell – all spent their time in Arkansas). My favorite pieces included: How I Almost Wrote Porn for the Mob and Lived to Tell the Tale, Dept. of Strange Sexual Encounters: Case # 216B and Emmett Sudsbury’s Taxicab Confessions. Emmett? You’re ever up in St. Louis, let’s set up a reading.
Somebody else who’s worked as a cab driver that I’d like to rope into one of our events, other than Jack Clark (Nobody’s Angel), is St. Louis’s own Daniel Waugh who’s written at least a couple of books about St. Louis crime – Egan’s Rats and Gangs of St. Louis. Good anecdotal true crime that ought to enhance the St. Louis experience for anybody coming to town for Bouchercon in September.
When I get back from the Crooked Letter, Crooked Letter I’ll be focused on the next N@B event happening Saturday, August 6, 7pm at Meshuggah Café. Scott will be doing his first St. Louis event for The Adjustment, Jane Bradley will make you squirm reading from You Belivers, Jesus Angel Garcia will probably just collapse in exhaustion built up over the past weeks on the road, but hey I’m sure that’ll be entertaining too. David Cirillo will read from his story in Noir at the Bar THE BOOK! (which SHOULD be available for the first time that night!), so it oughtta be…emotional.
Posted by jedidiah ayres at 4:39 PM

Great time after the DRP reading. Your knowledge of fiction is befuddling to me. How can you know so much and constantly stay on the cutting edge of awesome? I am amazed by you, sir.

Your appetite for all thing noir is amazing. I can't keep up - my TBR pile - half od which is your fault- could be featured on Hoarders.