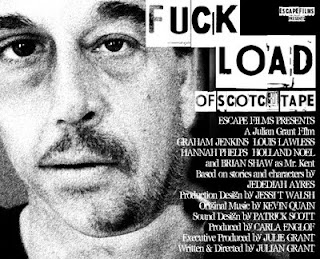 Check it out. Just look at that poster. Gives me chills, but maybe that's because I know the awfulness that awaits Benji Metcalf the hapless fucktard whose story A Fuckload of Scotch Tape is. I wrote that story trying, just trying to make someone who does something absolutely indefensible and unforgivable in the opening paragraph an object of pity. More than an object of pity. An identifiable and get-behindable protagonist who you want to see succeed... or at least escape unscathed. Did I succeed? I think so. Julian Grant thinks so. But I tell you what - reading a brief description of Benji's transgressions in a short story and watching them take place on screen are two far different experiences. When I read Julian's script, I thought, WTF? Did I write that? This is really awful territory to be hanging around in. Julian's film Fuckload of Scotch Tape is going to be an acid bath for your soul... with singing. Yeah, it's a musical. Yeah, I'm soooo good with that. In fact, thanks Julian for introducing me to the stylings of Kevin Quain and thanks Kevin for consenting to let Julian use your music to tell this pitch black (and hopefully funny) story. And hey, thanks, Graham Jenkins for donning such a terrible mustache (a plot point for my intersecting stories Fuckload and Mahogany & Monogamy). Vanity is not your name. Shooting starts this week! 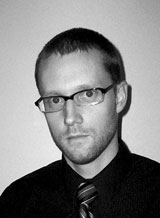 Meanwhile, had a great time in Carbondale Friday where I participated in SIUC's annual Lit-festival, The Devil's Kitchen. I was on a panel titled The Anthology Pathology with Pinckney Benedict, Laura Benedict and Josh Woods discussing the anthologies we'd edited. So believe that I pimped Noir at the Bar and D*CKED with a bawm-chicka-wow-wow soundtrack and everything. I'd never met Woods before, but was familiar with him through the Surreal South books that the Benedicts have put together every other year since '07, and I was eager to meet him. Do yourself a favor and turn to his entries early whenever you come across his work. I picked up a copy of the new anthology he edited - The Book of Villains - that's just out from Main Street Rag, while I was there and the first thing I'm doing is finishing the story he read part of at the event about the unsuccessful retirement of Blackbeard the pirate.

Took the Nerd of Noir's advice and watched Paul Andrew Williams's London to Brighton over the weekend. Brilliant film. Talk about grabbing at your tender bits from the opening shot... Fantastic performances from Lorraine Stanley as Kelly, a London prostitute who takes runaway Georgia Groome (in the third excellent portrayal of a teenager by a teenager I've seen lately - the others being Alex Shaffer in Thomas McCarthy's Win Win, and James Frecheville in David Michod's Animal Kingdom, hey writers, guess what? They're teenagers, not frustrated grad students). All we need to know about either character is observable literally on their face and in their actions. Also excellent in that cast is Johnny Harris as Kelly's pimp - sleazy goes without saying, but desperate and human to boot makes him all the more terrifying. The only odd note is Sam Spruell as the heavy hunting them down. He's effectively creepy, holding the screen like a DNA side project of Dylan Baker, Willem Dafoe and David Bowie, but the tone of his character I dunno, maybe belongs to a different movie, (like Brad Pitt in Inglourious Basterds). Still, with an 86 minute running time (and I do mean running) it's as stripped down and fight-ready as anything I've seen in a long time. Thanks, Nerd. Do yourself a favor and pay attention to the Nerd's crime flick double feature pieces in each issue of Crime Factory.

At Ransom Notes, I'm talking to John Rector about his latest, Already Gone and... damn. That's three kick ass books in under a year and a half from his Nebraska hidey hole. Guys like him make me feel pathetic. You know somebody else who's getting shit done these days? Nik Korpon. Less than a year since his first book Stay God was released, he's published two novellas, the excellent Old Ghosts last spring and the brand new By the Nails of the Warpriest now-ish... In Print! I'm happy for authors who are getting exposure and making some money with eBooks and I'm pleased as hell that people are reading them, but it's still pretty special to have an object to read. Check out David Cranmer's interview with Nik over at the Gutter Books site.
May get out to see Sean Durkin's Martha Marcy May Marlene this week (or perhaps Jeff Nichols' Take Shelter) and I'm feeling the need to re-watch Martin McDonagh's In Bruges. Otherwise, getting through Sons of Anarchy's third season which has a pretty laughable trip to Ireland - I just keep thinking of The Brady Bunch on vacation in Hawaii - but still just enough interest to keep going. Enjoyed Stephen King's cameo early in the season and WTF with all the Deadwood cast members? I mean, good for them, but it's a weird reunion, and not the one I'd really like to see them do, but I especially love anytime Robin Weigert is onscreen.
Posted by jedidiah ayres at 9:26 AM

LONDON TO BRIGHTON was a rare shot-to-the-gut Brit crime movie that stuck with me. I'm convinced that no actor does "cornered" like Johnny Harris. He's an absolute monster in THIS IS ENGLAND '86, and yet one of the nicest fellas around.

Man he was great in that one. This is England is one that's been on my list for a while... guess I'll have to grab at it

There's only one crime, I can't ever find myself having sympathy for the toward the perp. If it is anyhting other than "that crime", I'm in. It's killing me, not knowing what this guy did. Is the story avaiable to read anywhere? LtoB sounds like my kind of flick. The NofN knows his shit, that's for sure!

That poster is just so fucking perfect. Stoked for you, roomie.