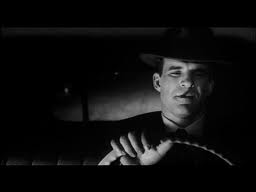 How weird is this? Benoit Lelievre asked me to contribute a piece to his blog Dead End Follies regarding the book that sparked my shit whatever that may've been. That was easy - White Jazz by James Ellroy were that fer me - only I was afeared that he'd be gettin a glut of like entries, so I used the opportunity to talk more about me than about the book. S'what I do. Taking the circuitous route to Jazz I digressed just a smidge on Carl Reiner's silly masterpiece (it just gets better every time I see it) Dead Men Don't Wear Plaid starring Steve Martin as hardboiled dick Rigby Reardon interacting in increasingly bizarre ways with clips from classic film noir clips. You can read my contribution to My Dark Pages today. Coincidentally, over at Ransom Notes I'm riffing on the Q.R. Markham plagiarism scandal and invoking the spirit of Reiner and Martin in the process. Sure, I've loved the movie for a long time, and if you happen to have a signed copy of one of my pseudononymously published novel from a decade back there may even be an inked invocation of Rigby Reardon, but I've never written about that film before and now, what do you know, twice in one day! Another coincidence - my Ransom Notes plagiarism piece had me linking to Jonathan Lethem's brilliant essay The Ecstasy of Influence at Harpers and I had no idea, he'd just released another collection of essays (that one being the titular selection no less), which I've simply got to get my hands on. Loved and was inexplicably moved by his first collection The Disappointment Artist.

Speaking of Lethem, two of his books made Thomas Mullen's My Five Favorite Hard-Boiled With a Twist Novels over at the Mulholland Books blog where this week Dennis Tafoya chatted up Cortright McMeel the author of Short and the publisher of Murdaland about his new gig as editor for Noir Nation the exciting new electronic multi-media international noir magazine. It's a good time to have an eReader. If I were inclined toward that kind of thing, I'd be reading All the Young Warriors by Anthony Neil Smith or Dead Money by Ray Banks or one of their other Blasted Heath compatriots right about now. Buuuut, I'm not, so I'm not. 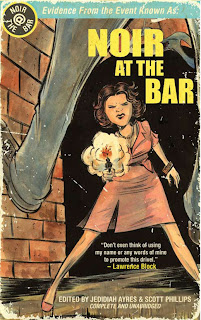 No, I'm still not an eReader. I like, I more than like, the physicality of books, which is why the Noir at the Bar anthology is only available in print. Those of you who've got one, I think you can testify that it's a helluva nice object and that it'd make a helluva good gift for somebody you know who likes our kind of thing. But don't take my word for it, check out what Elizabeth White had to say at her Musings of an All Purpose Monkey blog. Seems she's zeroed in on several of the original stories in the collection as favorites - Deviances by Frank Bill, Vampires Are Pussies by Chris La Tray and Outside Lou's by David Cirillo, (previously published work by Daniel O'Shea and Matthew McBride get nods too). Sound like a gift you'd like to give somebody? Where can you get a copy? Only at Subterranean Books.
Posted by jedidiah ayres at 1:07 PM

Thanks for stopping by today, Jed. Great contribution to MDP