Give Me More Melbournian Dipshits 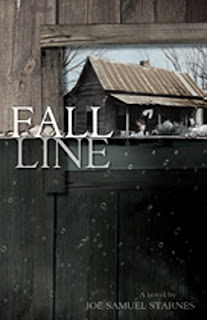 You have a good holiday last week? I spent mine in the land of Charles Portis, William Harrison, John Hornor Jacobs and Don Lee - and the personal punching bag of Steve Weddle - Arkansas. Does that do anything to your cockles? You likey the mythological American South? Can you just taste the eminent publication of William Gay's The Lost Country? Y'know what you might be looking for? Fall Line by Joe Samuel Starnes. I'm taking my time with it, 'cause it's not in a hurry, and I'm liking that juuuuuust fine. I'm sure I'll have more to say when I'm through, but yeah, I think I'm way safe recommending it to you. Especially now that it's gettin nippy out. I'm finding more time to read for some reason.
In Fayetteville I availed myself of the ridiculously awesome Dickson Street Bookstore as well as Nightbird Books (also on Dickson) and betwixt the two and a handful of good mails this week, I acquired titles by N@B authors - Sean Doolittle and Jane Bradley as well as Craig McDonald, Daniel Woodrell, Benjamin Percy, James Sallis, Bonnie Jo Campbell, Chris F. Holm, Josh Bazell, Cara Black, Martin Limon, Colin Cotterill and Andre Gelasimov. Also got me mitts on the Versus Anthology edited by Josh Woods and featuring N@B kids like Kyle Minor & the Benedicts P&L.
Over at Ransom Notes I got into Leonard Fritz's book In Nine Kinds of Pain, the latest from Jon Bassoff's New Pulp Press, and it's a wild one. Really some interesting choices coming out of NPP. Can't wait for Jake Hinkson's Hell on Church Street and Jonathan Woods' A Death in Mexico next year.
Ken Russell died... shit. Altered States, The Devils, multiple D.H. Lawrence adaptations... Never cared much for Tommy era Who, so didn't ever see it, but maybe I should now.
Cameron Ashley has a new piece up at Beat to a Pulp. He's quickly become one of my favorite short story writers. His contributions to the two volumes I edited this year certainly helped bring that about - One Fine Bird from Noir at the Bar is a sharply twisty tale of the Eggman who made his debut in the Plots With Guns story Blood & Bone in Bambooland, and Codename: Balladeer from D*CKED is just a painfully funny story of the weaponizing of bad music - something that really gets to the root of all fears musicians like myself harbor. And you know, his N@B appearance and delivery of Dog's Breakfast went just a little ways to helping establish my fandom. Cam's latest, Papercut Pete's Blood-Stained MacGuffin is another Melbournian-dipshits-fucking-around-out-of-their-depth tale set in the same universe as B&BnB, Bird and Breakfast... Come to think of it, these'd make for a nice collection.

Over at Spinetingler you can check out some poster art n shit from Julian Grant's Fuckload of Scotch Tape production. Three weeks left to shoot on that monster and Julian promises to be 'balls deep' in editing when I head to Chicago in January to hold him accountable. Looks boss so far. Eager to hear Kevin Quain put to Julian's images.
Posted by jedidiah ayres at 9:11 PM