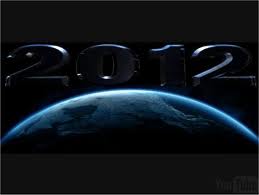 Hey lookit, kids: Crime Factory is back like they mean it. Tom Piccirilli, Johnny Shaw, Benjamin Whitmer, The Black Nerd, Ray Banks, Andrew Nette, Kenneth Loosli, Chris Benton, Paul D. Brazill, Chris Deal and dirty ol' N@B bastards like Daniel B. O'Shea, Matthew C. Funk and a previously unpublished interview with Scott Phillips. Plus Frank Wheeler Jr. gives the Noir at the Bar anthology an attentive read with detailed comments on contributions by Matthew McBride, Cameron Ashley, O'Shea, Dennis Tafoya, Kyle Minor, Pinckney Benedict, Sean Doolittle and in a first and most likely last, my own: Tenks, Franks. Wowzer. In case you can't follow the link on your CF download you can use THIS ONE to Subterranean Books - the ONLY PLACE IN THE WORLD to get a copy of the book.

Y'know who else reviews books? Donald Ray Pollock. Take a gander at his thoughts on The Outlaw Album by Daniel Woodrell and tell me that ain't sweet. Now compare thems to my comments today at Ransom Notes where I'm all about Stephen Blackmoore's debut City of the Lost and you'll see clearly how short the stick is Blackmoore drew in that little match-up. But, don't hold my inferiorities against Stevie's horror/crime zombie pulp-up, cause it's a lotta fun. 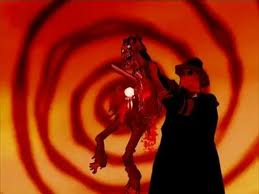 Speaking of all things zombie, Rob Zombie is in production (or maybe post by now) on his latest film The Lords of Salem which I'm assuming is inspired by his song of the same name or at least by the same muse. And shit, if the movie is as scary as the video, it's gonna kick ass. Great cast of course - Zombie regulars Sheri Moon and Sid Haig are joined by classic creepies Clint Howard, Lisa Marie, Udo Kier, Michael Berryman, Billy Drago and Dee Wallace. I'm also excited to see Maria Conchita Alonso in a prominent role (I wrote a song once called Maria Conchita Alonso - Yes I did - she'd caught my eye early on appearing in a bunch of my favorites from my time spent in the eighties - The Running Man, Extreme Prejudice, Colors, Fear City and that batshit Nic Cage flick Vampire's Kiss). Anyhow, the song's video runs on a parallel track to what I envision as a novel length adaptation of my story The Adversary from Surreal South '11 - not quite the same, but similar enough to make me wanna drop everything and write it. 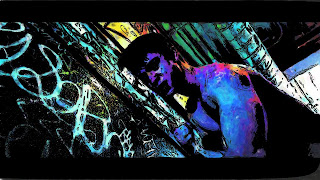 And while we're on movie stuffs and gnarly graphics go check out some of Julian Grant's tests for the visual style of Fuckload of Scotch Tape at the FLOST Facebook Page. He's even dabbling with publishing a promotional graphic novel which would look something about like this. 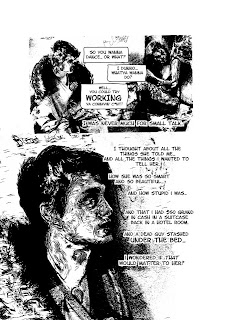 Swell. Can't wait to be able to announce where you can see this beast.

Finally, mark up your brand new calendars for Tuesday, February 28 'cause it's time for N@B. There, I said it. Lineup is still filling out, but we've got Caleb J. Ross and Gordon Highland locked in.
Posted by jedidiah ayres at 11:49 AM