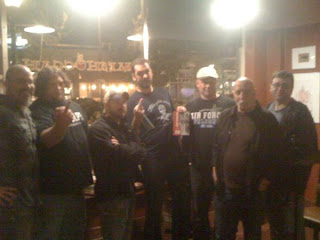 Holy crap. Man, you weren't there and that's what you've got to live with foreverafter. I don't envy you. But you know who was there? From left to right, fuckin' David James Keaton, Matthew McBride, Frank Bill, some guy standing on a box, Cortright McMeel, Les Edgerton and Erik Lundy. More previous N@B ne'er do wells like Sonia Coney, Jason Makansi, Rod Wiethop were there soaking up the heavy scents of testosterone and shame hanging in the air, but that's what the booze is for. 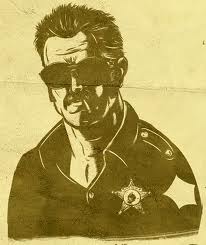 Incidentally, Les, aside from being a genuine badass, drink your milkshake writer and lucky bastard (you should meet his wife), is a hair stylist with an opinion. Here's one of many I picked up over the weekend: Mad Men is bullshit. Man was I bummed to hear that, 'cause I'd really been digging it for four seasons, but now that my eyes've been opened to the inaccuracies in the haircuts, dude, it's gonna be hard to tune back in. You heard right. Don't be coming up here with your fuckin' phony-ass haircuts tryin' to make me think it's the 1960's up in here. Bullshit. Some prissy-ass, vain, actorly bullshit. 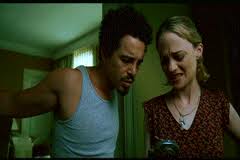 Les and his wonderful wife arrived in St. Louis last night followed a few hours later by Cort's Irish enthusiasm and the three of us had a sip or two at The Fox and Hound and talked some fuckin gooffy-ass shit about literature and the grace of an amazing wife. While at the Fox and Hound I ran into The Shield cast member Brent Roam and we talked about his upcoming appearance at The Tivoli midnight screening of Tobe Hooper's The Toolbox Murders in which he appeared alongside Sheri Moon (this week I watched hubby Rob Zombie's Halloween II and motherfucker managed to make an emotionally relevant  piece of work outta a damn sequel to a remake of a thirty-five year old movie like he was Lars Von Trier circumnavigating The Five Obstructions... gonna have to go to that screening... hmm).

I spent Saturday with Les, his wife and Cort, and we seemed to have called down the apocalypse by six o'clock when we had gales and hail outside the venue. The consensus seemed to be that as long as it looked like the end of the world as we knew it, there was nothing left to do, but soldier on. So Cort kicked things off with a brutal passage from his novel in progress Cagefighter (or something like that) - a gutsy bit about a MMA fighter's off-hours social life. Lundy followed up with his story Shootout at the K-Y Corral which is simply the most quotable story I've read this year. Les brought us all back to planet earth with his fucking hair-cut-correct story from Best American Mystery Stories edited by Lawrence Block. Shit man, only DJK could follow that piece and he did with his own bit of character rebooting Three Abortions. 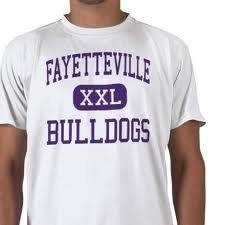 As Keaton was wrapping up Mr.'s Bill and Wiethop turned up spare from catching Ray Wylie Hubbard at The Old Rock House and we all had to start drinking again. Everybody who heard David's story needed a drink and a couple years of celibacy. Buuuut as the calendar changed numbers everybody made up - Cort and Keaton's smashed noses went a ways toward the reconciliation of their ancestors, Lundy and I buried the Fayetteville Purple Bulldogs Vs. Springdale Red Bulldogs hatchet between Les's shoulder blades, but he hardly noticed. 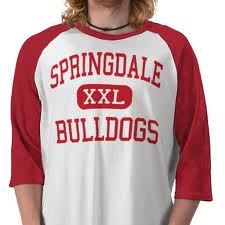 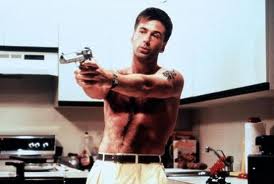 A couple hours later, Keaton drove home (putting him in Louisville about... 5:30? 6AM?) and the surviving participants congregated for water filtered through stimulants with Scott Phillips an hour before his soon to be legend podcast phone call with Mike White about Charles Willeford's Miami Blues and George Armitage's film based on the book. 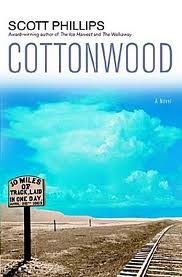 Then today, I see that Guillermo Del Toro is tackling The Bloody Benders. Fuuuuuuck. Man, I dig del Toro's films, and I love the subject, but c'mon, Scott and I were looking to start adapting his fuckalicious little whore house on the prairie novel Cottonwood for the screen this summer. Cottonwood is a fucking great book with the notorious Bender family as the sticky filling in that Ogden donut. Trying to catch a break here folks. Oh well, commence advance ticket buying.... now.

Speaking of movies - it's just impossible not to do when you get nerds like me and David Keaton in the same room and there's nobody more entertaining to listen to riffing on 'em than DJK (you want an example? Check out this episode of the Booked podcast where he guest hosts with Robb Olson and Livius Nedin to discuss Stephen Graham Jones' Zombie Bake-Off. Copious amounts of zombie lore in print and on celluloid referenced - including Keaton's own Zombie Bed & Breakfast). Anyway, in the course of our conversation Saturday night we recalled the pleasures of VHS double features and I was put in mind of one from my past that keeps coming back to me: Doris Dorrie's Him & Me starring Griffin Dunne and Tom DeSimone's Chatterbox. Yup, both about people afflicted with talking genital syndrome. Seems there's another flick with DeSimone's title coming out soon, and I hope that there's a bit of overflow attention directed toward DeSimone's odd film about a woman named Penelope whose vajay begins making noise, calls herself Virginia and even becomes a singing sensation, leaving the rest of Penelope's body far behind in celebrity status. At the very least, I hope there's a DVD release soon. This clip is all I could find on the YouTube - check it out and tell me you believe it doesn't need to be seen. 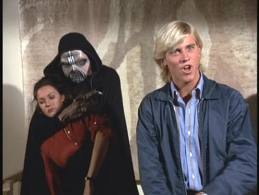 DeSimone had a career directing gay porn films as Lancer Brooks, but his output as DeSimone included the kind of direct to video sexploitation stuff that caught my eye as a youngster wandering the shelves like Reform School Girls with Sybil Danning and Wendy O. Williams, and Angel III: The Final Chapter, Concrete Jungle and Prison Girls, not to mention horror schlock like Freddy's Nightmares and Swamp Thing (TV) and Hell Night with Linda Blair and Vincent Van Patten - yup, the guy who hosted World Poker Tour and co-author of the poker-themed mystery The Picasso Flop with N@B alum Robert Randisi.

And that's how we bring things full circle kids.
Posted by jedidiah ayres at 2:39 PM

Thanks for the shout out! Did you know I wrote a whole piece about talking genital films in Paracinema? Or was that just a happy accident?

Happy accident... I'd love to read that piece.

Thanks for the shout-out, Jed. (BTW, wife's name is Mary...) You were the total, consummate host. You run a kick-ass event, complete with golf-ball sized hail and fantastic omelets. You have a pretty terrific wife yourself in Jenny and two cool kids. I wanna come back. Say... tomorrow? Thanks so much for having me, man!

Thanks, Les. Great to have you - a legend indeed