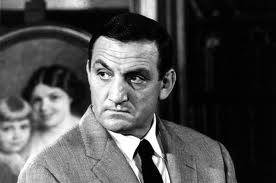 So Andrew Nette put together a list of some of his favorite criminal heroes over at Crime Fiction Lover and it's got a lot of overlap with my list from last week of stuffs Wallace Stroby's Crissa Stone books evoke for me. What do you know, but Ms. Stone makes Nettes' list and on the ol' FaceBook, Mr. Stroby officially concurs with my list of professional thievery fiction and film... and he's got another recommendation if you've seen all the flicks I mentioned - Le Cercle Rouge (or really, just about any Jean-Pierre Melville), Michael Mann's Thief & Heat, and Jules Dassin's Rififi - Claude Sautet's Classe Tous Risques which I immediately qued up and watched last night... again. Yeah, turns out I had seen this one before and somehow forgotten about it, but it all came rushing back as soon as Lino Ventura and his partner rob those guys on the street in the opening minutes of the film. 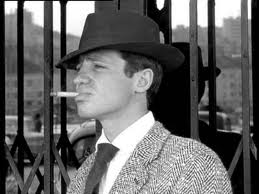 Oh, man, it's hard-bitten and hardboiled goodness. Watching the film last night, it struck me that betwixt Mr. Ventura, Jean-Paul Belmondo (who is also in the film) and Alain Delon you've you've pretty much got the three icons of French crime films of the fifties and sixties and I'm wondering if there's any French equivalent for the last twenty years? 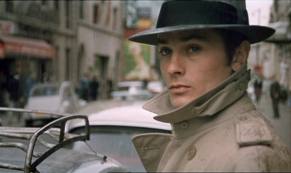 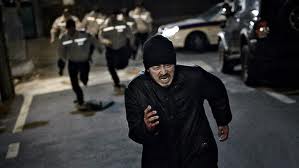 I dunno if any one of those fellas'll emerge as the Korean crime icon, but damn, they're showing up in the most consistently invigorating, envelope-shoving (hell, envelope-curb-stomping) genre films in the world. I watched Hong-jin Na's The Yellow Sea the other night and whooo. That was some attach the electrode-strobe to your nuts and and flip the switch stab-fest. Really stabby. The stabbiest. Looooved the stabbiness. No claw-hammers this time, it were all long-ass kitchen knives and tiny hatchets and let's just call it "anatomically-correct" stabbiness. 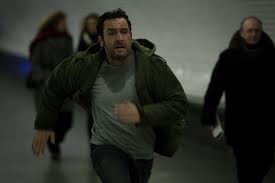 None of this Hollywood one-knife-wound-of-any-kind-anywhere-on-the-body-dispatches-anybody bullshit. Nope, you stab a motherfucker in this one, you'd better get behind the mule and plow. Keep stabbing, hacking, strangling till all the twitching stops, else that bloody pin cushion is gonna get back the hell up and do it to you.

And like Na's previous ass-kicker The Chaser, They Yellow Sea features some of the most kinetic energy released in foot-chases since, I dunno, Marathon Man, (the French scored in this category recently too with Fred Cavaye's Point Blank.)

Taking a break from movies tonight to catch N@B alum Frank Bill and Duane Swierczynski hold the swears to a minimum at the library with Reed Farrel Coleman and Sara J. Henry. Really, if you're in or around St. Louis, and don't show up tonight... You're crazy. Or Fred Venturini. Or both.
Posted by jedidiah ayres at 7:38 AM

I always liked Belmondo in "Breathless" and "The Thief of Paris." Some really top notch stuff there. As for Delon...it's all about "Le Samourai," which influenced one of my all-time favorite John Woo pictures, "The Killer."