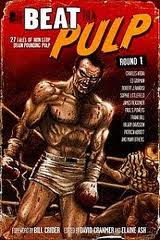 "First let's agree that the only reason we're examining this is because Jedidiah Ayres is making us do this. Nobody wants to see it, but he's an asshole." - Caleb J. Ross

Of all the stories I've had published, none have received a more vocal or visceral response than Hoosier Daddy (originally appearing in Beat to a Pulp: Round 1 edited by David Cranmer and Elaine Ash). I've read several reviews of that book that single it out as a low (or once or twice high) point. I'm proud of it - I think I've made one or two readers barf. It's the only story I've used reverse engineering for - that is, I had an ending and I needed a story to get there - because stories that hang on a sensational episode of plot aren't generally what I'm drawn to. Rather I tend to look for amazing characters who can't help but lead to something memorable plot-wise, but I had this moment... this terrible moment that would be the un-ignorable wake-up call to a fella that his relationship is doomed, if not over, and I had to then construct a character who I believed could end up in the awful predicament my guy Carl does.

Did I succeed? I dunno, but Caleb J. Ross apparently thinks so. Hoosier Daddy is included in my collection A F*ckload of Shorts and senor Ross has put together this helpful video review of the book, and included a really disgusting diagram of the awful scene. Thanks, CJR.

Watch this video, then watch Paul von Stoetzel's short film based on my story Viscosity (also included in A F*ckload of Shorts) and tell me I don't have some serious issues.

Yeah, I laughed my ass off right through that scene in Killer Joe, too.

Posted by jedidiah ayres at 9:54 PM

Don't forget to scrub under your fingernails.

The sequel is called Pink Eye

Jed, I read this in "F*ckload of shorts" and couldn't bring myself to read on for about two days. Incredible job.

Dan - It's near the front to discourage people finishing the book