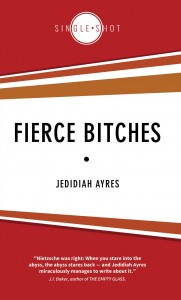 Oky-doke folks, Crime Factory Books has just posted a link for pre-orders of my new book Fierce Bitches. It's the first in their Single Shot line of novellas, and I'm really honored to be kicking things off.

Had folks say some really kind things about the book, so far.

“Powerful stuff. Somewhere between Blood Meridian and Neil Smith’s Hogdoggin’.” — Allan Guthrie
“One of the most beautiful and ambitious pieces of noir I’ve read in a helluva long time.” — Spinetingler.com
"Some of the bravest fiction I've read in the last ten years." - Kieran Shea
“Raw, relentless, and yet somehow redemptive, Fierce Bitches is like a holy rolling apocryphal, apocalyptic Old Testament text set in an unregenerately degenerate Mexico. Nietsche was right: When you stare into the abyss, the abyss stares back—and Jedidiah Ayres miraculously manages to write about it.  It’s fierce, bitches” — J.I. Baker
“Righteous, phantasmagoric and funny, FIERCE BITCHES delivers a fuckload of biblical fury.” — David Whish-Wilson
“Jedidiah Ayres proves with FIERCE BITCHES that noir has a new prince…” — @OzNoir

So fire up the ol' Paypal account and pre-order yours today... or face a fuckload of biblical fury (I love that line).
Posted by jedidiah ayres at 4:33 AM

Labels: Fierce Bitches, Patting myself on the back