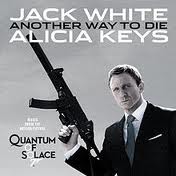 Something undeniably cool about a great theme song for a spy movie, and while they rarely produce great songs, the James Bond franchise films have given me enough glimpses of the genre's potential (the spy flick theme song genre) to wish somebody would really knock that shit out of the park. Outside of instrumental classics like Peter Gunn and Mission Impossible and the James Bond theme, I can't think of any that have quite nailed it - though yeah, that Jack White/Alicia Keys Another Way to Die song... yeah, that was pretty good.

So, here are a few songs that have officially piqued my interest in generating a spy flick theme song from these particular artists... Until they (never) come, consider this my fake spy flick soundtrack... very wah-wah heavy, I see.


Portishead - Sour Times - Clearly, the band was going for this vibe anyway. Doesn't matter. I still want to see them matched up to a proper movie.


Radiohead - Punch-Up at a Wedding - This live clip helps me hear the simplicity and drive of the riff that grounds this song. Helpful for listening to a band whose studio efforts can be drowned in layers of production.

Elvis Costello - When I Was Cruel - Dunno if E's going for spy-flick vibe or just a Portishead vibe, but I dig it.

Couldn't agree with you less about Jack White's contribution to the Bond songs, but Portishead...yeah...maybe the greatest fake spy-fi song ever.

You don't have to agree with me... You have one that worked for you?