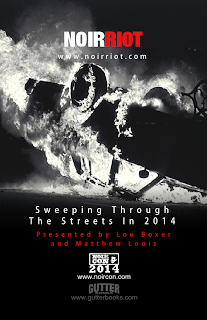 From the unholy alliance of Matthew Louis (Out of the Gutter) and Lou Boxer (Noir Con) and with some big editorial help from Cullen Gallagher (Pulp Serenade) comes Noir Riot - a biennial print and e-journal for all your dark places. Go check em out, and consider sending them something worthy. They're looking for short fiction, non-fiction and poetry.

I'm sure all the cool kids'll be abuzz with anticipation of it this week at Bouchercon in Albany. Wish I could be there to see you guys, but y'know I think a little bit of me goes a looooooong way, and I want you to be glad to see me next time.

But hey, I do have a new book on the way in the Fall and November is filling up with some very cool events I'll be defiling with my presence. First, up on November 2nd I'll be at N@B-Minneapolis with Anthony Neil Smith, Tim Lane and John Kenyon where host Paul von Stoetzel will unveil the Hogdoggin' promo-trailer and probably screen Viscosity too. It's gonna be pretty badass.


This photo from the first Twin Cities event was taken presumably before the fist fight. Read Dan Malmon's account of the evening at Crimespree online.

The very next weekend I'll be joining N@B alum Frank Bill, Hilary Davidson, Sean Doolittle, Dan O'Shea, Duane Swierczynski and Frank Wheeler Jr. (along with a few other folks you may have heard of before) at Murder & Mayhem in Muskego (about an hour outside of Milwaukee I've been told). If you'd like to avoid me I'll be on the Back in Black panel along with Megan Abbott, Reed Farrel Coleman and the Franks Bill & Wheeler. So, unfortunately, your otherwise-ace survival instincts will cost you some first-rate company. Maybe you and Kieran Shea can go stretch your legs during that panel. Looking forward to seeing Jon, Ruth, Jen, Jeremy, Tim as well as matching spouses, mistresses and gigolos that belong to the Crimespree crew. Dave Wahlman too, though, I hear that won't be happening... Be pretty amusing if he did show up with Dog the Bounty Hunter in hot pursuit. 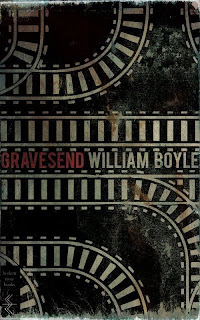 And then, and then... at least two more N@B events that are looking for solid dates to land upon. One in St. Louis and the other in a brand new and very special spot of unbelievably concentrated literary fire power. Want a hint? I'll just say that both the St. Louis and mystery city location events are likely to feature me and my Broken River brothers William Boyle and J. David Osborne.

Another reminder that the Broken River Kickstarter campaign is not a threat, but an opportunity to score some cool shit myself, senors Osborne and Boyle as well as Stephen Graham Jones, Pearce Hansen and the mysterious and kinky Red Hammond. Check out the benefits right here.
Posted by jedidiah ayres at 2:27 PM