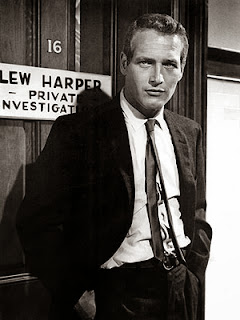 Watched Paul Newman in Harper the other night with Tim Lane. It's a favorite for both of us, and we got to talking about the similarities and differences between Newman's Harper and Ross MacDonald's Archer (from The Moving Target - the source material) and Raymond Chandler's Marlowe - just the unavoidable comparisons that were going to be made and the way the film (and William Goldman's script) approached them. They were clearly looking to create a new version of an American archetype and even said as much in the first few minutes (notice the opening scene of Harper visiting his rich old lady client is almost an exact mirror image of (Humphrey Bogart as) Marlowe's meet 'n greet with the rich old man client from The Big Sleep. Then notice that Harper's client is played by Big Sleep co-star and Bogart's off screen wife Lauren Bacall and yeah... it doesn't get much more obvious. This was the passing the torch scene). Mostly, they were aces. I like Newman and I like the movie, but I was struck this time by some of the small failures of humor. The countless eye-rolls got a bit annoying and some of the one liners were a bit off (or too on the nose). Still, I think the character and Newman's portrayal accomplished the job of bringing the loner/outsider out of a classic era and into a new one (and then leaving him there). 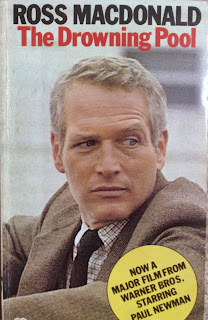 Newman made a trilogy of PI flicks (in my mind, and, I believe, in the minds of the creators they are explicitly linked) in three different decades - aging the character naturally. Three different eras, three different stages of the character's (archetype's) life. He played Lew Harper again in another direct MacDonald adaptation in 1975, Stuart Rosenberg's The Drowning Pool, and then in 1998 played a veeeeerrrrrry similar character named Harry Ross (as in MacDonald -get it?) in Robert Benton's under-seen Twilight. 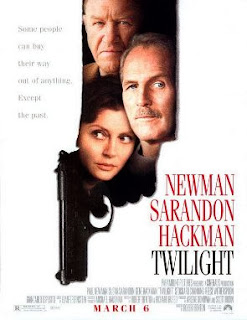 And it got me thinking... Where is the archetype now? Preserved in amber tropes? Drowning in familiarity or nostalgia? When someone says Private Eye Movie to you, what jumps to mind? Is it still something from a bygone era or is there a new version making its mark now?

I tried to come up with some examples of somebody taking up the challenge and came up with three that meet my criteria (private detective - not law enforcement professionals or amateur geniuses, movies & television only - not books, acknowledgement of the past and the tradition is fine - but can not be the focus). 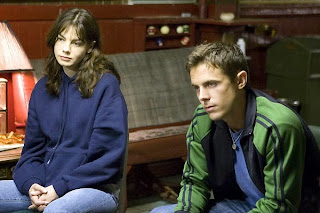 Patrick Kenzie & Angela Gennaro in Gone Baby Gone - What's still there? The individual(s) outside the law, but beholden to strict personal moral codes (the nuances of which bring about the greatest dramatic tension between the partners). What's changed? The partnership. Spade & Archer they ain't - they're much more of a team. The gender. Adding a woman to the mix as an equal partner is a big step tho the movie is clearly Patrick's. Mike Hammer and Velda they ain't. The tone is a lot more grim. Even when Marlowe or Harper got existentially sad or were bastards to somebody, the tone was at least artificially light. Now, even when Pat & Angy crack wise, it's sad and bleak. 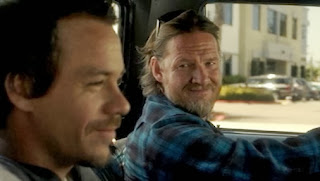 Hank Dolworth & Britt Pollock in Terriers - What's still there? The humor. God, I didn't think I missed it, but man, the chemistry between these two just crackles. The usual tropes - alcoholic, disgraced ex-cop, divorced - but hung up on ex-wife. What's changed? The attitude. Their gleeful commitment to outlawhood is just what the doctor ordered. The dress code. Nothing natty in the wardrobe, but then these guys are never going to appear in court (unless they're going to prison - which, come to think of it...) The vibe. The show only lasted one season, but it was a character drama as much as a case(ish) of the week mystery. The real pleasures were found in the details of the day to day lives of our beach-bum-knights. 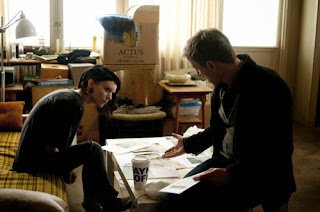 Lisbeth Salander & Mikael Blomkvist in The Girl With the Dragon Tattoo - What's still there? Everything. What's changed? Everything. Best - she's the interesting one. Worst - it's still essentially a drawing room mystery, just on the internet. I wasn't really a fan of this one, but it did strike me as a thoroughly modern PI team (they're just operating in an old-fashioned story).

So, the modern examples all seem to be teams. That's interesting to me. Feel like I must be missing a great one, but damned if I can think of more. Help?
Posted by jedidiah ayres at 11:02 PM

Man, where does everybody get ahold of that one? I've been looking for it for years.

I got mine at the library in Jersey.