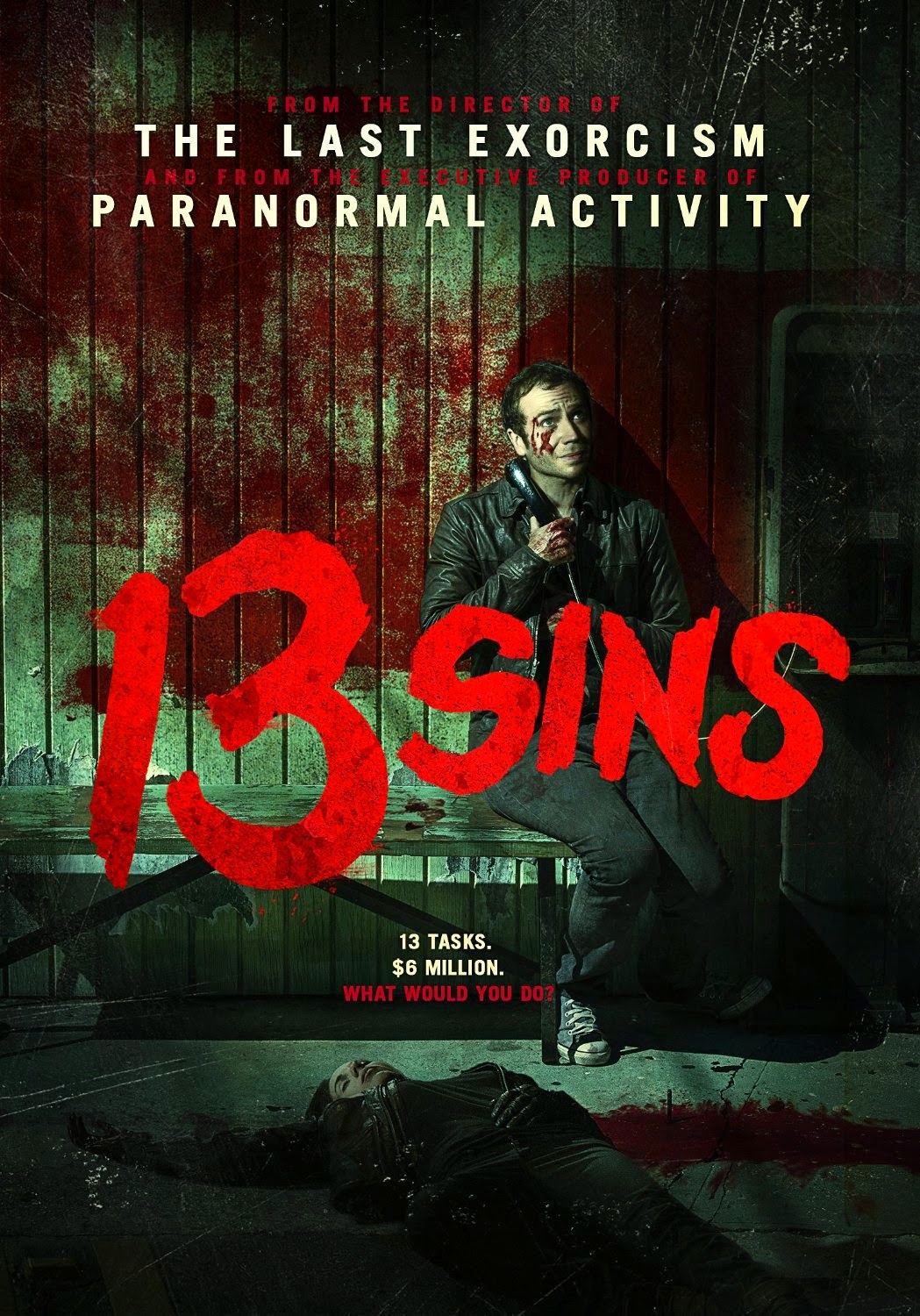 13 Sins - Daniel Stamm - Elliot is having a bad day - legit money problems, hard family situations, professional setbacks. Everything's going to shit when he receives a phone call from a mysterious source informing him that his life is being broadcast for the entertainment of a buncha bored, rich fucks who run the world and he can win a lot of money if he plays along with an escalating series of challenges. This one's an English language remake of Chookiat Sakveerakul's 2006 Thai language film 13: Game of Death, and I seem to be making a bad habit of catching the remakes first after last month's We Are What We Are viewing (tho, WAWWA wins handily in quality), but y'know what? It's actually the fierce, fresh energy of E.L. Katz's Cheap Thrills that made this one feel like warmed-over fare. Best moment: the opening limerick bit was fun, but the motorcycle ride wins. 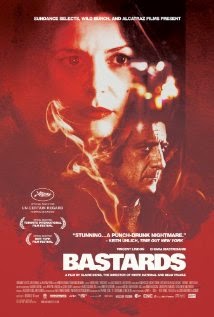 Bastards - Claire Denis - The plot of Bastards is languidly revealed over the run time and concerns the fall out from the death of a man we never meet. The dead man's wife, daughter, brother in law, business partner and business partner's wife and young son all factor in, tho the construction of the film feels, at times, like a collection of disparate vignettes not going anywhere in any particular hurry. In the end, it earns its title and is... fuck. It's a little bleak. Though I enjoyed watching Vincent Lindon and Chiara Mastroianni look like an alternate yesteryear pairing of Bryan Brown and Susan Sarandon in a moody exercise in sexy doom, the payoff didn't quite justify the mental investment for me, and emotionally I'd been cut off fairly early. Best moment: answering the phone in front of the babysitter. Awkward. 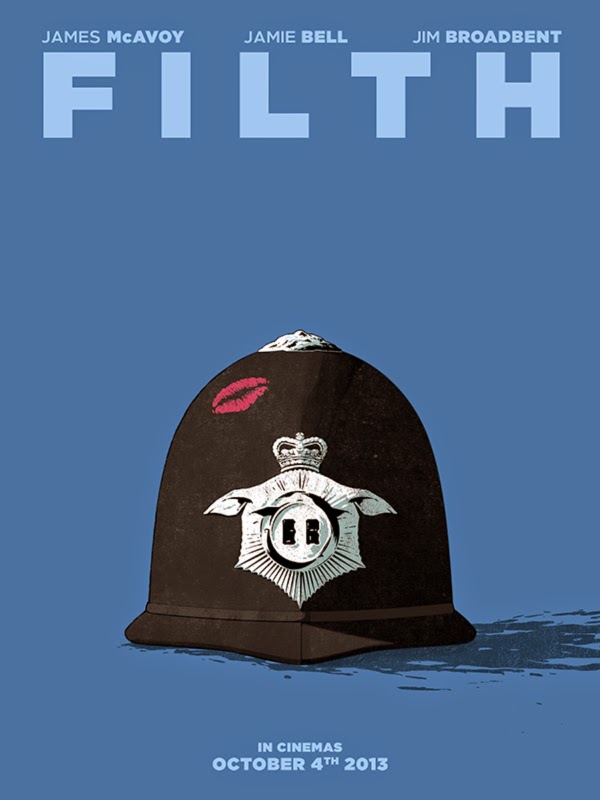 Filth - Jon S. Baird - Right from the start we know something is off about Bruce, the monstrous homicide cop at the center of the action, in this adaptation of Irvine Welsh's 1998 novel of the same name. As out of control as his behavior appears (copious drug use, ugly and impulsive sexual behavior, violent abuse of the power his job affords), control is precisely what he is in search of. His power games with paramours, co-workers and criminals come together to promote his particular agenda (a promotion he believes will win him back his family). The dual escalation of self-destructive behavior and Machiavellian manipulation of everything and everybody around him leaves Bruce a tad, um, unhinged. The cast is full of ringers - Eddie Marsan, Jamie Bell, Shirley Henderson, and Kate Dickie, but man, this one made an overnight James McAvoy fan out of me. I'd never understood the effusive praise thrown after his (fine, but unremarkable, in my opinion) previous work by folks whose opinions I'm oft in alignment with, and when I saw he'd been cast in the lead role here, I was more than a little skeptical. But hoah shit, does he bring the energy, lechery and most importantly, the feels to this one. Yes, holy fuck! the feels! The final fifth the film pulls every string together for a surprisingly effective and emotionally complex finale that is punctuated by the Best moment: a superb animated end-credit sequence set to the Billy Ocean song Love Really Hurts Without You. Fucking wrecked me. Believe it. 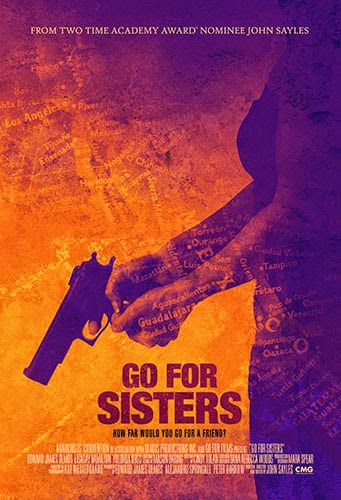 Go For Sisters - John Sayles - Bernice (Lisa Gay Hamilton) is a parole officer whose work causes her path to recross with childhood friend Fontayne (Yolanda Ross), a parolee trying to put her life back together. When Bernice's son, a former soldier, goes missing (most likely kidnapped) in Mexico, she enlists her former friend's help in tracking him down. Along the way the duo hire a private detective (Edward James Olmos) and get in over their heads with dangerous people, but the bond between the women proves surprisingly strong and provides a very satisfying main course for the film. The actors ultimately rescue what could have been an exercise in trope subversion (I know - this time the detectives are black women, looking for a young boy who's disappeared) and elevate it to one of the best dramas, let alone crime films I've seen this year. And Sayles certainly deserves credit for that - I don't mean to suggest that he only wrote a cute send-up of the mystery genre - I'm sure he meant for it to be more than that - but without the great performances and chemistry between performers, that's all we'd have. Best moment: the opening scene of Bernice at work hearing stories from parolees is top notch scene setting and character building and both Hamilton and Ross are amazing to watch. 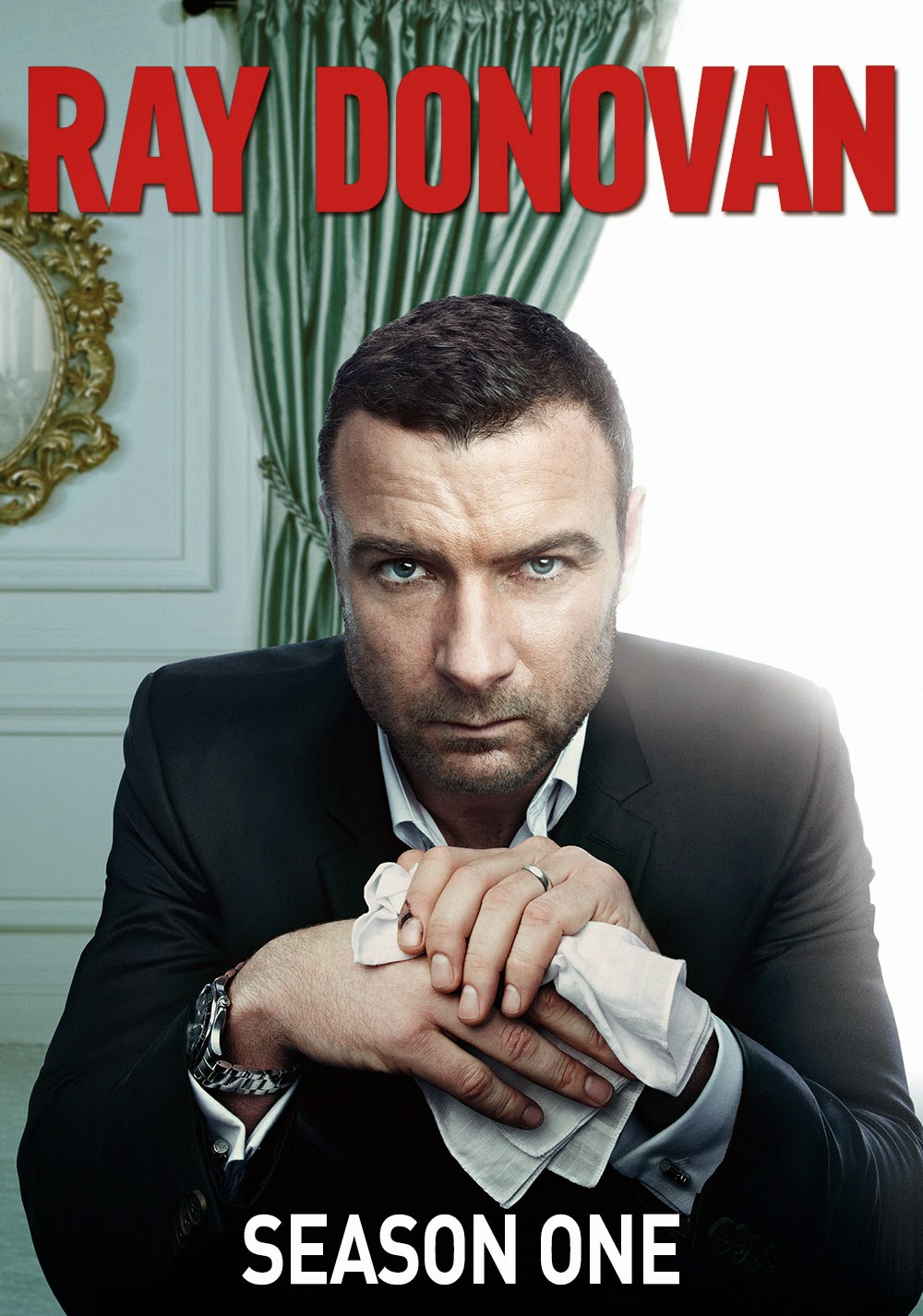 Ray Donovan Season 1 - Ann Biderman - Tough Southie family relocate to L.A. where eldest brother Ray (Liev Schreiber) is a Hollywood fixer, middle brother Terry (Eddie Marsan) runs a boxing gym, Bunchy (Dash Mihok) the fuck-up brother generally fucks up and Daryll (Pooch Hall) the surprise bastard is looking to join the family. Pop Donovan (Jon Voight) springs early from a prison sentence for murder and shows up in Los Angeles like an oedipal bomb ready to blow up the lives of his fairly fucked up family. This is all terrific material for a crime drama and the cast is generally solid, but goodness gracious the punches pulled throughout in order to preserve a character's life or (worse) their likability should be collected along with those yanked by oft-offenders like Sons of Anarchy and constructed into the most badass TV show ever. This one keeps sticking it's neck out in grand dramatic gestures only to have the status quo spared any real consequence and... ugh. Ray fucks around on his wife, but we're not sure if he's a serial philanderer or if it's a special occasion - the storyline is treated with importance until it's pretty abruptly over, Ray wants his father gone and preferably dead throughout the series, but hey, guess who's around for season 2? Ray has his half brother beaten up (by Steven Bauer in maybe his best role ever) which should royally fuck up Daryll's fight career or at least cause some ugly tensions between the siblings, buuuuut nope, it's all swept away and forgotten, Ray pulls a gun on a neighbor kid who hurts his teenaged daughter, but uh, um, yeah, nothing comes of it... it goes on and on and I don't want to get into spoiler territory, but the really egregious ones lie in that realm. I want to like it. I'll give season 2 a chance because a lot of my favorite shows have taken huge steps forward with their second seasons, but I dunno, I'm not too hopeful. Best moment: Voight gets a lot of great throwaway moments, but only one that really sticks the emotional landing - the ultimate fallout from a fumbled bit of psycho-sexual role-play with Rosanna Arquette. 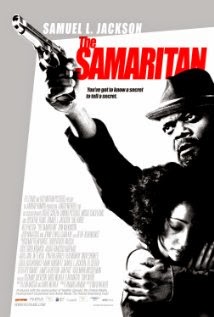 The Samaritan - David Weaver - Ex-convict, ex-conman Foley (Samuel L. Jackson) tries to put together a decent final act to his sad, wasted life upon his release from prison. Unfortunately it doesn't seem like Foley has ever seen a movie or read a book because he steps right into the plot of every ex-con/con plot ever and isn't even warned off by the way everybody talks like they're in a phonics-for-grifters production of how-to-tell-if-you're-"the mark" (hint: you are - you always are)... which is a pity, 'cause beneath the hack note-heavy production (you can pretty much see the studio notes imposed as subtitles in every scene: "More cool grifter slang") lies a decent story that could have, if handled like one of the exercises in genre deconstruction/execution somebody like Steven Soderbergh is want to do, delivered some solid lurid thrills and maybe even produced a feel or two. Best moment: Tom Wilkinson reaps an ice harvest. 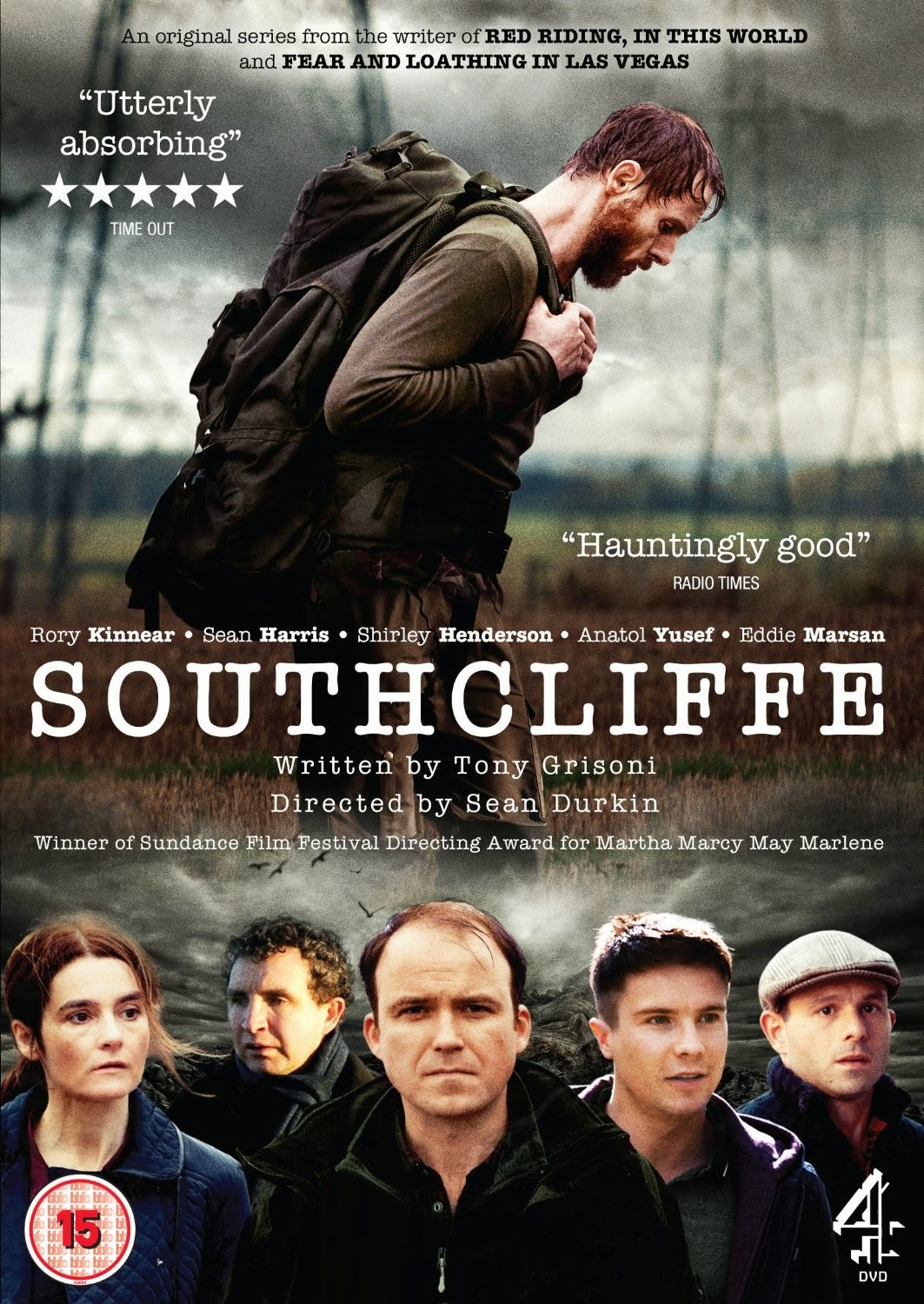 Southcliffe - Sean Durkin - Long film/miniseries about the fallout from a shooting spree mass murder in a fictional small British market town. Following a cast of characters including the shooter, some survivors and a journalist covering the tragedy, it's a bit of an awkward balance of stories not quite forming a cohesive whole, but each containing nuggets of gold that I suspect could have been followed to a rich vein. Hard to say what doesn't quite gel here - the cast is strong (Eddie Marsan and Shirley Henderson as a couple for the second time this month, Boardwalk Empire's Anatol Yusef, Rory Kinnear, Sean Harris and Joe Dempsie all feel like they deserve their own film) the tone is appropriately dour and the subject matter compelling, but the parts are ultimately greater than the whole. It seems to lack a focus, a prime channel for our undoubtedly aroused feelings to funnel through, and instead of a good stream of emotion we end up with a sporadic drip from several ends of a colander. Or perhaps it's simply too long a time to invest in a single down-beat slog through grief, guilt and tragedy. Without enough warmth and light to remind us what we're missing, the overbearing cold and dark loses its impact after a couple of hours (did I mention this is a mini-series?). After the very effective and haunting Martha Marcy May Marlene, where Durkin produced all of the emotional impact sought after here in half the time, Southcliffe feels like a well-intentioned mis-step that does nothing to dampen my interest in his next film. Best moment(s): the various scenes of communal emotional synchronization via popular music - whether at a party, a funeral, or a wedding - are all kind of wonderful and taken together might boil down the essence of the film(mini-series) into a potent bitter-sweet pill. 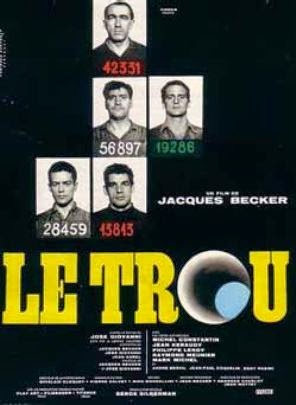 Le Trou - Jacques Becker - Four prisoners well on their way to executing their carefully constructed escape have their plans upset by the sudden arrival of a fifth cellmate. Can they trust the new guy? Do they have a choice? It's a simple and meaty enough question as any to build a half-dozen stories on, but I don't know if you'd ever get a better result than this masterful exercise in onscreen tension. Aside from the very literal pot in which the situation simmers and the nerve-jangling procedural aspect the film employs, the relationships between the men are explored naturally and satisfactorily in the (mostly) single room setting. Watching this one back to back with Robert Bresson's A Man Escaped might just crack your teeth. Best moment: the floor-smashing sequence is one of the most unbearably tense sequences I've ever seen on film. Unlike the silent heist scene in Rififi, this one is constant back and forth of loud, QUIET, loud, QUIET, loud, QUIET and not fed to us in a montage of edits, but done in real time with each character shuffling through their slot in line, doing their part, and becoming alternately physically exhausted spiritually elated to match the viewer's experience.

I've followed up on more than a few of these movies over the last couple of months. Thanks. The other night I saw a film called 'Starred Up' (2013) - a prison drama that completely slipped past. Figured this would be right up your alley. Have a look.

Thanks, Iain. Starred Up is waaaaay up there on my anticipation list. Looks terrific and I'm damned jealous you've already seen it.