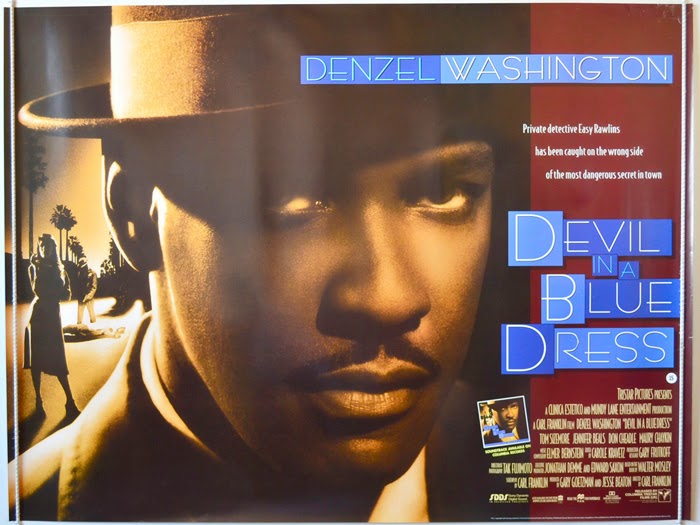 Devil in a Blue Dress - Carl Franklin - Ezekiel Rawlins, a black veteran, is hired by the deep pockets to find a white woman who frequents the negro joints in post-war Los Angeles, a case with implications that go to the heart of a political battle. It occurred to me while rewatching this one that the only real interest I've got in PI stories right now have to do with characters well south of the mainstream and I found the film far more engaging this time around, having not seen it since the mid-nineties. Franklin and Walter Mosley - upon whose book the film is based - were the reasons I was interested in revisiting it, but damn if Denzel Washington ain't the glue holding everything together. His Rawlins is a man of adaptable morality playing the game, vulnerable and opportunistic by turns, smart, but desperate enough to do stupid things. It's also a terrific looking film and the dynamics between Washington's Rawlins and Don Cheadle's Mouse are so great, it's a shame there weren't a couple of follow up films to explore their relationship and world. Best moment: Mouse asleep with a gun. 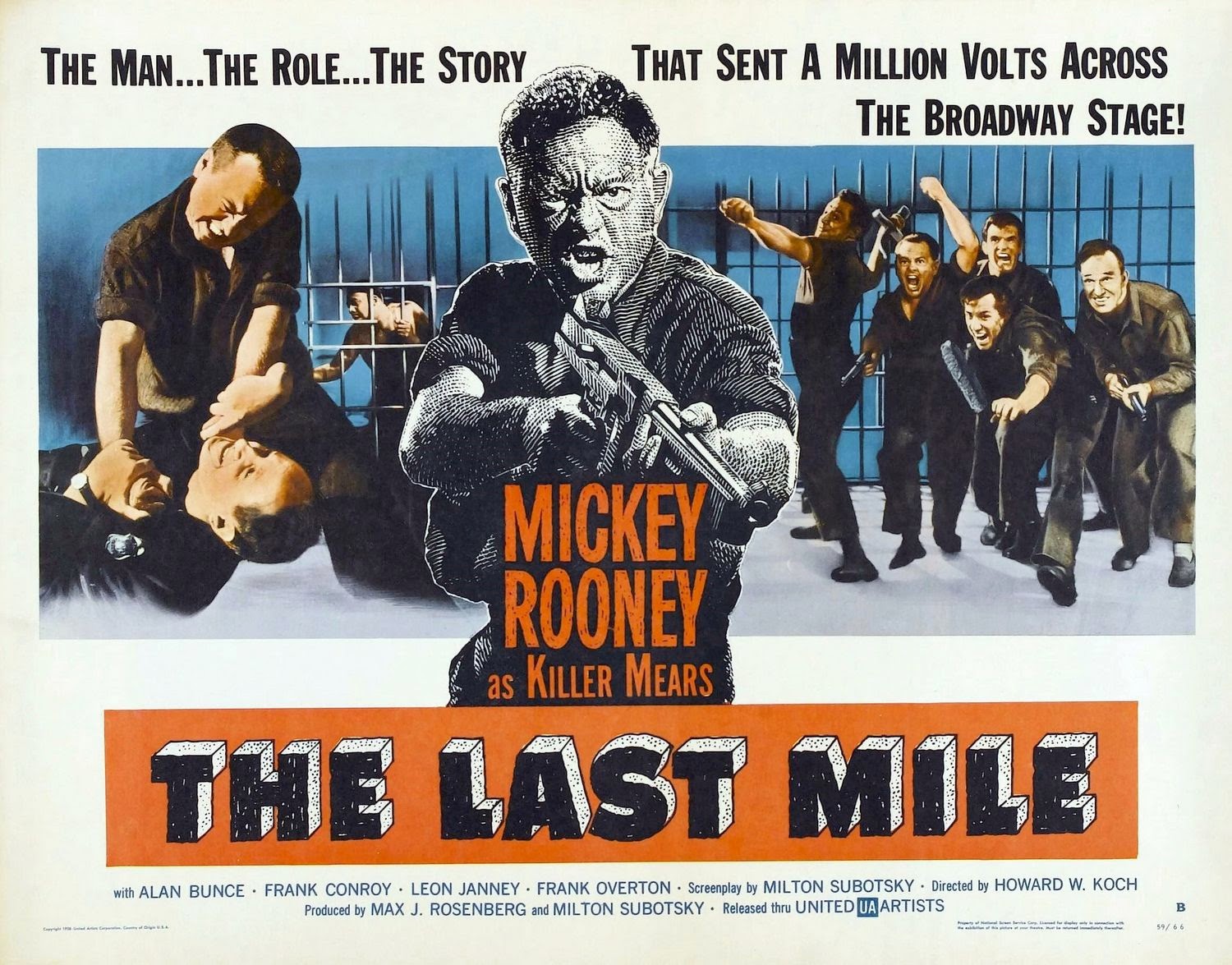 The Last Mile - Howard W. Koch - A group of death row inmates led by Mickey Rooney stage a breakout on the eve of an execution. It's an awfully talky film, the second screen adaptation based on the stage play by John Wexley and one whose first two acts are steeped in mortal dread that fuel the third with enough angst to go with the implausibilities and over the top acting. Rooney is great and could chew through the bars with his facial ticks. It's no Brute Force, but once the film gets to the violence it's very watchable. Best moment: call the warden. Metro Manila - Sean Ellis - Oscar (Jake Macapagal) is a rice farmer who moves his family to the big city when he is no longer able to support them working the fields. The urban jungle is no kinder to them, but both parents are desperate enough to work dangerous and demeaning jobs to support themselves and their family, she as a topless dancer in a sleazy club where prostitution is pretty much a job requirement and he as a driver in an armored car service where he'll be a target for criminals with nothing left to lose and who don't mind shooting it out for a chance at the cash and valuables he's moving them from point-a to point-b (and if you've ever seen another movie, it'll come as no surprise that he faces just as much or more danger from his co-workers who want that money just as much as anybody else). After digging the Filipino export On the Job so hard earlier this year, I was ready to dive into another crime flick from the hard heart of the city and this one delivers, even if it swerves a little hard into the innocents forced to do bad things genre at times. Beautiful and gritty and emotionally engaging - highly recommended. Best moment: Oscar's job interview. 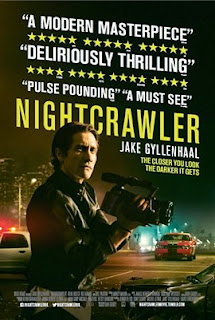 Nightcrawler - Dan Gilroy - Louis Bloom, a petty thief and sociopath finds a chance to realize his outsized ambitions as a freelance crime journalist, which is a plot line that has been used in plenty of films special and unremarkable ones alike. So what makes this one stand out? A sharp script and an electrically-charged lead performance from Jake Gyllenhaal. In fact Gyllenhaal is so damn good in the role, I'd seriously consider going to a motivational conference led by him as Lou. Hell, I want a book on tape from him almost as much as I want one by Kenny Powers. It works best/most as a character study and less as the media satire I've been a little puzzled to hear it interpreted as being. Many smarter and more eloquent types than me have heaped praise on this one, so I won't bother adding to the hubbub, but it's a serious contender for top honors over here. Best moment: Bloom and Nina (Rene Russo) have a date. 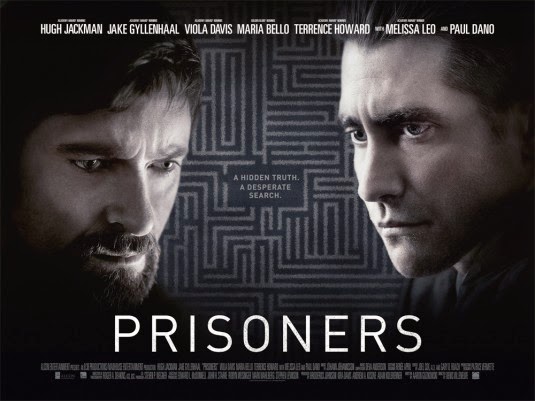 Prisoners - Denis Villeneuve - The young daughters of two families disappear while the families celebrate Thanksgiving and the only lead the police have is the vehicle of a strange man spotted in the neighborhood at the time. As days drag by with no sign of the missing girls one of the fathers takes drastic and illegal action to find them, frustrated by perceived ineffectiveness of the police. What follows is a fairly suffocating morality thriller that probably has good points to make, but lost me somewhere in the heaviness of hand. I dunno, maybe it was just my mood that day. Not without merit though - both Hugh Jackman and Jake Gyllenhaal give good performances, though if I go the rest of my life without seeing Paul Dano in another role like this, I'll consider myself lucky. Best moment: probably somewhere in Jackman's guilty, angry red-rimmed eyes. 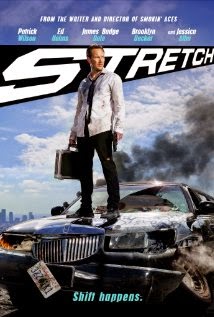 Stretch - Joe Carnahan - A limo driver working off a gambling debt and a broken heart learns he's got one night to settle everything, but it's either going to be a hell of a bad night or a waste of time as the subject for a film. Could it be both? I dunno, the studio seemed to think so - dumping it unceremoniously to Netflix without a hint of publicity or promotion. I prefer to think of this one as a low-budget lark, Carnahan just having fun, rather than a failed commercial comeback vehicle for the man behind more high-profile derailed projects of promise than I know (whatever happened to his adaptation of Mark Bowden's  Killing Pablo w/Benicio Del Toro as Pablo Escobar - that was a thing, right? - or his adaptation of James Ellroy's White Jazz w/George Clooney as Dave Klein, or his adaptation of Lawrence Block's A Walk Among the Tombstones w/Harrison Ford as Matt Scudder, or his Mission Impossible 3 or???). Whatever frame the picture is in, it's the picture itself that should be considered and what we've got here is a star-studded, half-smart-assed thriller that doesn't pull everything together in the end, but has plenty to enjoy on the way there. Patrick Wilson is used particularly well here and I enjoy the way Carnahan chooses to cast Chris Pine - though he had more fun in Smokin' Aces. Slight, but not completely without charm or wit. I'd rather see more like this than another A-Team movie. Best moment: appointment at an orgy.
Posted by jedidiah ayres at 2:20 PM

"In fact Gyllenhaal is so damn good in the role, I'd seriously consider going to a motivational conference led by him..." Brilliant.