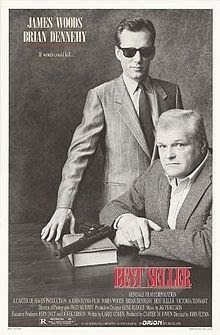 Best Seller - John Flynn - Brian Dennehy plays Dennis Meechum, a cop who's book about a famous robbery has made him a lot of money, a good reputation and the target of a professional killer named Cleve (James Woods). Cleve doesn't want to bump off Meechum - he wants Meechum to write the story of life in a tell-all book designed as a tell-all revenge bomb for the powerful man he's been working for, only Meechum is tough to convince. He's a grump. He's Brian Dennehy for fucks ache. Cleve tempts Meechum with tasty crumbs of the story and the two hit the road for a tour of Cleve's secret life's work while a string of heavies sent from Mr. bloody white collar (Paul Shenar) try to keep it all buried. It begins with a tense, gritty, no-flash heist sequence that had me hoping the film was going to amaze me, but five minutes later features one of the strangest action set pieces this side of Prime Cut that introduces Woods and after that? Well, it's a bit of a mixed bag ping-ponging between gutsy moments and gonzo ones. Always love Woods and shit, can I just say that I love living in a world where Brian Dennehy was a fucking movie star. In the body of Flynn's work this one lands in the middle... Which is saying something. Best moment: the opening heist. 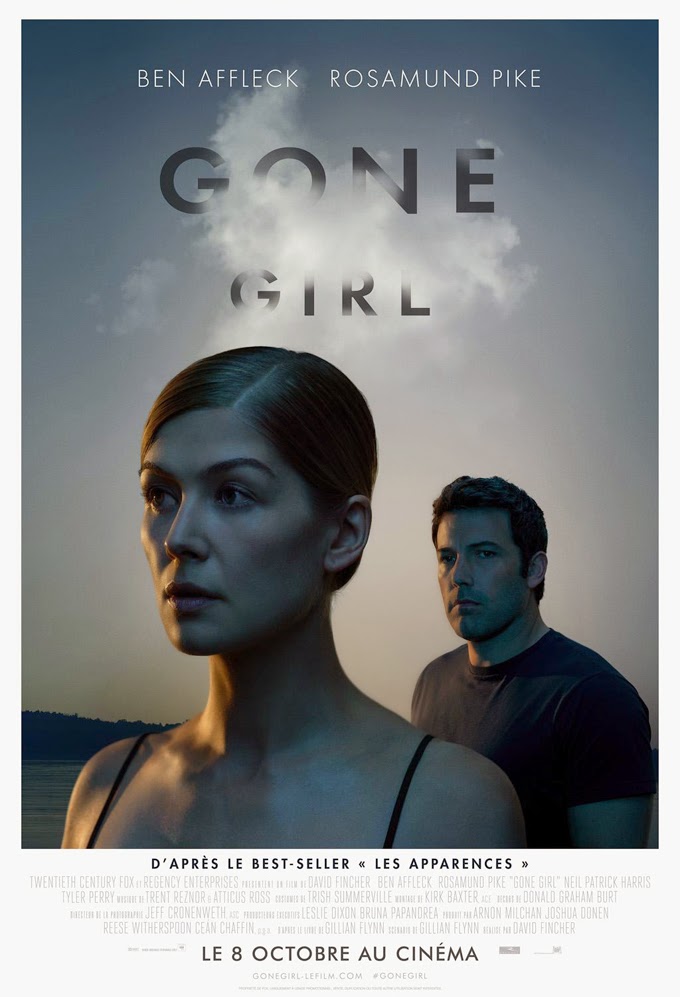 Gone Girl - David Fincher - The Dunnes (Rosamund Pike & Ben Affleck) have a model marriage - not in the sense that it's one folks should model their own upon, but in the sense that I once had model airplanes. It's a replica. Something a collector might appreciate. Looks good and accurate from all the outside angles, but does not function like the thing it apes. When she disappears one day, his life falls apart in a very public way. First he's under pressure then suspicion and finally the thumb... only... whose? As the details of their rather sordid inner lives are exposed to the viewer, our sympathies never solidly latch on to either character - one is a sick pup and the other might have coming what they get (or at least you don't feel too awfully bad for em when it comes) - and pulling that off while pulling us in? That's a neat trick and I kinda hate that it automatically qualifies it as ballsy for a tent-pole release from a major studio, but it is. Does it work? Sure. Yeah. I think so. Though, it's essentially a '90s straight to video sex thriller with A-list talent in front of and behind the camera. Not that there's anything wrong with that. I happen to like sex thrillers from the 90s. I'm just saying... if it were Joanne Whalley and Michael Madsen in a flick directed by John Dahl (still based on the novel by Gillian Flynn)... I might've been a lot more excited by the results. Still - damn, what a cast. Solid lead performances and top-notch supporting turns from Kim Dickens, Carrie Coon, Neil Patrick Harris, Patrick Fugit, David Clennon, Lisa Banes and Tyler Perry (no, really). Best moment: probably the only NPH sex scene outside of another Harold & Kumar flick I'll ever need. 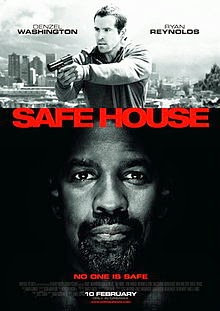 Safe House - Daniel Espinosa - Called this one one of my favorite flicks of the year a couple years ago and upon revisit... it stands up. Deep as a puddle, but man, it makes a great splash. Solid, hard-nosed action that snaps, crackles and pops like a Michael Mann or a Peter Berg joint and a good cast not embarrassing themselves. However... since I already spent a post or two praising this one, I'm gonna give a couple of suggestions as to how it could've been even better. Ryan Reynold's character is our eyes in to this situation. He's as close to an everyman as this film has and they play him as that for our sake - they focus on his relationship with his lady and his career frustrations in order to... have us identify with him somehow? As the film roles on he's revealed clearly to be not an everyman... which is the point. Or should have been. If the flick did that other thing that Michael Mann films do well - show us professionals being professional and not over-explain anything to us - this would've been even sharper. Shit, the closer it could be to a silent (or really dialogue-less) picture the better. And there's the other missed opportunity... cutting out all the expositional chatter within the CIA operation and just observing would've made the flick feel much smarter. Action, like humor, shouldn't have to be that explained - both lose impact with over-explanation. Then switch the roles Brendan Gleeson and Vera Farmiga are playing and bam - super awesome flick. But these are nits that I'm picking at. Espinosa made a very impressive English language debut with this one - after his truly great Swedish flick Easy Money (from the Jens Lapidus book) - here's hoping his next project, Child 44 (from the Tom Rob Smith novel) makes him three for three. Best moment: this time around I was particularly electrified by the safe house shootout sequence with Robert Patrick's team. 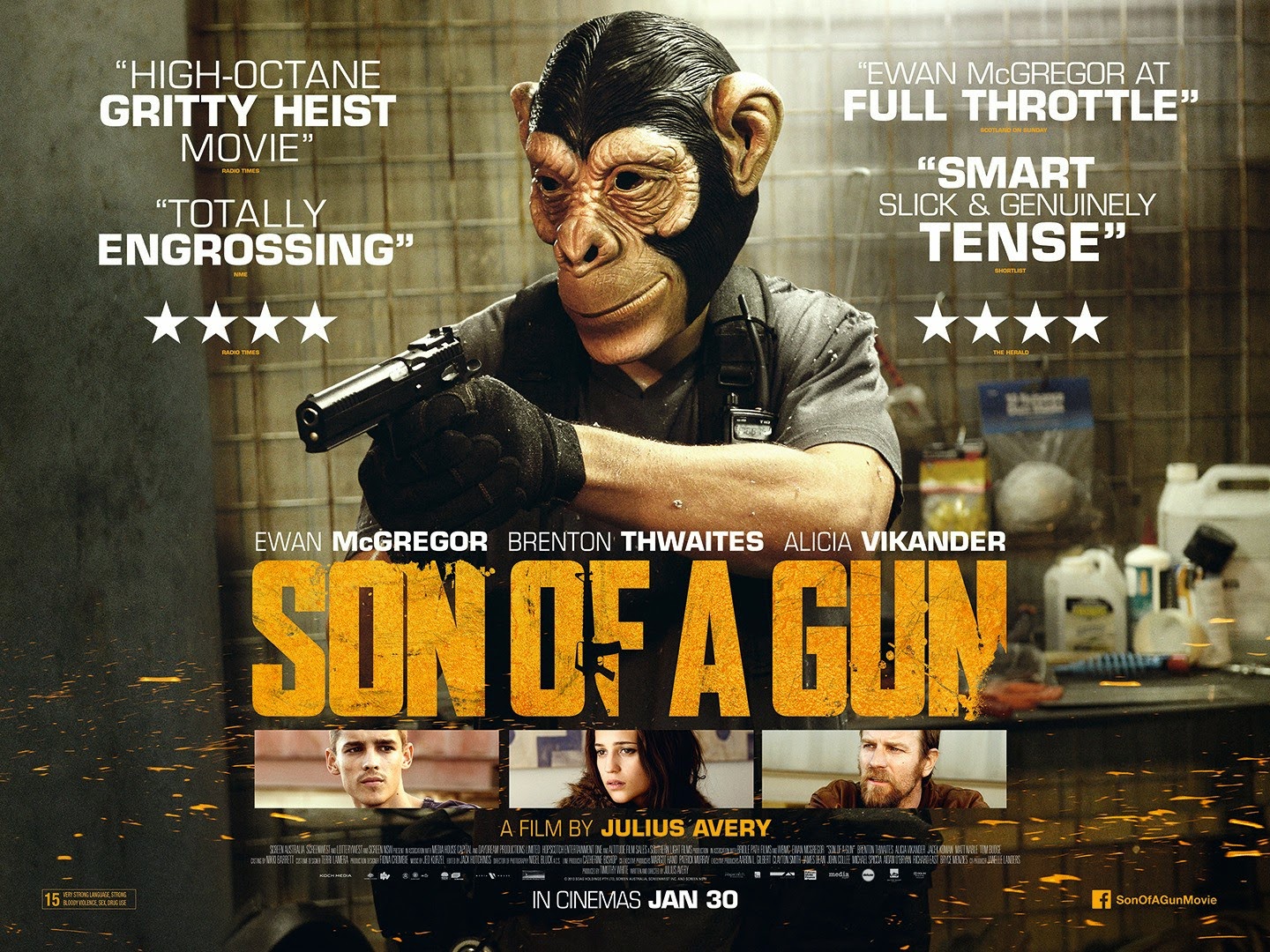 Son of a Gun - Julius Avery - A bright young kid in prison (Brenton Thwaites) is taken under the wing of a professional thief (Ewan McGregor) who protects him on the inside in exchange for the kid executing a plan to break his mentor out once his brief sentence is over. Once everybody's outside it becomes a heist flick and a double-cross-a-thon. Sure it's not new territory, but it is fertile, if not hallowed, ground and covered with competence, conviction and a minimum of bullshit. Hard edged and nasty, but not overly hardboiled or cartoonish, this picture has prison fights, shootouts and armed robbery, but has chops enough to make each fresh and intense - wait, lemme put it this way: this film has a genuinely thrilling car chase. I just said car chase and thrilling in the same sentence. In a non automobile-centric film that's damned impressive. It's because the action is integral to the story and a natural part of the characters' lives which we're invested in and not (only) because it's so well executed. Adding tremendously to the atmosphere are supporting turns from Matt Nable, Eddie Baroo, Sam Hutchin, Tom Budge, Jacek Koman and Damon Herriman in full Dewey Crowe drag, but feeling dangerously unbalanced rather than pathetic. The soundtrack, the photography and the unforced atmosphere that manages to simultaneously hold excitement and dread, cold-bloodedness and tenderness point to a sure hand's crafting. No idea if Avery's interest lies in crime specifically, but here's hoping. It's a kick ass debut. Best moment: Sterlo (Nable) gives the kid life advice. 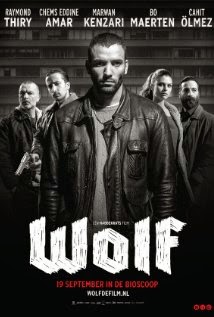 Wolf - Jim Taihuttu - A first generation immigrant to Denmark fights for his place in the world through petty crime and kickboxing. But damn. It plays better than that. Just... trust me. It does. Love the black and white photography, the familiar/exotic urban setting, and the assurance that the character's struggles are universal. For Majid (Marwan Kenzari) the biggest obstacle to his own happiness and success is himself. He's stronger in character, smarter, more level headed and patient than his friend Adil (Chems Eddine Amar) who wants everything he believes comes easily to Majid, but Majid is a dumb fuck to most of the world - hotheaded, ignorant and brutish. The balance of perspectives is well handled and Majid's confusion in the world and horror at his own self-destructive actions are shared by the audience. Every opportunity looks very different from the base and the summit, as does every price and consequence. Kind of an anti-Rocky. Best moment: the armored truck heist is pretty great - ballsy, tense, sloppy, brutal. 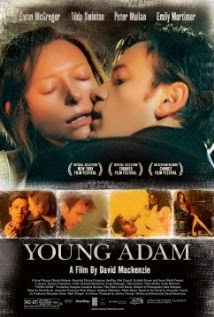 Young Adam - David Mackenzie - Joe and Les, two barge workers in 1950s Scotland (Ewan McGregor and Peter Mullan), pull the body of a young woman out of the river one morning and provide a brief interview for the police, before getting on with their work. Joe is restless. He works for Les, whose family owns and lives on the boat, and shares a mutual sexual attraction with Les's wife Ella (Tilda Swinton). Soon Joe and Ella's affair is too flagrant to ignore and Joe takes Les's place in the world. Rather than satisfy Joe, this only makes more apparent the great sucking void at his core and soon Joe is following his dick whatever direction the erotic wind blows. A crime story on some level, it's better described as a noir - a cynical look at the character's drive and ultimate solution for pain-coated emptiness: indifference. Downbeat, elegantly drab and nasty, it may not have needed the NC-17 rating to make it instantly evaporate from popular consciousness, but it's these elements coupled with an amazing cast (including Emily Mortimer), the well-deserved critical lauding of director Mackenzie's latest flick (the prison drama Starred Up featuring Ben Mendelsohn and a breakout performance from Jack O'Connell) and the new medium of streaming video that make it ripe for a rediscovering (which may extend to the source novel by Alexander Trocchi). Best moment: Les confronts Joe and Ella. 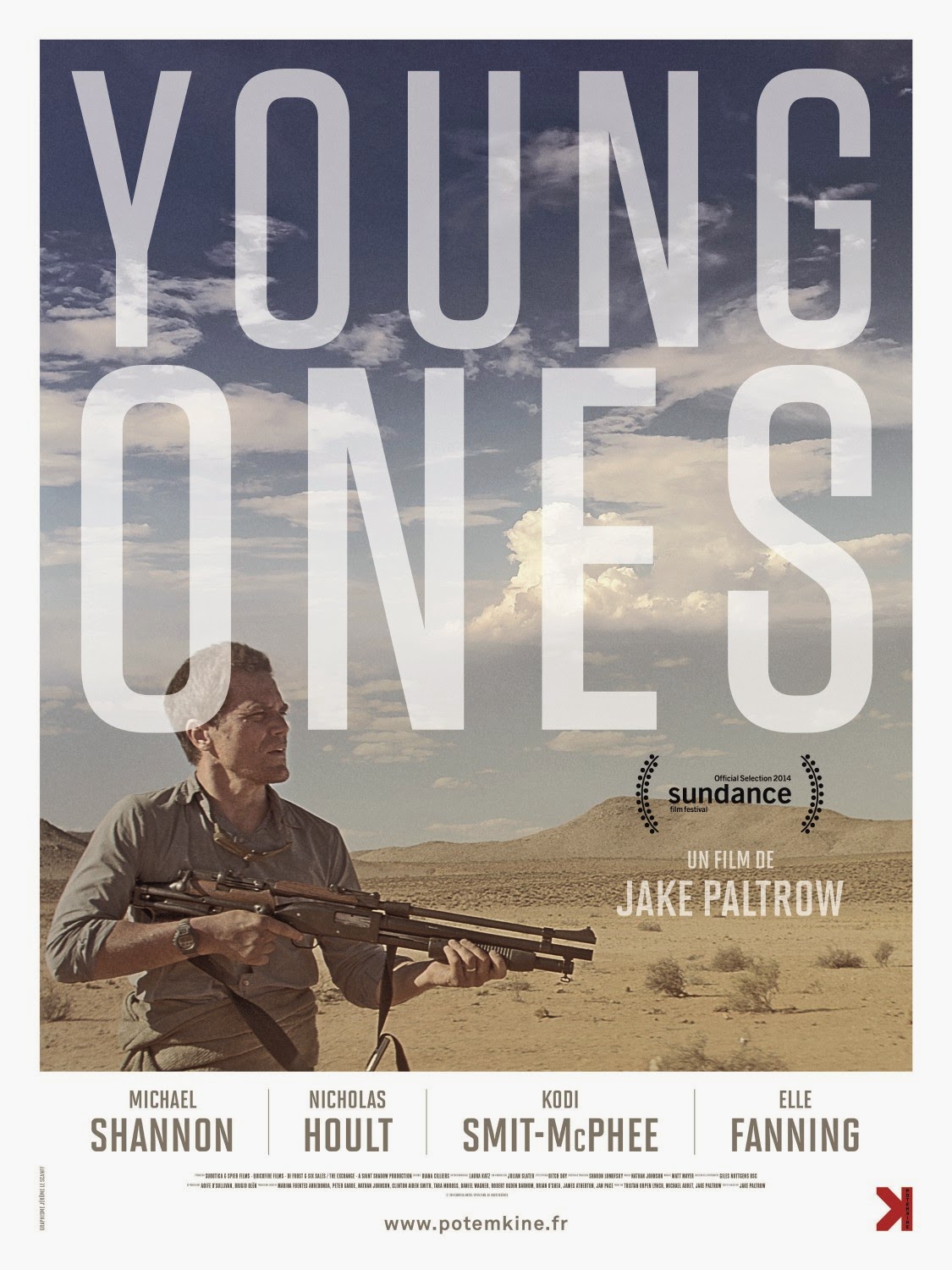 Young Ones - Jake Paltrow - A community of hardy and resilient, if desperate, folks eke out a hardscrabble existence in a drought-plagued near future. Among them, Ernest (Michael Shannon) who runs a mobile mercantile with which he supplies the government workers who divert the water supply to more populated areas, Flem (Nicholas Hoult) an ambitious farmer with a vision to make the land fertile again and Jerome (Kodi Smit-McPhee) the son of Ernest, torn between his father's and Flem's ideas and ideals. The film's structure gives each character their own chapter in a more or less linear narrative that adds up to something resembling a novel more than a film, but holy crap, what a movie. Couldn't believe I'd not heard of this one at all before it popped up on Netflix, but I gave it a blind try and watched it in a single sitting - more and more rare, kids. Afterward I looked for reviews and was puzzled by the tepid to cool critical response I found online. Sounded like folks were disappointed that it didn't do more large-scale Hunger Games-style dystopia world-building - something the film clearly has no interest in doing. Did they see the same film I did? Maybe it's just the onslaught of YA-future-scape pictures souring their appetite for anything not set in the here and now, but I'd say this has far more in common with say John Steinbeck than Suzanne Collins. It's a small-scale, lived-in, neo-dustbowl sci-fi/western family saga full of great visual touches, wide-open spaces and dark implications. Do yourself a favor and get on this one pronto. Best moment: Ernest and Flem speak plainly.
Posted by jedidiah ayres at 1:26 PM