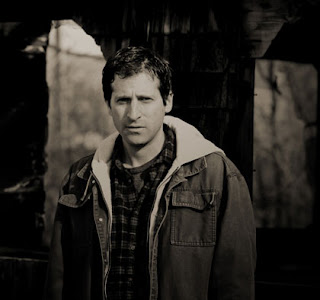 Jon Bassoff the publisher introduced me to some far-out psycho noirs: The Disassembled Man, which he later fessed up to penning himself under the pseudonym Nate Flexer, While the Devil Waits by Jackson Meeks, Rabid Child by Pete Risley, The Rapist by Les Edgerton, The Bastard Hand by Heath Lowrance to name a few. Bassoff as an author has proven it's his thing and that he's a contender for the heavyweight title with Corrosion, Factory Town and his latest, The Incurables. Each features doses of bad religion, unwholesome sexual obsession, chemical-alteration, foaming madness and wanton violence and I asked him for a list of his favorite psycho noirs - here's what he sent back... 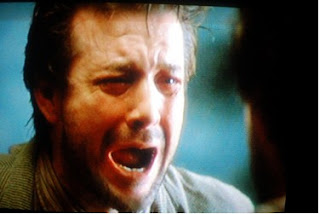 There’s a scene near the end of the great Alan Parker film Angel Heart where Harold Angel (played by Mickey Rourke) stares into a mirror and repeats the line “I know who I am” over and over and over again. Each time he says the line there seems to be a new understanding of who he really is, a new understanding of his own depravity. And ultimately, that’s what the best psycho-noir films and books have in common: the gradual realization of evil. Sometimes, as in Angel Heart, it’s the protagonist himself who makes this discovery, his own narrative of rationalization and self-deception shattered by some truth that is too overwhelming to dismiss. But just as often our psychotic and usually murderous protagonist is able to maintain a narrative of apparent rationality or even superiority, and it falls on the reader to discover his true nature. 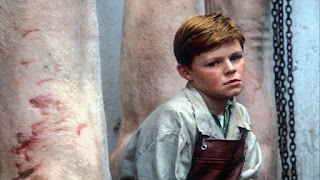 Traditional noir films and novels often time revolve around a protagonist who makes a fateful decision that ultimately leads to his downfall. Usually this decision is triggered by lust or greed, and we are able to relate to the downfall because we have often found ourselves peering over the cliff, contemplating the jump. By contrast, in psycho noir there is typically not a single fateful decision; instead, our protagonist’s fate is determined by his own innate wickedness or psychosis that cannot be repressed. While noir fiction often time employs an unreliable narrator, with psycho-noir it is a near necessity. Sometimes we very quickly learn that our narrator is crazy (think about Poe’s short story The Tell Tale Heart) while other times our understanding is much more gradual and subtle. 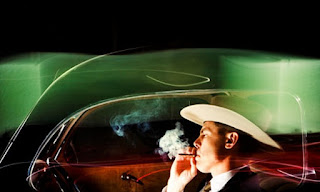 The first time I read The Killer Inside Me by Jim Thompson I had been told nothing of the book. Being used to 1940s and 50s hardboiled mysteries, it wasn’t all that surprising having a detective (or in this case a sheriff) who gets a bit rough with morally bereft men and even women. But when Sheriff Lou Ford’s violence starts to become more and more masochistic, it becomes obvious that he is something quite different than a hyper-masculine tough guy, that he is a complete and utter psychopath. Reading Jim Thompson set me in a different direction in my own writing, and I’ve stayed on that path of psychosis and depravation ever since. My own novels feature plenty of these protagonists trying, unsuccessfully, to rationalize their way out of damnation, but I am sure that they are destined to burn in literary hell and will certainly join the characters of the following psycho-noir novels, some of the best ever written: 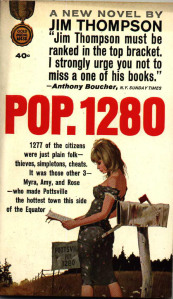 Pop. 1280 by Jim Thompson. Thompson is, of course, the master of the psycho-noir, and you can’t go wrong with The Killer Inside Me or Savage Night, but for my money his best novel was Pop. 1280. As in The Killer Inside Me, this novel features a small-town sheriff who has tasked himself with cleaning up the town’s corruption. But while Lou Ford lets the reader in on the joke (he’s pretending to be dim-witted, while he is, in fact, hyper-intelligent), in Pop. 1280, Nick Corey plays it straight, acting stupid for both the other characters and the readers. It’s only near the end of the novel when we realize just how brilliant and demented he actually is. 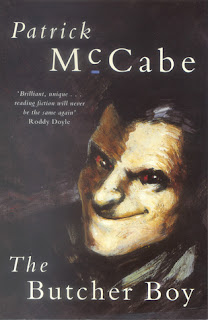 The Butcher Boy by Patrick McCabe. Told from the point-of-view of a schoolboy named Francie Brady, The Butcher Boy is one of the most outrageous and sad books that I’ve read. His own home life in shatters, Francie becomes obsessed with his neighbors, the Nugents, who seem to have the ideal life. The obsession becomes more and more twisted, leading to a terrifying climax. 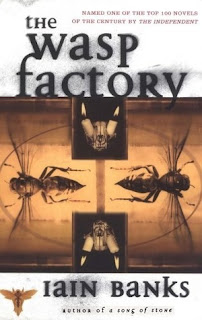 The Wasp Factory by Iain Banks. The story of a boy living on a remote island who spends his days killing small animals, building dams, and waiting for his brother who has escaped from a mental institution. Need I say more? 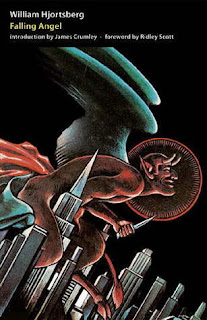 Fallen Angel by William Hjortsberg. This is the novel that the movie Angel Heart was adapted from. Written like a traditional hardboiled P.I novel, Hjortsberg is a master of the slow reveal. And what a reveal it is! 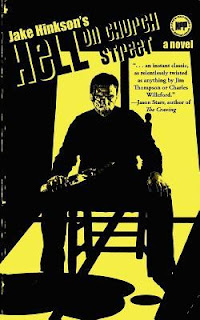 Hell on Church Street by Jake Hinkson. Set in the land of social conservatism and God-fearing men and women, Hell on Church Street tells the story of Geoffrey Webb, a loser and a fraud who somehow gets a job as a youth minister. When the local sheriff discovers Webb is having a sexual relationship with one of his underage parishioners, Webb is forced to protect his position and life through arson and murder. Think Lolita meets Elmer Gantry.

So there you have it. The world of psycho-noir. Now go ahead and return to watching the coverage of the presidential primaries. 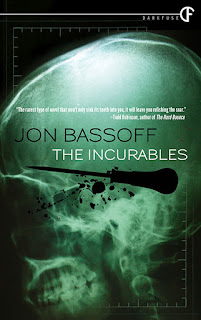 Jon Bassoff is the founder and former publisher of New Pulp Press and the author of Corrosion, The Disassembled Man and Factory Town. His latest, The Incurables is now available from DarkFuse. Keep up with Jon at his website or follow him on Twitter.
Posted by jedidiah ayres at 1:50 PM