All That Glitters in April 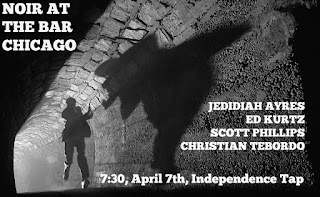 Oh craps! It's almost April and it's going to be a busy month for me. First off I've got two N@B events I'm anticipating like something you might anticipate with sweatiness. April 7 I will be back in Chicagoland with host Jake Hinkson - he of the recent Prix Mystere De La Critique for L'enfer de Church Street (plus the soon to be released Franco translation L'Homme posthume - and guests Ed Kurtz (whose upcoming The Rib From Which I Remake the World is in contention for my favorite title of 2016), Scott Phillips (whose recent non-fiction piece on Charlie Birger was published in the Riverfront Times and features cover art by Tim Lane - copies of which I will be giving away at the event) and Christian TeBordo (author of Toughlahoma, We Go Liquid and more). But shit, who else may just be hanging around? I hope to see folks like John L. Sheppard, Kent Gowran, Kevin Lynn Helmick, Robb Olson, Livius Nedin, Julian Grant, John Weagley, maybe even nearishby folks like Tim Hennessy, Frank Wheeler, Paul von Stoetzel and recent Chicago deserter Dan O'Shea. And you, of course I want to see you there too.

How's that saying go hope in one hand and shit in the other? 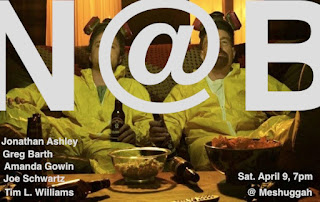 Then on April 9 it's N@B in St. Louis with a lineup of Kentucky authors Jonathan Ashley (whose Out of Mercy is bloody, perverse western I dug), Greg Barth (whose hematoma hemorrhaging Selena will have her own trilogy by show time) and Tim L. Williams (whose collection Skull Fragments will put you off humanity for a good bit - hey, we're overcrowding anyway, right?) will join Ohio import Amanda Gowin (whose Radium Girls will give you a combination of feels you'd never guess you wanted jumbled up) and local rap-sheet regular Joe Schwartz of the extra-ill-will-implicit fictions N@B was created for (check out Joe's Black T-Shirt for some short stories the St. Louis tourism board wants deleted). 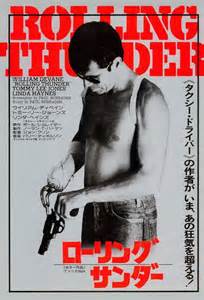 That same night in St. Louis if you're not finished with the twisted tales and sick thrills you could try, but you wouldn't find a better/worse option than Late Nite Grindhouse midnight screening of John Flynn's masterpiece Rolling Thunder at the Moolah Theater. Have you never seen this shit? Rectify that. Now. The script by Paul Schrader has it all: torture, mutilation, damaged , suicidal missions, revenge, whore-house shootouts, William Devane with a fucking hook for a hand... Tommy Lee Jones just stone-cold TLJ'ing like a motherfucker.

Tell you what, Rolling Thunder perfectly captures so many aesthetics that I look for in crime fiction and films I'd looked into using it as the kick-off for a little project I's happy to announce... 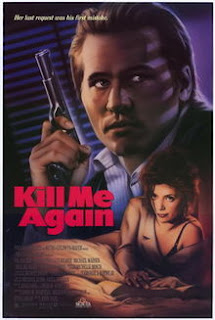 All crime all the time - I'm gonna show some of my favorite movies at the Maplewood Library (7550 Lohmeyer, 63143) starting with John Dahl's Kill Me Again on April 13 at 7pm. The library has been super great about letting me show some killer flicks and talk about them and why you should love them too.

If you're not yet sick of my blathering, you will be soon. Here is the lineup for April/June

I hope to keep this going and I'd love to see you there!
Posted by jedidiah ayres at 2:27 PM

Labels: Hardboiled Wonderland Film Series, NoirBar, Patting myself on the back