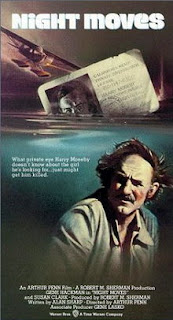 Watched Arthur Penn's Night Moves again the other, uh, night. It'd been a while since I'd first enjoyed it and wanted another go. I mentioned my intent to revisit it on social media and N@B-godfather, Peter Rozovsky (good ol' Fuck Peter Rozovsky himself) spake up to say it was not a film he enjoyed. He referenced a piece on his Detectives Beyond Borders blog about his experience watching it and it appears his chief complaint is one of the meta-text or the heavy-handedness of the film's nods (heavy-headedness?) to its predecessors and lineage - particularly when Gene Hackman's detective is interviewed by a potential new client and she asks him, on behalf of the audience, if his model of detective is anything like (Dashiell Hammett's) Sam Spade. 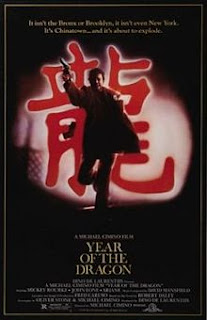 Of course the post also had the film's supporters speaking up - notably Scott Adlerberg who knows a thing or two about crime flicks and Andrew Nette who covered Night Moves on his Pulp Curry blog (and in honor of the late Michael Cimino had this recent re-visit of Year of the Dragon - which Nette points out owes a conscious debt to Roman Polanski's Chinatown).

But being a fan both of crime fiction and film of the mid and late twentieth century I've found particularly the private detective subgenre to be rife with metatextual nods to influences and ancestry, especially at times of cultural shifts and pivots. Before Night Moves, Penn's Bonnie & Clyde had given the gangster picture the re-contexualization that New-Hollywood was giving to all popular genres (Penn's Little Big Man and Sam Peckinpah's The Wild Bunch were doing it to the western, Milos Foreman's Hair was almost a decade later, but the stage version along with Andrew Lloyd Webber's Jesus Christ Superstar were hardly The Greatest Generation's musicals), and Night Moves' nods to fare like The Maltese Falcon may be on the nose, but I'd say no more so than another flick I dig - Jack Smight's 1966 Harper (an adaptation of Ross MacDonald's The Moving Target) which places itself, rather audaciously, in the lineage of Raymond Chandler's/John Huston's The Big Sleep by going so far as to recreate the opening scene for a new time with the same actress (Lauren Bacall). 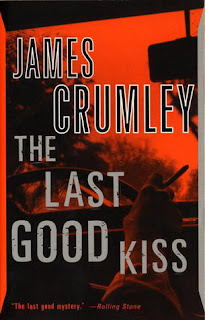 Or hell, one of my personal favorite detective novels - James Crumley's The Last Good Kiss is all loving-homage as well as re-purposing of the plot of Chandler's The Long Goodbye. Or what about the relationship between Vicki Hendricks' Miami Purity and James M. Cain's The Postman Always Rings Twice - is foreknowledge of the former necessary for appreciating the offspring?

No, but man, they make sweet music together. 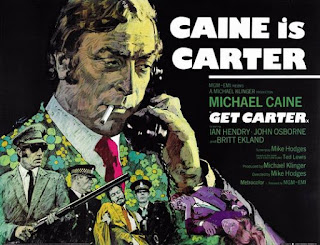 In fact I'd say that Mike Hodges' 1971 Get Carter (a film I know Rozovsky digs - and hey, both Detectives Beyond Borders and Pulp Curry have some swell pieces on Jack's Return Home author Ted Lewis and his final novel - the face-melting GBH - go check em out) begins the schtick that Hodges and Michael Caine continued in their next (and very-meta) film Pulp (1972) in which Caine plays a pulp novelist drawn into actual events that mirror the plots of some of his hacky creations. That credit sequence of Carter on the train reading Farewell My Lovely winks pretty hard without becoming parody and the film itself is more or less a detective picture in which the detective is anything but noble and all the elements of a typical revenge thriller are left out a beat too long - to spoil, to twist, to sour, to hurt. 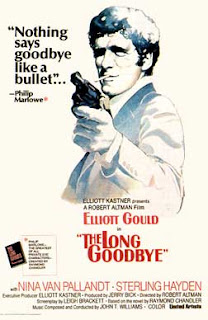 I also re-watched Get Carter this week and was struck this time by how much it reminded me of Robert Altman's same period exercise in repurposing the detective genre, the ever-divisive The Long Goodbye - particularly sequences like the introduction of Cyril and Glenda (John Osborne and Geraldine Moffat) - the way the separate conversations overlap without one receiving preferential treatment in the sound mix creating an uneasy tension and a dual-track suspense sequence with multiple layers of relational dynamics. 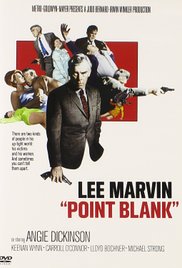 Just under twenty years ago New Hollywood was getting its own re-contexualization in the age of remakes. John Boorman's 1967 adaptation of Richard Stark's (Donald Westlake's) The Hunter, Point Blank became Brian Helgeland's Mel Gibson pic Payback - which itself was re-released years later (in the far-superior form Payback: Straight Up) and Stephen Kay's Sylvester Stallone vehicle (with a cameo from Caine) Get Carter. 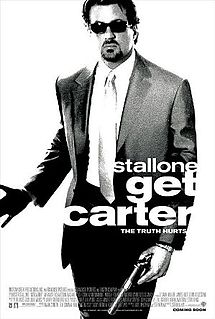 Needless to say Stallone's Carter has some code to him, some moral center the audience can sit inside comfortably and thus enjoy the good old-fashioned ass-kicking action.

What that says about the film makers' artistic/commercial intent or the audience's perceived appetite vs. the actual reception/rejection it received is worth thinking on. Similarly, you could almost compare Payback and Payback: Straight Up's film makers'/audience's intent and reception with equal intrigue. 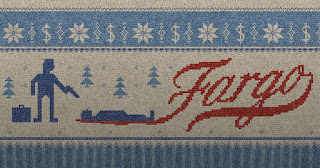 What is the "new" position? What tropes are they playing with? Are they subverting anything? Are they restoring the old or mere grossly cynical exercises in capitalism? In this age of re-appropriation and re-making, re-directing - the age of both J.J. Abrams and Noah Hawley - I'd argue that the mash-up, the remake, repurposing of original intellectual properties may be the representative art-form of the age, and as such makes up some of the best and worst creative works the period will be remembered for and juxtaposed against in the future.

So yeah, it's nothing new. It's more or less its own trope by now. 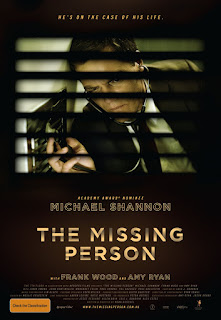 High profile projects like Paul Thomas Anderson's Inherent Vice David Fincher/Gillian Flynn's Gone Girl, or Quentin Tarantino's, Shane Black's and the Coen Brothers' entire oeuvres rely heavily on it and smaller films like Jeremy Saulnier's Blue Ruin, Aaron Katz's Cold Weather and Noah Buschel's The Missing Person have recently used our familiarity and basic literacy with the genre's tropes and understanding of the way it ought to go to pull off some nice tricks - subverting expectations without (entirely) parodying their origin - often directly stating them. 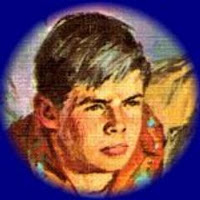 Of course how it succeeds is entirely personal. Poor old Peter Rozovsky is hyper-literate in the genre and one man's subtle innuendo, in-joke or subliminal suggestion is another man's bullhorn announcement. I get that. You wanna good laugh about it all? @CrimeFicTrope on Twitter is always good for a chuckle.
Posted by jedidiah ayres at 5:52 AM

Thanks again for bringing us these. The Last Good Kiss takes it title from a terrific poet Richard Hugo.