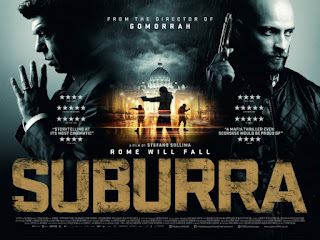 Spent some time disappeared down a rabbit hole of Italian crime films of the seventies recently. Plenty of folks with more insight and knowledge than me (some of whom I hope will chime in here soon), but I just wanted to drop a few thoughts. Watch your step. 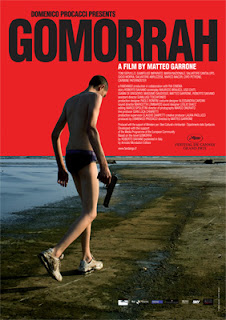 After being so blown away by Stefano Sollima's Suburra last year (have you seriously not yet watched that shit? Come on) - finding it reminiscent, in its bleak portrait of all-encompassing corruption, of Matteo Garrone's Gomorah or Paolo Sorrentino's Il Divo, and after being similarly shocked to attention by Carlotto Massimo's The Goodbye Kiss and At the End of a Dull Day (thanks btw to Thomas Wickersham for the introduction) I wanted more of this Italian thing. 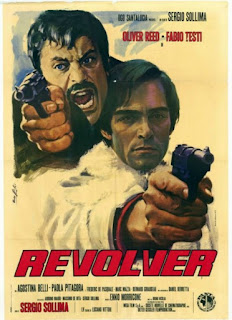 I started with Revolver (aka Blood in the Streets 1973) directed by Sergio Sollima and starring Oliver Reed as a prison warden whose wife is kidnapped and Fabio Testi as the prisoner whose release is demanded by the kidnappers in exchange for his wife. Reed capitulates by arranging for Testi's escape, but turns the tables by kidnapping the prisoner himself. Of course his assumption about the reason the kidnappers want Testi released is way off. Foes become bros and much blood is let in the streets. This one has a terrific climax and is bolstered by an incredible score from Ennio Morricone. 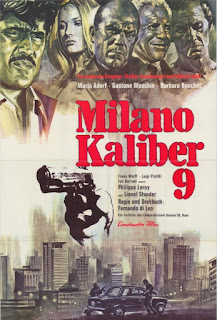 Followed it up with Fernando Di Leo's Caliber 9 (1972) featuring the fugly mug of Gastone Moschin as Ugo Piazza released to the streets after years in prison where his former friends and eternal enemies seem to agree he conveniently had himself sent after the money from a heist went missing. Ugo knows it's hopeless to convince anyone that he didn't steal the stolen loot, and stoically takes beatings, shakedowns and threats from cops, crooks and the fates until... he doesn't. This is a perfect example of the kind of street-level hardboiled crime film I wish were made more often. Reminded me of early standalone Ken Bruen stuffs - and that's about as high a recommendation as I'll ever give. 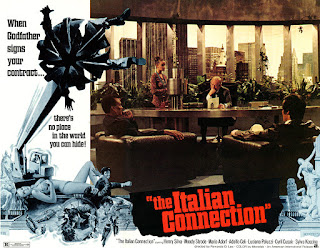 Di Leo must have ingested some super potent vitamins because he also put out The Italian Connection in the year of Our Lord 1972 in which Mario Adorf, a small time pimp who, finds himself the target of a hit put out by the top boss with no idea why. Doesn't matter he can't figure out why he's wanted dead - if the boss wants you gone, everybody wants you gone. And not only is every friend now a probable enemy, the boss has imported two cold blooded professionals from New York, Henry Silva and Woody Strode, to do the job. This one is more an action flick than Caliber 9, but it'sruthless enough with who gets it and when (as well as having an all-in performance from Adorf) to make for highly watchable entertainment and uncommonly emotionally engaging action flick fare. 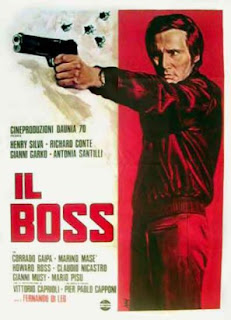 Stayed with Di Leo for 1973's Il Boss in which Henry Silva plays a hit man/enforcer working his way up the ladder of power on one side of a mob war. It begins with a spectacular hit sequence and never really gets better, but sustains a tone violence and cold-bloodedness I'm prone to appreciate. 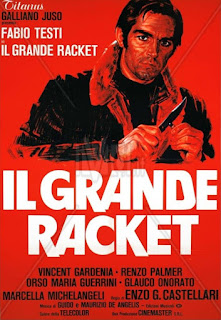 Enzo G. Castellari's The Big Racket (1976) stars Fabio Testi as a Dirty Harry-style cop prone to playing loose with legalities when putting pain to the bad guys. No bones are made about the badness of the baddies or the righteous motives of Testi, but yeah, he really shouldn't be allowed to carry a badge anymore. Once he's kicked off the force he mounts a vigilante campaign against the gangster-ring ruining lives with impunity. He recruits a Dirty Dozen-esque team of revenge-seeking-victims to mount an all out war against the criminals and - lots of people die in satisfying ways. 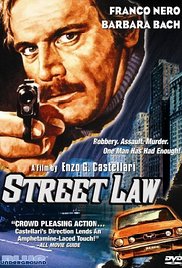 By the time I got to 1974's Street Law, also directed by Castellari, starring Franco Nero as an everyman whose life is turned upside down by the intrusion of violence, I'll admit I was a little dulled to the style and tone to of the violence specific to these 1970s Italian films, and some of the charm of the poor sound dubbing present in all of these was wearing thin. Nero too, giving it his all, but only landing the moment half the time contributed to my placing it significantly below the earlier films in this little detour I took. Given a year or even a few months between viewings, I'd probably have enjoyed this one quite a bit more, but it felt the slightest.

A palette cleanser of sorts was Bernardo Bertolucci's The Conformist (1970) with its period setting (1930s), art deco designs, classical compositions and slow pacing. Based on the novel by Alberto Moravia about a man set on proving himself to be a good fascist by assassinating a former teacher of his. Enjoyed, but not rocked by - I'll sooner return to something like Michelaneolo Antonioni's The Passenger when I want a slow burn, but I'm pretty sure this was not a one and done viewing for me.

With my palette cleansed I'll get around to watching Andrea Bianchi's Cry of a Prostitute (1974) soon.
Posted by jedidiah ayres at 9:55 AM

speaking of italians, have gotten to MACHINE GUN MCCAIN directed by Giuliano Montaldo yet?

Yes! thanks for the rec. Love that cast.