A writer is always collecting experiences and sponging characters from everyday interactions, but there a handful of jobs a writer can hold that are indispensable gold mines of story elements that will inform and enrich their art. Top of the list for crime writers: cop, social worker, drug dealer, skip tracer - and probably top of the heap - cab driver.

Back in 2010 I flipped out over Nobody's Angel, Hard Case Crime's resurrection of Clark's first Eddie Miles novel. It went on to be one of my favorites of the year and the next to last HCC book in the mass market size (HCC returned nearly two years later in their current larger paperback and even hardcover format). I'm happy to report that Back Door To L.A. (only the second Miles book and more than twenty years since Nobody's Angel's first publication) is another strong entry in the series.

Here's the piece I wrote about Nobody's Angel back in 2010... everything still applies and to Back Door to L.A. too. Get some. 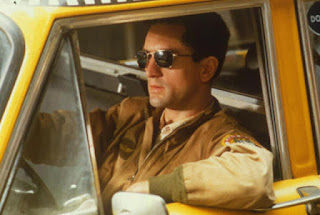 Jack Clark, a Chicago taxi driver among other things, (like journalist and singer-songwriter), self-published Nobody's Angel in 1996 and sold it exclusively out of his cab, (hey John Grisham did the same thing for a while). Now it’s been reprinted by Hard Case Crime and made available outside the cab, in actual bookstores. Thank god. It rocks. 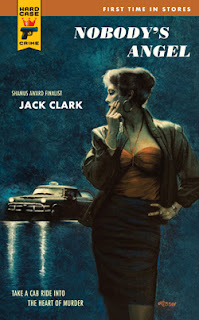 My first fifteen stabs at writing about this book were awful. I kept waxing poetic on the nighttime streets, the human detritus and the noble hack patrolling his beat. It got bad. I mean really bad. You have no idea. But such was the power of this book—I bet it launches a hundred purple reviews—so full of grand, large themes and cinematic setting and heroic melancholy that it cries out to be treated thus. But Jack ain't having none of it. He keeps the whole thing on a reasonable scale and that’s one reason I loved this book.

His protagonist, Eddie Miles, himself a veteran Chicago cabbie is as hard-bitten and weathered, as flawed and vulnerable and as philosophic and smart-alecky as all the great first person protagonists before him, but he walks the razor’s edge of hardboiled cliché and cloying sentimentality with deft, sure-footed steps and pulls you through all that clean of any sticky, pulpy residue. That’s another reason I loved this book.

Somebody is killing taxi drivers. Somebody is killing street walkers. Eddie Miles does something about it. I read that premise and rolled my eyes—honestly, I don’t know how he pulled it off, ‘cause it’s a neat, clean read, never bogged down by clunky plot mechanics or choked by forced emotions. Clark’s simple, honest prose style immerses you at once in the minutia of hack life and Eddie’s entirely reasonable goals. And though, I am perfectly willing to do so in the right circumstances, I was never even close to straining my plausibility muscles. That is one really big reason I loved this book.

Far, I’m sure from autobiographical, it does clearly draw upon Clark’s own experiences and characters that undoubtedly have walked and breathed in Chicago at one time or another. The anecdotal structure pulls you along at just the right pace and the economics of his story telling are commendable. There’s a world of intriguing and memorable detail expertly packed into two-hundred pages and just the right amount of heartache. The book’s close features one of the best final lines of any book I’ve ever read. Please don’t pick it up and read that last page first, it’s so worth getting there naturally.

Didn't singer-songwriter Tom Russell drive a cab too? Those guys can write.
Posted by jedidiah ayres at 10:14 AM