Man Out of Prison: The Devil's Redhead 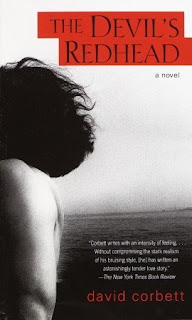 Counting down to the Netflix release of Evan Katz's adaptation of Dave Zeltserman's Small Crimes I'm looking at some of my favorite in the man-out-of-prison subgenre. Today it's The Devil's Redhead by David Corbett.

Corbett's debut novel is the story of Dan, a pot smuggler who went down hard after being betrayed by a business associate and, who emerges from prison after ten years with a single goal - to reconnect with Shel, the titular woman he loves.

Shel was a former partner who did her own (much shorter) stretch and who has moved on with her own life since and become involved with another man involved in controlled substance circles - this time the darker, more violent desert methamphetamine industry.

Dan is done with prison but dead set on breaking parole to find Shel whom, as a known felon, he is legally forbidden to have contact with, and when he does find her - tied now to another man, a very deeply in the shit man - he's going to have a few hard choices to make. Time has changed the game, and changed the players, but only intensified the pull to Shel. Dan went in a non-violent business man, but has emerged with a new outlook and new capabilities.

Covering some similar territory as Don Winslow's Savages - non-violent weed-wranglers getting into cutthroat business practices in the ever increasing money and therefore stakes of the drug trade in the American southwest - Corbett's tough prose stretched over a tender heart for a helluva debut with blood and dust enough for your hardcore crime kicks while softening up your vulnerable bits to drive a wicked blade into.
Posted by jedidiah ayres at 5:13 AM

Thanks, Jedidiah. Nice to know the old girl still can catch a man's eye.