Man Out of Prison: Dom Hemingway 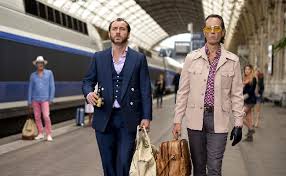 Counting down to the Netflix release of Evan Katz's adaptation of Dave Zeltserman's Small Crimes I'm looking at some of my favorite in the man-out-of-prison subgenre. Today it's Richard Shepard's Dom Hemingway.

Jude Law plays the titular self-destructive safecracker just out of prison after serving twelve years in prison he finds himself loose again on the streets of London and intent on making up for lost time. This means indulging formidable appetites for alcohol and sex and drugs. Also for getting what he's got coming to him. Seems Dom kept his mouth shut while inside when he could've made it easier on himself by saying the name of Demián Bichir the crime boss he worked for and now that he's out he expects to be duly compensated.

After all he is Dom Hemingway.

Which apparently is a big deal.

Sure, it's kind of a badass moniker - the type you could maybe name a book or movie after - but who the fuck does he think he is?

He thinks he's a legend, but he's not. Not really.  Or, not for the things he thinks he is for anyway.

He thinks he's immortal, but he's not. He just hasn't died yet.

He thinks his cock is something special and... it might be. 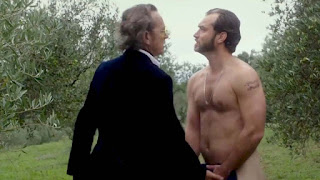 I mean, it's got its own monologue (as subject, not speaker) and it's what Dom puts up as collateral when he auditions for a criminal who (for reasons I'll let you discover for yourself) does not like him... as in give me a safe to crack and if I can't crack it in ten minutes, you can chop off my cock. It is a bet happily agreed upon.

Does he lose his member or is he really as amazing as he spends the first 90% of the movie telling us he is? Does he love himself as much as he appears to? Does anyone? Find out. 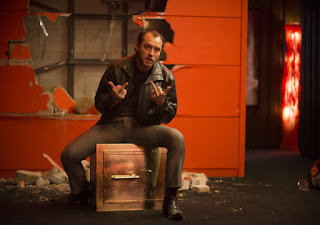 Not a thriller. Not a straight-up comedy. And not, thank God, the sentimental heart-warmer some of the trailers out there seem to suggest it could be. Dom Hemingway confirms Richard Shepard's rightful place in the same league as the McDonaghs for gleefully foul-mouthed crime-inflected fare that sometimes wants to be about something (I said same league - don't go quoting me as saying they're equals, I mean, shit, the New England Patriots and the St. Louis Rams used to be in the same league, but no-fucking-shit, after The Matador, The Hunting Party and Dom Fucking Hemingway he's more than just playing the same sport - Richard, you fuckin rock in this mode).

Plus, holy shit, how great are the performances from Jude Law and Richard E. Grant? They're fucking great as how.

My cock.
Posted by jedidiah ayres at 6:53 AM