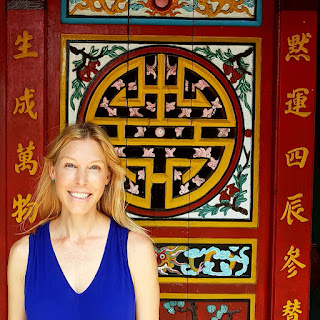 Today Canadian crime writer Elka Ray, author of Saigon Dark, Hanoi Jane and What You Don't Know, brings us a story of street crime in Vietnam. Take a quick tour of her neighborhood and then be sure to check out her website and follow her on Twitter at @ElkaRay.

I'm sitting in the back of a battered taxi in Ho Chi Minh City's nascent backpacker ghetto in the mid '90s. The street caters to late night partiers and is just starting to wake up - an army of pretty young female street sweepers scraping their brooms through the gutters, guys dressed in boxer shorts dragging knee-high tables and stools onto the sidewalks. 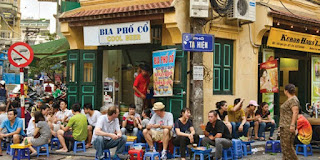 It's about six a.m. but already hot. My taxi doesn't have aircon. All the windows are rolled right down. I've landed an assignment to write about the new luxury resorts popping up along Vietnam's coast. I'm headed to the beach and want to get going. I'm waiting for someone - I can't recall who - and they're late. I'm not a morning person and am pissed. There's a long drive ahead. Highway 1 is a goat track. I call them on my new mobile phone - a novelty in Vietnam. Up until recently I had a pager. I'm listening to an error message when a kid reaches through the window and grabs my phone. I keep hold of it with one hand and grip his wrist with the other. We both pull.

He's in his late teens or early twenties, not much younger than me. He's skinny but strong, with not an ounce of fat on him. We stare at each other, our faces about two feet apart. I'm a young blonde in a linen dress, trying to look older and more professional than I am. He's got dusty black hair and the flat black eyes of a junkie. Eyes without hope. I've seen those eyes on accident victims going into shock and in photos of people captured by the Khmer Rouge, just before they were beaten to death. Ghost eyes.

His mouth twists with hatred. So does mine. I know I should let go. It's just a phone. But this little shit is trying to rip me off at six a.m., before I've had coffee. 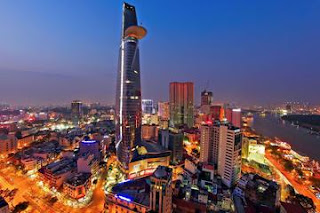 In terms of violent crime, Vietnam's pretty safe. It's got the world's strictest gun laws: any private citizen caught with a gun goes to jail. Sure, there's petty theft - B&Es, purse snatching, hookers shaking down guys too dumb or wasted to know better. Domestics. Human trafficking. Once in a while a gold store gets done - an entire family's throats slit, or a drunk goes beserk in a karaoke bar.

Those stories don't make the English-language papers. But lethal crime against foreigners? I've lived here 22 years and can only recall one deadly case: a young Dutch woman stabbed by a junkie in a busy Saigon market in 1997. Just shy of six months later, her killer faced a firing squad. Drownings, home and workplace fuckups and traffic accidents are another story. The WHO estimates 14,000 people die on Vietnam's roads every year. Per capita, it's among the 25 most dangerous countries in which to drive. Most people ride motorbikes and even those driving cars, buses or trucks still act like they're on their first BMX. My personal tally of traffic loss is one friend (major brain damage), one dead colleague, and two friends' dead kids. Nobody recovers from the kids.

Does any of this go through my head as I'm arm-wrestling Ghost-eyes for my shitty Motorola? Not really. Well, a little. I know he's got nothing to lose. He could have a knife. Or a syringe. I should let go.

His wrist is right in front of my face. I look at it, then back at him. We both realize at the exact same second: I'm going to bite him. I open my mouth. Those blank eyes click like a doll's. He lets go and darts across the street, dodging cyclos and bikes before ducking into an alley. I push the car door open and jump out, yelling. I'm mad enough to go after him but there's no point. I've got my phone. Plus it's a warren back there - a maze of meter-wide alleys like something from the Middle Ages.

Would I really have bitten him?

Looking back, it seems crazy. His wrist was filthy. I haven't thought about that kid in years. What happened to him? Nothing good, I'll bet.

Once the light in your eyes dies, I can't see it coming back. Over the years, I've met plenty of kids with hard luck. Street kids. Hustlers. Abused and abusive. A few made it out - they retained some hope and innocence. They met some kindness. 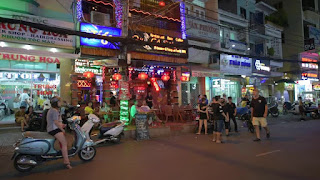 Some years back I lived near a supermarket. The security guards would post photos of shoplifters up near the till. All the photos looked alike: men and women with the same stunned, scared and guilty look disguised as defiance. The worst photo I saw was of a woman and two little boys, maybe seven and nine years old. The terror and humiliation in those kids' eyes. I wanted to rip the photo down. I wanted to find those kids, to tell them it wasn't their fault. And then what? Instead, I just looked away. If you want to see the world in black and white don't live in a poor country. Poverty and dirt turn everything grey. 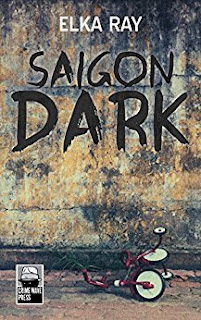 Elka Ray is a Canadian author, editor and illustrator who lives in Vietnam. She writes for children and adults. Elka is the author of one light romantic mystery - Hanoi Jane; a suspense novel - Saigon Dark; and a collection of short crime stories - What You Don't Know: Tales of Obsession, Mystery & Murder in Southeast Asia. When she's not writing, reading or drawing, Elka is in the ocean.
Posted by jedidiah ayres at 6:53 AM