Reads of the Last Week 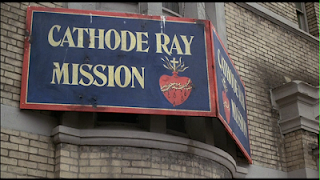 In the last eight days I watched a measly three movies with my family (on a car ride) and zero film or TV by myself during our trip to Colorado. Believe it or not I didn't even get the video sweats. Because I had books. These books. 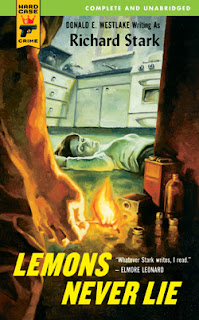 Lemons Never Lie - Richard Stark - This is the first non-Parker (Donald Westlake's pseudonym) Stark book I've read and it won't be the last. It's a Grofield book and apparently I picked the fourth and final Grofield book to begin, but clearly it didn't matter for enjoyment purposes. Grofield is a sometime collaborator of Parker's - another professional thief - who has a strict set of rules he lives his dual lives by. He steals to finance his artistic ambitions as a stage actor with his own company - he's so artistically pure he won't demean his craft by doing commercials or anything involving a camera - he and his wife live in their theater, sleeping on sets, cooking on a hotplate in the kitchen set. He calculates exactly how far every potential score will carry his non-money making passion (people in Indiana don't go to many plays). He's not as ruthless as Parker, but he's pretty cold when weighing the value of lives against his own interests. Oky doke - I'll read the others. 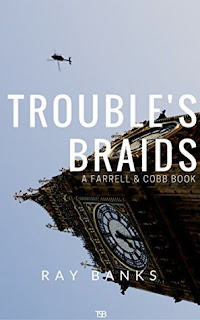 Trouble's Braids - Ray Banks - Pulled my Kindle out for this one. I like to read paper books for the most part, but I do love to travel with my Kindle because I've got a couple hundred books to choose from in my pocket when I finish the paperback I brought. And  damn, if you want to read Banks - and you fucking should - you've got to have a Kindle because it's the only way this one's available. It's a damn shame too because this is easily my favorite Banks title since the first Farrell & Cobb novel Wolf Tickets (which I have in paperback because it originally appeared in print serialized in Needle magazine). I read and dug the amnesiac killer kindle serial Matador and the rather dour and depressing Angels of the North, but Trouble's Braids is everything I like best about Banks all the way through - the (alternating by chapter first-person narration between Farrell and Cobbs) voices are sharp and distinct, the humor is rooted in character and doesn't undercut the impact of the violence which is brutal, un-glamorous and plentiful and the whole thing is fun. I checked on Amazon and this book has disappeared - you should fucking read it - you should get obnoxious telling people to read Ray Banks - this is your chance to be on the right side of history - Ray Banks is the shit. 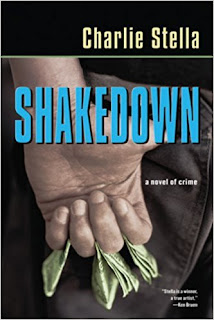 Shakedown - Charlie Stella - Rolling right along with my Kindle selections and dove into one-a Stella's gangland tales about an ex-mob accountant getting squeezed by the old crew after one of their own flips for the feds. As former associates are being coldly dispatched and others are coming around to extort money they're sure he must've skimmed when he worked for them he puts into action a plan to get out for good... aaaaaand I dropped my damned electronic reader and it broke halfway through this one. Good thing I have the paperback waiting for me at home. I'll finish it - cuz I love me some Stella. 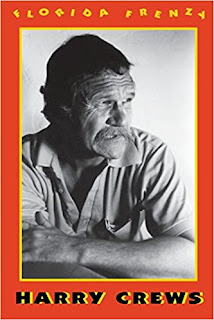 Florida Frenzy - Harry Crews - After breaking the electric gizmo I found a bookstore walking distance from where I was staying and spent a desperate hour combing through for something to read. I found this collection of essays and short stories by Crews perfect for my bouts of vacation insomnia. It was admittedly refreshing to read a voice so pure and unconcerned with popular opinion from a pre-social media period - not because I'm sympathetic to every opinion or life choice made by the author but - because there are zero fucks given to my delicate sensibilities and what emerges is an unfiltered look back at a recent past sensibility and a particularly sharp eye for journalistic detail chronicling a passion for wild life and bloodsport of various stripe. Mostly true tales of car racing, cockfights, dogfights, academia, swamp living and sexual misadventure made for a super-quick read. So I had to go looking for more books. 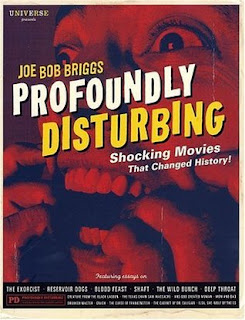 Profoundly Disturbing: Shocking Movies That Changed History! - Joe Bob Briggs - Found this one from Briggs whose turn as the slow-witted, over-polite and politically-connected slot machine manager Robert De Niro orchestrates his own downfall by firing in Martin Scorse's Casino had cracked me up all over again the week before and when I spotted this one on the shelf it called out to me. Great coverage of films in chronological order from The Cabinet of Dr. Caligari on through to David Cronenberg's Crash with sexual, political, violent and surreal content that rocked their time periods and hit or flop shaped film and societal attitudes for decades to come. The history, the productions, the reception and legacies of each picture are described with heaps of nerdy love and I couldn't get enough. I purchased it and then began to flip through idly and ended up devouring it whole-cloth in a day. Damn it, onto the next book store. 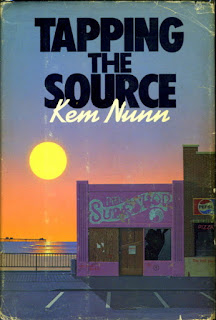 Tapping the Source - Kem Nunn - For the return trip I was excited to find a copy of Nunn's essential surf noir and I guess this is the place where I own up to never having actually read it before. I was super aware of it and have read other Nunn books as well as enjoyed his TV contributions (Deadwood, John From Cincinnati, Sons of Anarchy, Chance). I've also enjoyed Don Winslow's surf titles - California Fire & Life, The Dawn Patrol, The Gentlemen's Hour - and knew that Kathryn Bigelow's Point Break was not the only pop culture bastard this book had spawned, but I'd never actually um tapped the source. Who-ee am I glad I have now and very pleased to be afforded the opportunity to do it in a single sitting. It's a thing of beauty and takes it to the limit - reminding me of other classic crime novels from the post-Viet Nam era from Newton Thornburg, James Crumley and Kent Anderson and while several scenes, scenarios and themes from the book would go on to appear in slightly altered form in Point Break, I was relieved to find enough differences in plot and texture to continue enjoying the film without thinking of it as a direct rip off. Whew. 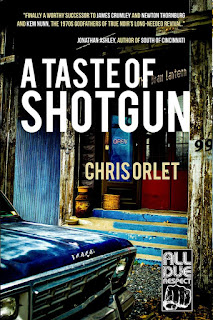 A Taste of Shotgun - Chris Orlet - Orlet's first novel Among the Pines was published by New Pulp Press during the ignominious post-Bassoff period (as were a handful of otherwise worthy titles), but his second novel appears to have found a proper home at Down & Out who are mopping up the orphans of many small crime presses with gusto. Classic noir story of a small-time scofflaw with debts no honest man can pay. He's juggling a failing family business, a barely hanging on to parole brother, an extra marital situation and a pair of psychotics blackmailing him over a killing from way back. This one is set right across the river from my St. Louis home in Belleville, IL. and had the added pleasure of recognizable settings and regional issues. It's not out yet - coming soon from Down & Out - but after the car ride was too dark for print I read this thing off my computer screen. Did I mention the kindle is caput? 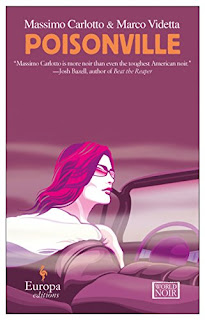 Arrived home to my paperback of Shakedown armed also with my other Colorado purchase Russell Banks' Trailerpark as well as some special orders that didn't arrive in time to travel with me - Tightrope on Fire by Chris D. and Poisonville by Massimo Carlotto & Marco Videtta so I'm good for a little while.
Posted by jedidiah ayres at 11:37 AM