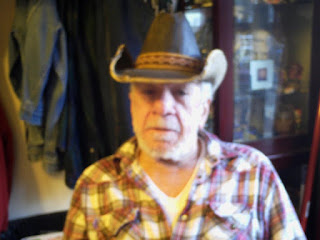 Jim wore a cowboy hat always. And boots. Except during Ninjitsu training. As an octogenarian. I never saw him train, but I heard about it. Whenever we sat together in the parking lot waiting to pick up children from school (my kids, his grandson). Or at the park. Or at his home where he'd decorated the hell out of Halloween season and thrown a party for his grandson's birthday.

The last time I saw him was at one of those parties. 20 teenagers running around the back yard in costumes shooting Nerf guns at each other, hopped up on sugar and nitrates. I loved the parties and it was clear the kids did too, but it wore me out just looking at the scene. Not Jim though. He thrived on it. He had energy to spare. He damn near broke my fingers shaking my hand. He wanted me to know there was coffee in the house. He always made sure to make coffee if I was coming over. He knew I liked it. He liked the way my wife made coffee when he visited our home. "She makes it strong." 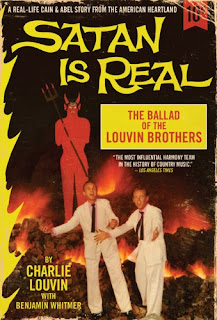 Jim told me stories with a little prompting. He ran away from home at 14. Never saw his father again. Joined the Marines. Played in a country western band with his brothers on a honky-tonk circuit. Tended bar at a rough joint in St. Louis. Got in fist fights. Whiskey bottle fights. Gun fights. The stories he told me brought to mind Charlie Louvin's tales and I got him a copy of Satan is Real by Charlie (and Benjamin Whitmer). Jim loved it. He bought copies for his surviving brothers. He took care of his siblings during their declining years, often driving all over Missouri and Illinois to work on their homes or take them to medical appointments when they were ill or unable to themselves.

I knew Jim throughout his seventies as a kind man with a sweet disposition toward me and my family. But I know not everyone who knew him had the same experience.

Jim told me of estranged family members from generations before and after him. He wanted to talk about hard things. He'd had meanness demonstrated to him young and had responded in kind frequently throughout his life. He figured he'd changed some. He didn't know about grace. He asked me questions about Jesus. He believed in God most days. He had opinions.

We didn't see eye to eye on many things. I hated his politics. He cut me some slack, but figured people who thought like me were a big problem.

I didn't argue much. I listened. It was easy to. Jim had so much story to share. Full of humor and heart and violence. Beautiful and terrifying in the unvarnished presentation. I wish I'd taken more extensive notes about his life. I told him I'd like to use some of his biographical details in my fiction and he was thrilled. He read my book and said I had the stuff. Nothing gives me more confidence in my merits.

Tuesday Jim died.
For the last 80-some years Jim lived.
Posted by jedidiah ayres at 11:55 AM