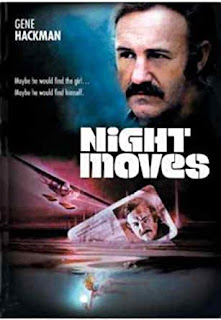 There’s not a lot of romance in Arthur Penn’s existentially bleak 1975 neo-noir, Nightmoves.

As much to take his mind of his suspicions that his wife, Ellen (Susan Clark), is having an affair (she is), as the need to turn a dollar, Harry takes the job of finding the 16-year old tearaway daughter, Delly (a very young Melanie Griffiths in what was her first major screen role), of a washed up Hollywood star (Janet Ward).

Like any good PI movie, the apparent simplicity of Harry’s case is in inverse proportion to what is actually going on, which is eventually revealed to involve a racket smuggling precious Mexican antiquities into the United States. 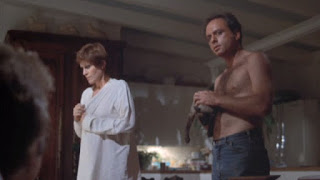 There’s sex, a bit of lust (not all of it legal), a reasonable amount of violence, and a lot of betrayal. In fact, thinking about it, betrayal is probably the film’s main theme: Harry being set up at the beginning of the film by one of his best friends (although we don’t know this then); Ellen’s affair with an art deal called Marty Heller (a small but wonderful turn by veteran US character actor, Harris Yulin); the way that Delly is betrayed by virtually every adult she meets.

And, if you want to get really existential, one could add the betrayal of the 1960s, as the promise of the counter culture and widespread social transformation gave way in the 1970s to the intense disillusionment and ennui resulting from the assassinations of various progressive political figures, Watergate, and the carnage in Vietnam. And as the microcosm of this larger social shift, the way Harry was betrayed himself by pissing away all the potential in his early his life.

But the film has one very romantic scene. 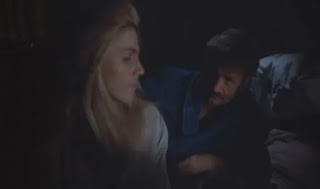 It comes after Harry has got back to Los Angeles from the Florida Keys, where he found Delly and had a one-night stand of his own with a woman named Paula (Jennifer Warren). He’s returned the runaway to her mother and is determined to quite the PI game.

Ellen stumbles in on him packing up his office. She’s always wanted him to change professions but doesn’t know what to say to him now it seems like he has finally pulled the plug. After a few attempts at conversation they kiss and go to bed. 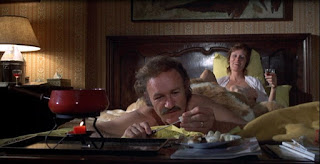 The next scene boasts what is, as far as I am aware, the only post coital fondue scene in a big screen movie (although I am sure a comprehensive trawl through European cinema from around the same period would unearth a few more examples). Harry is spearing something onto a skewer. Ellen is laying against the bed head drinking a glass of wine.

‘No, just thinking about things.’

He tells he about the time he went to track down his father, who had run off when he was young. It is obviously an important part of his identity, not least because it involved him successfully using his then nascent PI skills to locate the old man in a rooming house in Baltimore. 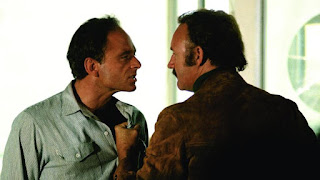 But rather than confronting his father, as has been the case with the version of the story he has always told in the past, he watched the lonely old man sit on a park bench but couldn’t bring himself to talk to him.

Ellen is surprised that he has never told her the real story, but it is clear that his honesty, probably rare for Harry, has brought them closer together, and made both of them determined to give the relationship another shot.

Whether they are successful or not we don’t know because very soon after, harry learns that Delly has been killed in a car crash and the nagging suspicions he has about the case start to come into focus and he decides he has to go back to Florida.

Andrew Nette is a writer of fiction and non-fiction, reviewer and pulp scholar. He is the author of two novels, Ghost Money, a crime story set in Cambodia in the mid-nineties, and Gunshine State, and co-editor of Hard Labour, an anthology of Australian short crime fiction, and LEE, an anthology of fiction inspired by American cinema icon, Lee Marvin. He is co-editor of Girl Gangs, Biker Boys, and Real Cool Cats: Pulp Fiction and Youth Culture, 1950 to 1980, and Sticking it to the Man: Revolution and Counterculture in Pulp and Popular Fiction, 1956 to 1980, both published by PM Press. He is working on a third volume, on radical science fiction from 1950 to 1980. He has also written a monograph about Norman Jewison’s 1975 dystopian classic, Rollerball, released by independent UK film and media studies publisher, Auteur, in 2018.
Posted by jedidiah ayres at 9:48 AM