The Ghost Who Walks 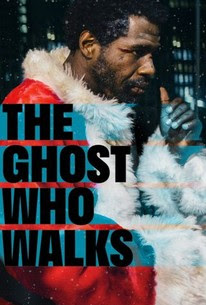 Heads up on this year's future CrimesMas favorite, Cody Stokes' The Ghost Who Walks now available on Netflix. I've been anxious for folks to get a look at this one for a while now. It stars Garland Scott as a man just released from prison with a very specific goal: reunite with his girlfriend and daughter and split town to a new life before the old one can catch up.

He's out because he cut a deal and the former colleagues he informed on are scouring the streets for him while he tries to execute his hastily thrown together plan.

Personally I'm also here for it's St. Louis backdrop. It was shot in my town and, not living in L.A., New York, Chicago, Vancouver or Atlanta I don't often get the opportunity to recognize the shooting locales from my own day to day life. But objectively I also think it's a good-looking film with its Christmas decor and rustbelt grit - a great setting for a small-time crime oddyssey through the haunted looking alleyways, liquor stores, parking garages and brothels to the 'nice' neighborhoods literally across the street and the flimsy feeling West County white-gilt-edged shopping malls.

Scott is supported by Frank Mosley, Alexia Rasmussen, Dasha Nekrasova, Gil Darnell and Peter Mayer. The late St. Louis stage actor Linda Kennedy has a good turn too. Love to see more of this type of crime picture made locally. Already looking forward to Josh Guffey's All Gone Wrong soon.
Posted by jedidiah ayres at 5:30 AM

I'll be checking this show out.

Have you seen a Belgium series called 13 Commandments? Just about to finish it up. I'm not typically a big fan of serial killer shows, but describing this show as mainly that does it a disservice.

For one thing, it does have a bit of gallows humor (something so many of the other police procedurals keep missing).

have not heard of that one - thanks

Well, I may have jumped the gun a bit on 13 Commandments. At about the tenth episode mark it kind of jumped the shark a bit. It's still a better than average series, but the first nine episodes were much better than the last four.