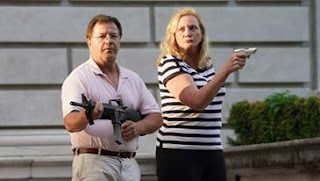 What a shitshow June was! Holy moley. Even by 2020 standards it blew uncles. Many, sweaty uncles with psoriasis of the crotch. Halfway through this ridiculous year and I'm not going to cover all the movies I've seen, but I thought I'd go give a top-5 new to me crime flicks by decade so far.
1940s/50s 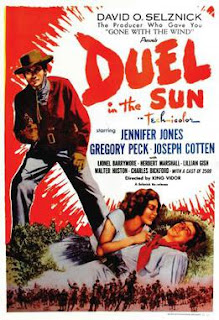 Duel in the Sun - King Vidor (1946) - This one's been on my list something like fifteen years, but somehow I still wasn't prepared for how great the climax would be. There's plenty to provoke in this romantic western melodrama, but it's the breathless bloody expressions of lust in the ferocious finale that really are worth everything that came before whether you found it hokey or offensive. Never would've predicted Gregory Peck could be such a great shitweasel. Jennifer Jones, Joseph Cotton, Lionel Barrymore, Lillian Gish, Harry Carey, Charles Bickford and the disembodied voice of Orson Welles all add to the lush hyper-reality of the production. 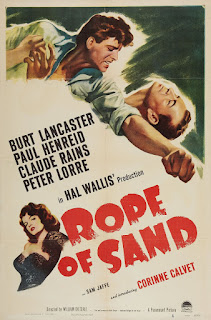 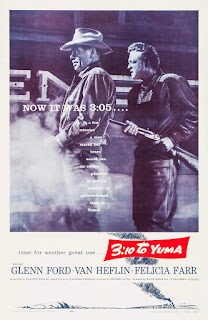 3:10 to Yuma - Delmer Daves (1957) - Glenn Ford and Van Hefflin are a great pair as the outlaw and ordinary citizen charged with getting him on the titular train - they get to know each other over the course of a couple of days with the bad man's gang in pursuit. Tense, turse, bromantic drama from Elmore Leonard source material. Still surprised that neither adaptation of the short story used Leonard's terrific ending though. 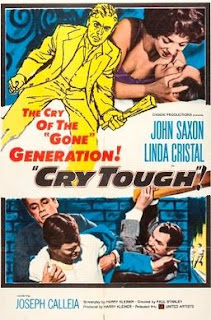 Cry Tough - Paul Stanley (1959) - John Saxon plays a Puerto Rican street tough who wants to go straight (blazing a trail for Al Pacino I guess), but ends up embroiled in violent crime and tangled up with a woman who won't be tied down. 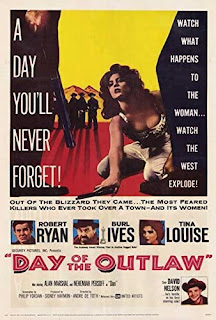 Day of the Outlaw - André De Toth (1959) - Easily the pick of the bunch. This sharp, stylish and deeply moody western about humanity and morality recognizing neither culture nor law resonates far beyond the runtime, frames' edge and performances. It's lovely to look at and chilling to behold. Robert Ryan and Burl Ives do the heavy lifting. Would make a great double or triple feature with The Great Silence or The Hateful Eight. 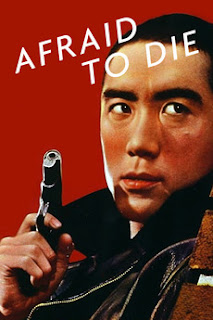 Afraid to Die - Yasuzō Masumura (1960) - The son of a prominent crime boss decides to get out rather than move up, but complications ensue. I dig yakuza movies of the 20th century - especially those made shortly after the decimation and reconstruction of Japan. This one doesn't have the punk energy, extreme nihilism, self-mythologizing nor deconstructionist vibes some of my favorite examples of the genre do, but it has quiet humor and humanity I appreciated. 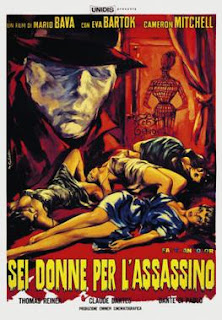 Blood & Black Lace - Mario Bava (1964) - No idea where this one stands among the cult of Bava, but being brand new to his work I'll say I enjoyed the hell out of it for the same reasons (and more so) that I've been enjoying his other work - eye-popping visuals (stunning color work, set and costumes etc.). I'm no giallo enthusiast, but his films have opened me up to the possibilities inherent in the genre (and various adjacent subgenres) more than anybody else. 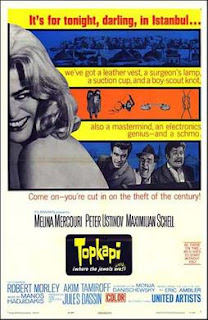 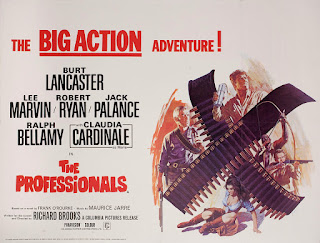 The Professionals - Richard Brooks (1966) - Holy hell, I wish I'd sought this one out earlier. Handful of these last-job-of-aging-mercs-and-thieves westerns that I love and that stand apart and superior to The Magnificent Seven heroic stories for my money. This one fills the gap between The Wild Bunch's nihilism and the uh slightly cornier aspects of Vera Cruz and seems to have H-I-T writ all over it. No idea how it was originally received, and I know several folks who love it, but I'm genuinely surprised I've not heard it listed as one of the all-time favorite westerns of more folks. Seems like a no-brainer to me based on the cast alone: Lee Marvin, Burt Lancaster,  Robert Ryan, Woody Strode, Jack Palance and Claudia Cardinale. 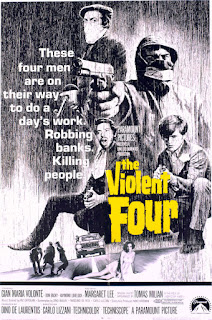 Violent Four - Carlo Lizzani (1968) - Went through another round of crossing poliziotteschi off my to-see list and after a couple dozen samples the bloom's coming a bit off the rose now. I very much enjoyed Mike Malloy's Eurocrime documentary and was a little flabbergasted to learn the sheer volume of the crime pictures cranked out in such a brief time and naturally the overlap between pictures breeds a little contempt, but this nasty little picture from the beginning of the movement is a good example of why it was such a popular one. 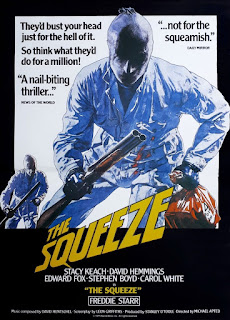 The Squeeze - Michael Apted - Stacy Keach is fantastic as an ex-cop whose ex-wife's new husband hires him to find her and his young daughter who've been kidnapped by some mean bastards. Many problems arise, but the most persistent is that Keach is a blackout drunk (cost him his job and his marriage) who can't stay dry long enough to do anything to redeem himself - rather, he dries out repeatedly, then makes exactly one competent step and gets blotto again, each time more dangerous and pathetic an episode than the last. not somebody I think of as a real behind the camera personality. Not someone whose work I seek out based on his name. He's made several pictures I've enjoyed, several I've actively disliked and a bunch I've never seen and never even thought about. Imagine my surprise when I came across this one. The best new to me 70s crime picture I've seen in a while. Just fucking cold, hard, misanthropic nastiness. Really terrific. 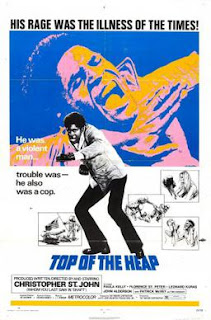 Top of the Heap - Christopher St. John - The only narrative feature written and directed by St. John who also stars as an urban cop fighting a too-many-fronts war against his very existence - as a cop, as a black cop, as a man, as a black man, as a husband, as a lover - something's gonna snap soon. To relieve the pressure of the constant posture-shifting and terrain-reading he escapes into daydreams that reveal his innermost and un-expressed wishes and fears that inform the enormity of his burden (he imagines himself in a pre-civilized Eden where he is free to enjoy his mammalian delights and in a futuristic utopian society where he is free to maximize his intellectual potential and satisfy his curiosity). The fantasies come out of nowhere to inject a little... I dunno The Ninth Configuration(?) into the otherwise grounded (and pounded into the ground) drama and the ending lands hard. 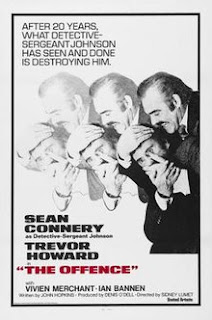 The Offence - Sidney Lumet - Sean Connery plays a detective in danger of losing his way while trying to catch a sexual predator. A career's worth of baggage dealing with the horror of the job - day in and day out dealing with the ugliest crimes has done perhaps irreparable damage to him and when he gets a moment alone to get the truth out of his suspect he brutalizes the man in a troubling sequence of dramatic intensity I've only seen from Connery in another Lumet collaboration, The Hill. His physicality was never more imposing and his psychological duress is palpable. It's really a stunning, slow burn of an anti-thriller that feels like a direct response to exceptional-cop popcorn fare of the day (the anti-Dirty Harry?) 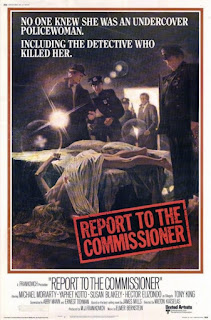 Report to the Commissioner - Milton Katselas - Michael Moriarty plays an idealistic white vice cop becomes caught in the middle of a dangerous case involving a murdered female undercover colleague and the drug dealer she was getting close to. Yaphet Kotto is terrific as Moriarty's cynical veteran partner trying to help him wise up before his naivete gets someone killed. All the storylines have been covered in cop dramas and thrillers since forever, but something in the alchemy of the subject matter and the time it was made abra-cadabra'd some genuine tragic magic with an all-timer of a climax. Ho-lee-shit. Susan Blakely, Tony King, Héctor Elizondo, Bob Balaban, Vic Tayback, William Devane and Richard Gere fill out an impressive cast. 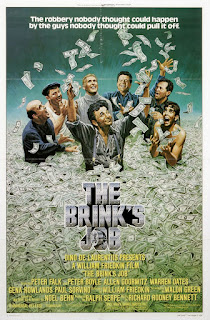 The Brink's Job - William Friedkin - This is a shaggy-dog, dreamers/losers, comic take on the story of the 1950 Brink's heist with a cast to die for: Peter Falk, Peter Boyle, Warren Oates, Allan Garfield, Gena Rowlands and Paul Sorvino. The tone is warm and the touch is light and it goes down very easy - like a less-broad Logan Lucky. Between the cast, the steady hand behind the camera and the period setting it's crime comfort food that feels like it should be better remembered.
1980s 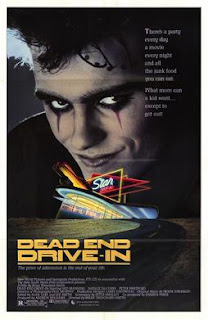 Dead End Drive-In - Brian Trenchard-Smith - One I absolutely would recommend for everybody. First, it's a fucking amazing concept - punks and undesirables corralled in a purgatorial drive-in movie theater. They can't leave, but most don't even notice, let alone mind. They're kinda content to watch action movies (BT-S's The Man From Hong Kong and Turkey Shoot are both featured), have sex in their cars and get coupons for the concession stand. It's a great metaphor for malcontents of the Reagan-eighties distracted by MTV and shopping malls, but mostly it's a whole lotta fun. 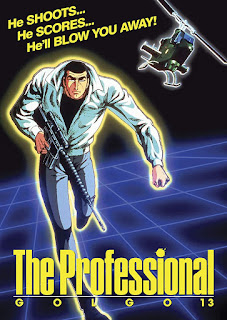 Golgo 13: The Professional - Osamu Dezaki - The first anime feature I've ever enjoyed. It's so stylish it's easy to see where folks from Michael Mann to John Woo and Christopher Nolan found inspiration for their visual storytelling. Based on the popular Manga, it's only one of several film and television adaptations including two 1970s live-action turns from Ken Takakura and Sonny Chiba. I watched a few and 1983's The Professional stands high above all of them. 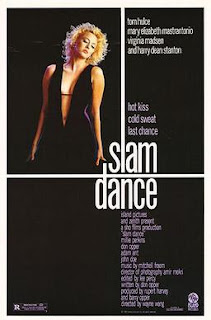 Slam Dance - Wayne Wang - A man scrambles to escape being framed for the murder of a beautiful young woman whose story is told in flashbacks and things get convoluted and nearly incomprehensible pretty quick. The whole thing would probably feel like a pointless retread of film noir's greatest hits if it weren't for the big capital style Wang brings to the whole affair. One of those movies that I probably would've resisted easily and maybe even disdained in its day, but removed thirty some years it's a terrific, weird little abstraction of noir tropes through the extreme now-ness of 1987. Cast is mostly solid (Virginia Madsen, Harry Dean Stanton, Adam Ant, John Doe, Mary Elizabeth Mastrantonio) and Tom Hulce is quickly forgiven for being a little all over the place... you'd have to be to carry this film. 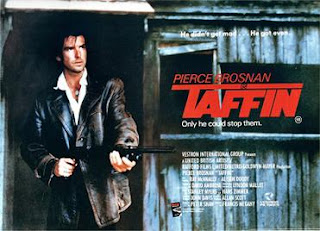 Taffin - Francis Megahy - Pierce Brosnan being Irish and rough. It's... a mood I'm in sometimes. 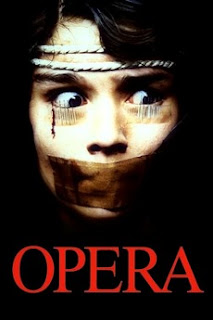 Opera - Dario Argento - Still haven't seen many Argentos, but this one' easily my favorite (a riff on Phantom of the Opera? I've never read it or seen any productions of that one). Really enjoyed the lush production, camera moves, splashy colors and c'mon those pins to keep people from closing their eyes - making them witness terrible shit - that's the stuff nightmares are made of.

i thought i was the only fan.

I haven't seen this film since it was released, but because of your mention I watched it again. It was cool, though it did make me wonder why he kept returning to his apartment without the police. Also, what the heck happened Tom Hulce's career? The man damn near disappeared after this flick. Now I'll go try to find The Brink's Job, which I'm surprised I've never seen.