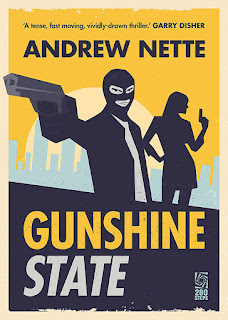 Australian crime writer Andrew Nette's latest novel, Gunshine State has been right at the top of my anticipated fall titles since it was announced for several reasons. First cause I've spent time with the dude talking all things crime fiction and film and he knows his shit. Second, cause I've spent time reading his excellent blog, Pulp Curry, where he further unpacks his knowledge and taste and it's tasty and knowledgeful. Third Gunshine State sounds like a slice of hardboiled crime stuffs along the lines of Richard Stark and Garry Disher and that is absolutely my cuppa. 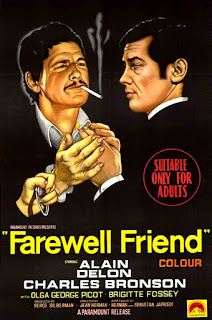 He's been writing about heist stories quite a bit to promote Gunshine State (check out this piece about underseen caper flicks for a taste) and I've been hounding him for a while to gimme a guest spot along those lines.

Holy crap if the flicks discussed in this piece are influences on Gunshine State it only stokes my appetite more. These are my favorite movies. If you're gonna be at Noir Con this year be sure to hunt him down, buy him a drink, get him talking about his favorite subjects and take fucking notes.

Like a lot of writers, I can be a bit of a scavenger when it comes to finding source material for my crime fiction. And one of the things I draw most heavily on is screen culture. Film and television, old and new, provides me with a tonne of inspiration and ideas. Mostly, the influences are subtle, incorporating a particular image, mood, or way of expressing something. Occasionally, it can be more overt. If I am really taken something I’ve seen, I’ll actually try and mould or change the story so I can incorporate it.

My second novel, Gunshine State, is no exception. It's a heist novel set in Queensland, the outskirts of Canberra (Australia’s capital city), Thailand and Melbourne (where I live). I won’t say anything more about the book than that. But here are five pieces of screen culture that I like and, one way or another (I won’t say exactly how) influenced the book. 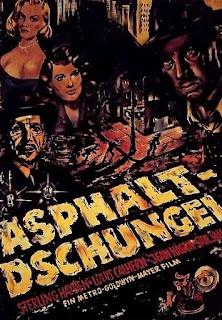 The Asphalt Jungle
There’s good reasons why John Huston’s 1950 film noir is seen as the grandfather/mother of heist films. Based on the excellent 1949 novel by pulp author (and screenwriter) W.R. Burnett aka William Riley, it tells the story of recently released criminal, Doc Erwin Riedenschneider, who borrows fifty grand from a supposedly successful lawyer, Alonzo Emmerich (Louis Calhern) to finance a multi million dollar jewelry heist. Although the actual heist goes off without a hitch, things quickly fall apart due to a combination of human greed, suspicion and double-dealing. 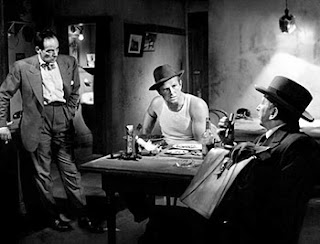 What I love about The Asphalt Jungle, apart from its classic take on the heist always goes wrong trope, is its depiction of setting, an incredibly downbeat unnamed US Midwest river city and the criminals that occupy it. Huston takes us through the process by which Doc Riedenschneider secures funding from Emmerich and recruits his team: the gunman, Dix Handley (Sterling Hayden), the driver, Gus Minissi (JamesWhitmore), Ciavelli, and the safecracker (Anthony Caruso). Huston mercilessly portrays the motivations and human weaknesses driving each of the gang. There are plenty of atmospheric scenes in smoke filled rooms as the gang plan the heist and some wonderfully sharp interactions between the various criminals and the women in their lives, including Hayden’s love interest, Doll Cameron (Jean Hagen), and Angela Phinlay, Emmerich’s young and dangerously naive mistress (a very early appearance by Marilyn Monroe). 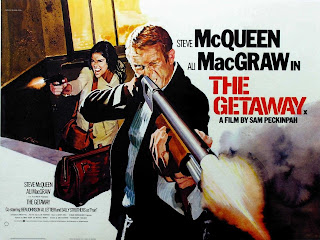 The Getaway
People often talk about Bring Me the Head of Alfredo Garcia (1974) or The Wild Bunch (1969) as peak Sam Peckinpah. They’re good films, no argument from me on that score, but I’d argue his 1972 version of Jim Thompson’s The Getaway, represents the director at his best (I am also partial to the rather seamy 1994 version of Thompson’s book, starring Kim Basinger, Alec Baldwin and James Woods, but that’s another story). 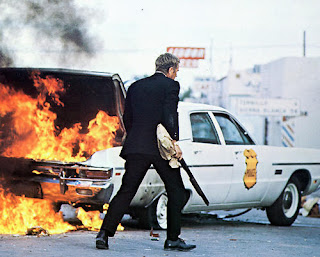 The Getaway opens with career con, Doc McCoy (Steve McQueen) being released from jail and into the arms of his wife, Carol (Ali MacGraw). A major obstacle stands in the way of their plans to start a new life, the crooked official who fixed McCoy’s early parole, Beynon (Ben Johnson) expects Doc to pay him back by doing a bank robbery. It is gradually revealed that Beynon also extorted sex from Carol for her husband’s early release, which creates further tension between Doc and Carol. McCoy reluctantly does the job, which goes very badly, leaving one of gang member dead, another, Rudy Butler (the wonderful Al Lettieri) badly wounded, and Doc and Carol on the run.

The Getaway has a wonderful leanness and economy to it, despite the multiple strands of treachery woven into the story. Not only are Doc and Carol on the run from the police, they are stalked by Rudy and pursued by Butler’s organization, all the while unsure whether they can trust each other. 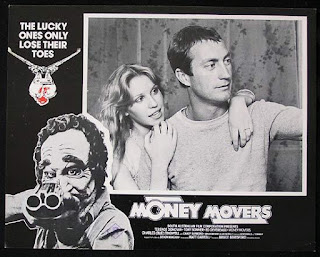 Money Movers
I am a huge fan of Australian director Bruce Beresford’s 1979 heist movie. Brothers, Brian (iconic Australian actor Bryan Brown) and Eric (Terence Donovan), are hatching a plan to rob the armored car company they work for as drivers. They are forced into doing the job earlier than planned when a local crime boss, Henderson (another veteran Australian actor, Charles ‘Bud’ Tingwell), gets wind of their scheme and, with the help of a pair of bolt cutters, persuades the brothers to fast track it and share the take with him. The firm’s management, meanwhile, have also got wind of a potential robbery and are taking steps to thwart it. 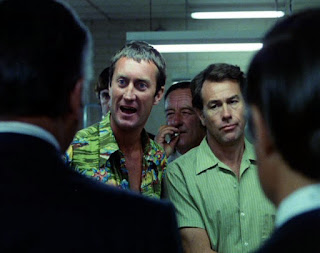 One of the most enjoyable aspects of Money Movers is how deftly Beresford executes the classic noir theme of the paper-thin line between good and bad. Corruption is so pervasive, so matter a fact, it’s hardly commented on. Although the film was shot in Sydney, the location, like that of The Asphalt Jungle, is an anonymous corrupt town. The film also has a wonderful sense of seventies Australian class politics and conflict between workers and bosses. 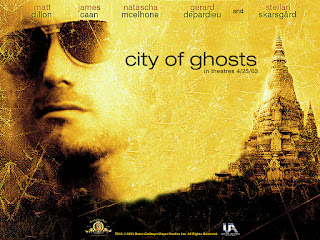 City of Ghosts
City of Ghosts (2002) is another relatively little known film that has had a big impact on me. This is partly because of the setting, Thailand and Cambodia, countries I lived and worked in. Jimmy (Matt Dillon) is a long con artist who grows a conscience after the fake insurance company he’s been fronting forfeits on claims to the survivors of a hurricane. In order to get his share of the proceeds from the scam and escape the clutches of the FBI, Jimmy travels from New York to Thailand where Marvin (James Caan), his mentor and the brains behind their operation has fled. In Bangkok, Jimmy meets up with one Marvin’s associates, Casper (Stellan Skarsgard), who informs him Marvin has gone to Cambodia to escape his former partners in the Russian mob who unbeknown to Jimmy put up the seed money for their insurance scam. Jimmy locates Marvin who is living like a king in a rundown French colonial villa. He’s ploughed the proceeds from their insurance scam into a new project – a proposed casino complex he and his local partner, a former high-ranking Cambodian military intelligence officer, hope will turn Cambodia into the Acapulco of Asia. 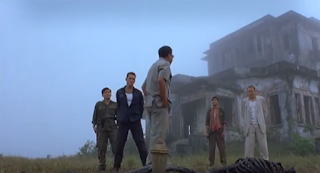 While the plot of City of Ghosts is strictly B-movie, there is a lot about this film that works. Its portrayal of expatriate culture, the collection of dead-beat expats, burn-outs and tourists on expired visas, who hang around the bar providing cryptic advice and Vietnam flashbacks to whoever will pay attention and buy them drinks, is spot on. While there are solid performances by Caan as Marvin and Skarsgard as the suitably sleazy Euro-villain, Casper, Dillon recruited most of the supporting actors from Phnom Penh’s eccentric expatriate community, while the locals are amateurs or drawn from among the few surviving members of the Khmer acting community not murdered by the Khmer Rouge. The locals imbue the film with real grit and authenticity. Another highlight is the camera work by John Pirozzi (whose documentary on Cambodia’s sixties music scene, Don’t Think I’ve Forgotten, is excellent), which captures not just the atmosphere and sense of place but the marvelous quality of the light in Thailand and Cambodia. 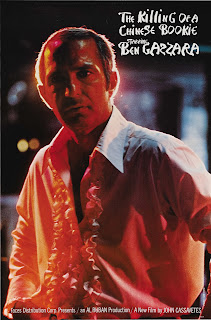 The Killing of a Chinese Bookie
Ben Gazzara is Cosmo Vittelli, owner of a down market LA nightclub, constantly battling to keep his business above water. He is also an inveterate gambler. A night out with his three favorite dancers, “Margo”, “Rachael” and “Sherry” ends up with Cosmo $23,000 in debt. The mobsters to whom he owes the money, headed up by veteran character actors Timothy Carey and Seymour Cassel, offer to wipe Cosmo’s debt if he’ll perform a hit on one of their competitors, an elderly Chinese gangster (the ‘Chinese bookie’ in the title). Of course, the criminals have no intention of allowing Vittelli to live regardless of whether or not he carries out the killing. 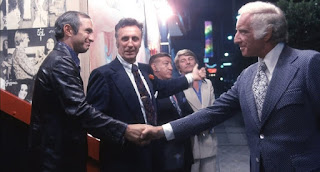 Written and directed by John Cassavetes, this is a stunning tale of low life crime. Gazzara excels as Cosmo, a man with a past, a pseudo pimp who ekes out a living on the fringes of the underworld at the same time exhibiting a strange denial about the reality of his circumstances. This is epitomized by the scene in which, badly wounded and pursued by the mob, Vittelli takes time out to mediate a petty dispute between his cabaret dancers and his lead Singer, the misleadingly titled, Mister Sophistication (Mead Roberts).

There are two versions of The Killing of a Chinese Bookie: the original release that clocks in at over two hours and fifteen minutes and a shorter one that goes for a hundred and eight minutes. Go for the vastly superior shorter version. 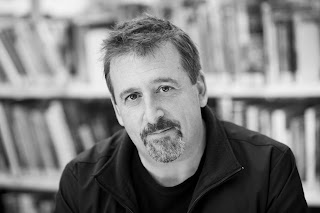 Andrew Nette is a writer of fiction and non-fiction. He is the author of two crime novels, Ghost Money, a crime story set in Cambodia in the mid-nineties, and Gunshine State, out September 2016. His short fiction has appeared in a number of print and on-line publications. His online home is www.pulpcurry.com. You can find him on Twitter at @Pulpcurry. Gunshine State is currently available in e-book and hard copy from the crime publisher, 280 Steps. More information about the book and how to get it is available at the 280 Steps site.
Posted by jedidiah ayres at 4:01 PM