"Is this the dumbest movie ever?" That's what my wife said after hearing the first 20 minutes of Alpha Dog from the next room where she was actually contributing to the management of the household. "No" I ventured, "I think it's a good movie about the dumbest people ever." In defense of my wife, most of the movie's audio is the mtv wigger stylings of a ragtag pack of over-privileged suburban gangsta wannabes. Their leader is Johnny Truelove, (Emile Hirsch), less because he deals a little pot, but because his father Sonny, (Bruce Willis), has a reputation in the underworld and aint that so cool? Johnny's got a problem, Jake Mazursky, (Ben Foster), owes him some money and doesn't seem to be properly motivated to pay him back. Johnny's seen enough gangster movies to know that he needs to apply some pressure to the slightly unbalanced Jake, pronto, and comes up with a brilliant plan to get some respect - kidnap Jake's little brother Zack. The gang gets such a boner over "being hard" that they grab the fifteen year old kid right away and then... wait. Uh, what should we do with him? It's cool, it's cool, let's just y'know? Hangout. Zack, has the time of his life getting to hang out with the older kids, drink, smoke, swim maybe get laid, while Johnny's pot buzz and inspiration begin to clear up and the far more dangerous panic begins to set in. The climax of Alpha Dog is no surprise to anybody who's heard the story of Jesse James Hollywood, the true life inspiration for the film, but the way it gets there often is. It's a thriller with some great dramatic performances, (seriously is that Justin Timberlake?). It's another teen movie, but one with an aftertaste strong enough to be a hangover. It's a damn funny movie too. I wish we could get more of this fare out of Nick Cassevetes, son of the legend, whose other directorial work includes The Notebook and John Q. as well as the sweet-tart romantic drama She's So Lovely with Sean Penn, John Travolta and Robin Wright Penn, (SSL, btw was written by John Cassavetes). On a side-note, breath a sigh of relief that the deal for Brett Ratner to remake John Cassavetes' classic, The Killing of a Chinese Bookie, fell through... (shudder). The whole world dodged a bullet there. Ooh, I know, how about a Christopher Columbus remake of Faces? But I digress. As good as Alpha Dog was, I think an even harder, funnier, sicker true-crime film about over-privileged white kids doing it like in the movies is Larry Clark's Bully, with Nick Stahl and the late Brad Renfro as a couple of teenagers whose friendship is a little too once sided. Marty, (Renfro), is tired of Bobby's, (Stahl), abuse and his girlfriend, (Rachel Miner) convinces him to enlist the help of some friends, (Bijou Phillips, Michael Pitt and the absolutely hilarious Leo Fitzpatrick - a terribly underrated actor whose turn as Telly in Clark's Kids was perhaps so dead on that nobody believed he was acting - as The Hitman). Like all of Clark's films, Bully is full of the sex and drugs and violence in the lives of teenagers and while he draws fire for it, seems accurate, (for a psuedo-sidetrip from Clark, check out the excellent, true-crime adaptation Another Day in Paradise with James Woods and Melanie Griffith. Sidetrip because it's a period piece and though it features teenaged protagonists, Vincent Kartheiser - currently tearing it up in Mad Men - and Natasha Gregson Wagner, adults for once have roles).
Posted by jedidiah ayres at 7:06 AM 5 comments: 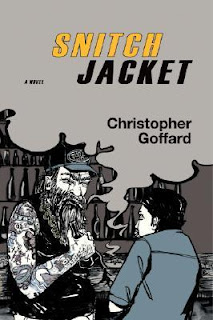 Snitching is one of those oft-maligned professions that just doesn't get a fair shake in fiction. Most of the time, just the mantle of 'snitch' seems to be all the development these characters need. We read it or hear it and immediately we know who we're supposed to conjure - sleazy, weak-willed, turncoats of dubious moral stripe and questionable hygiene. Well, not no more. Christopher Goffard's debut novel Snitch Jacket places us cozily, (uncomfortably so), into the shoes of Benny, a sleazy, weak-willed, turncoat of dubious moral stripe and questionable hygiene, (as attested to by his wife - Use a Q-tip, Benny!) and dares us to uh, like him. Benny rationalizes his snitching so he can sleep nights, but when he gets caught between his two idols, Gus "Mad Dog" Miller, a burly, barfly, badass with some great Nam stories and the slick undercover narco who turned Benny out, he's faced with some hard choices. The book is broken into parts, shifting in tone and POV perhaps too often. It's too clever by just that much and the plot wraps around itself unnecessarily, but the portraits of Benny and Gus are rich, hilarious and surprisingly heart felt. I'm gonna go out on a pretty sturdy looking limb and call it the best book about a snitch since The Friends of Eddie Coyle and probably destined for a similar cult in years to come. Friends, btw was made into a pretty decent film starring Robert Mitchum and Peter Boyle and directed by Peter Yates, (Bullitt, Mother, Jugs and Speed), but I don't think it's ever seen the light of DVD. Write your congressperson about this. SJ is available in paperback, but if you can afford a hardcover, you'll get your money's worth out of the great jacket art, (sadly changed for the trade paper release). Of course, "the snitch" may soon have a more honored place in pop-culture thanks to Andre Royo's incredible and humane turn as Bubbles, on The Wire, but till that time, enjoy Snitch Jacket while it's still a novelty.
Posted by jedidiah ayres at 12:40 PM 6 comments:

The Limey, Steven Soderbergh's follow up to Out of Sight, with Terrence Stamp and Peter Fonda deserves to get a run through your cerebral cortex. It's a splintered little crime tale that showcases Soderbergh's greatest strengths, (his knack for finely crafted popular entertainment that you don't hate yourself for enjoying and editing - for once the splicing of footage from an older film into a new one doesn't feel gimmicky or showy - just cool). I've also come to the conclusion that Nicky Katt is never going to be a big movie star and that's okay, but damn how many little movies does he have to steal before he gets his own star vehicle? Check him out in The Limey, Way of the Gun, Full Frontal, Suburbia, Snow Angels - it goes on - and get back to me. Speaking of Limeys, Gordon Harries, Brit freelance wunderkind, has got a new gig or two or three. Look out for his regular contributions to The Hub and Crime Scene as well as his blog Needle Scratch Static, where you'll get the skinny on the way they do it across the pond. New issue of The Hub, Harries profiles Dashiell Hammet in the first of hopefully many author profiles for those of us with a taste for crime.
Posted by jedidiah ayres at 4:15 AM 5 comments:

War!huh! Good gawd, yall, what is it good for? - Great fiction. Daniel Woodrell has produced three short pieces in the last year dealing with war, the marine corps and difficulty of re-entering civilian life. Nightstand, (Esquire magazine June issue), is about a former marine who kills a man he finds invading his home and the complicated connection he finds he shares with his victim. The Black Step, (New Letters magazine vol. 74 no. 4), follows a young soldier home from the Middle East where he nurses his own mental health, takes care of his mother and goes through the motions of a relationship with a divorcee "who has chosen me to be the man she needs" (this one has a simply devastating ending). The current issue of Narrative Magazine online features a new story, Shitbird, about a 17 year old marine on the island of Guam, in 1971 who is amused with marine life, the "farcical orders" and "absurd obedience" and gets lost in the jungle, high on acid and maybe comes upon the last Japanese soldier still fighting WWII. Shitbird is a fresh stab at a story that's been percolating for at least five years, (see Amnesty Barracks, another short story dealing with the Guam crew from New Letters magazine vol. 69 nos. 2&3 2003) and could have the makings of a novel. A damn fine novel. More good news for Woodrell fans: Winter's Bone - the movie - is set to be filmed in the Ozarks in the next several weeks, Debra Granik, the writer/director of Down to the Bone, (the film Martin Scorcese saw and said get me that Vera Farmiga woman for The Departed - what is it with this director and "Bone" movies anyhow?), is helming with Deadwood co-stars, Garrett Dillahunt and John Hawkes, (as Teardrop) rumored to be involved. Hopefully, a great film will be made and the Woodrell canon will come back into print. Mean time, enjoy the jarhead stories and pray they keep coming.
Posted by jedidiah ayres at 6:10 PM 5 comments: