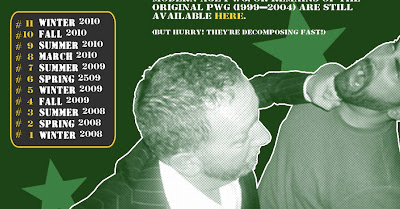 Over at Ransom Notes, I'm talking Greg Rucka and Matthew Southworth's Stumptown and Rob Guillory and John Layman's Chew - both of which I was exposed to through the noble and altruistic efforts of Kieran Shea. Thanky sir.
Posted by jedidiah ayres at 10:06 PM 6 comments: 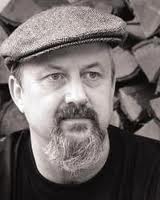 I've been told by all who love me and many who don't that I do have a chip on my shoulder, if a mighty fucking oak can be counted as a chip. My parents told us to upwardly mobile, to educate ourselves toward finer streets--they wanted us to aspire to a class they clearly despised and feared. They understood that for us to succeed we'd have to hate them a little bit in order to say goodbye. Not all of us cared to do that. There's a very fine book called The Hidden Injuries of Class that ought to be read, mostly by those who will know the details from the inside and will recognize the hidden influences they operate behind.


My interview with Daniel Woodrell is up at Ransom Notes.
Posted by jedidiah ayres at 4:48 AM No comments: 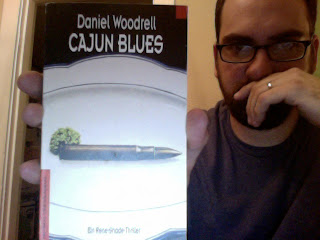 Craig McDonald's 2006 interview with Daniel Woodrell (that appeared in Craig's excellent collection of interviews Rogue Males) has been posted on the Mulholland Books site.

My own interview will be posted at Ransom Notes tomorrow.
Posted by jedidiah ayres at 9:05 AM No comments: 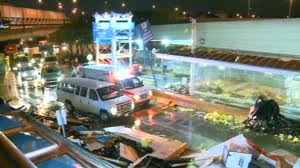 Tornadoes this week. Scared the piss outta Philip Kerr during his event. Felt bad about that, but hey, I'm a mid-westerner and take it in stride. 'Course I wasn't trying to catch a flight into or outta town.

Tim Lane's Whirling Gypsy Comic Carousel Burlesque was a bunch of fun. That guy is a steaming pile of talent. I kinda hate him for it. I'm hoping it becomes a monthly event and if it does, I'll letcha know. And if it does, I nominate Scott Phillips to be the voice of any midget you care to draw. Draw one. Phillips has a voice for it. Betcha a dollar.

Couple quick notes on upcoming events. N@B with Frank Bill and Aaron Michael Morales - looking likely to be June 11, but I'll confirm that when I can. Meanwhile Steve Earle will be here May 16 to support his new novel I'll Never Get Out of This World Alive. Count me in. And Donald Ray Pollock is coming through Julyish in support of The Devil All the Time. Can't fucking wait.

This week I read Mama's Boy by Rick Demarinis, Cowboys by Gary Phillips and Brian Hurtt, The Worst Thing by Aaron Elkins, A Drop of the Hard Stuff by Lawrence Block and Fun and Games by Duane Swierczynski. Talking big Joe Lansdale, Hap, Leonard and the Texas Badassery of Devil Red at Ransom Notes. Now I'm clearing some brain space for The Walking Dead on DVD. Stand back.
Posted by jedidiah ayres at 7:54 PM 1 comment:

I Didn't See the Devil 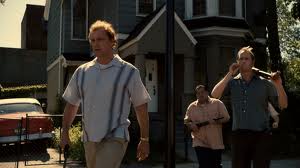 Gaaah! You go spend one weekend out of town and completely miss your chance to catch Jee-woon Kim's I Saw the Devil in St. Louis. Crap. Just, crap. Those kooky Koreans are churning out some of the most creative mayhem in pictures these days and I haaaate to have missed that one. Did catch up with The Good, the Bad, the Weird and The Chaser in the last couple of weeks, but that's only going to tide me over so long. Let's see, if I wanted to go to the pictures this week it was gonna be uh... Jonathan Hensleigh's Kill the Irishman or Duncan Jones' The Source Code. Ended up seeing both.
Irishman was perhaps the most enjoyable puffy-beefy-red-faced-middle-aged-white-guys-with-lousy-hair-cuts-beating-on-each-other-period film since Mulholland Falls. Irish had plenty of faults, but remained enjoyable all the way through and Source was definitely of a piece with Jones' first film Moon - trippy sci-fi Philip K. Dick-ian fare that didn't make you feel retarded for hiking your plausibility skirt and just going with it. Criticizing either film for their science means you're just missing the point... I mean, would you do that with Star Wars? 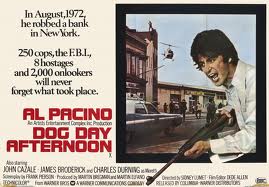 Had a few posts over at Ransom Notes recently. The first was inspired by Michael Connelly's Mickey Haller character - the same one portrayed by Matthew McConaughy in The Lincoln Lawyer and also Connelly's latest book The Fifth Witness. Had to do with defense lawyers and how the tide of popular entertainment has seemingly shifted hard out of their favor in the last fifty years. So if ya feel like getting all ponderous and leaving a comment go here. The second was a recognition of the late great Sidney Lumet and had a rundown of some of his crime films beyond just Serpico, Dog Day Afternoon and y'know, Before the Devil Knows You're Dead. Got one to add to the list, praise me for remembering or lambaste me for leaving off? Go here. The third was a quick summation of some mystery award noms.
Tuesday I'll be headed to the St. Louis County Library HQ to see Philip Kerr, the author of one of my favorite PI series ever, the Bernie Gunther books. Seriously, go check that shit out now. The first three titles are collected in an omnibus called Berlin Noir and they will kick your ass. I'll be posting further on Kerr at Ransom Notes, tomorrow.
Wednesday I'll be providing my vocal talents (cough) to a multi-media presentation of a graphic short by Tim Lane over at Subterranean Books. If you live in St. Louis and you're liking the crime stuffs, check out the extra curricular activities hosted by Subterranean. Tim's event will be a monthly one, (if you attended our graphic novel N@B w/ Tim and Matt Kindt, you'll know about what to expect), plus Scott Phillips is teaching a writing workshop on Tuesdays and hosting the BYOB event once a month with Paul Friswold - I participated in that one last week reading from George V. Higgins' The Friends of Eddie Coyle. Good fun.
Posted by jedidiah ayres at 11:01 AM 2 comments:

Just read the new Daniel Woodrell story that appears in the April issue of Esquire called Twin Forks and it strikes me that it makes a nice companion piece to the last one he had there, Night Stand - which, itself was a great marriage of his rough Ozark stuff and marine-centric short stories (as was the devastating Black Step - New Letters.) Twin Forks and Night Stand deal with two sides of similar no-win situations. I like reading them back to back and soon, I'll get to do so without flipping too many pages from multiple sources. The Outlaw Album, his first collection of short stories is due out in October and that's just damn good news.

Spent the weekend with Rod Norman and Frank Bill in Indiana doing some video interviews that may find their way into some hidey-hole on the internet soon. Frank will be making his way back to St. Louis for a N@B event probably in June along with Aaron Michael Morales, so stay tuned for more on that. You know one of the best things about talking with writers is coming away with really solid recommendations and after hearing the name again and again, Frank's say-so pretty much made me feel all sheepish for never having picked up Craig Clevenger or Will Christopher Baer. So, now I'm hip deep in the first of Baer's Phinneas Poe trilogy Kiss Me Judas and after I thank Frank, I'm gonna go beat my head pulpy for not picking this one up sooner. Ex-cop, junkie just released from a mental institution takes a hooker up to his hotel room and wakes up maybe 36 hours later in a bathtub full of bloody, melted ice and clutching a hand written note 'If you want to live, dial 911.' Now he's chasing the broad through the Western US half interested in retrieving his kidney, but more interested in maybe hooking up with her again. I mean, he might be in love. Over at Ransom Notes I'm going on about my out of control reads-in-progress.

Speaking of ridiculously hot femme fatales who start off books with a bang, Duane Swierczynski's The Blonde has been optioned by Michelle Monaghan and looks like a production date may be materializing soon. Man, I hope they do that one justice.

And in case you didn't know, Kent Gowran has started publishing a new flash fiction site, Shotgun Honey. He's looking for kick-assery under 700 words. Can you do it? N@B alumn Daniel O'Shea has the first piece up there already.
Posted by jedidiah ayres at 2:49 PM 3 comments: