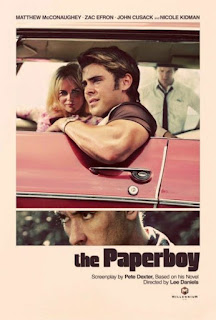 Want to finish 2011 on a high anticipatory note? I did, and now I can thanks in part to Jimmy Callaway and the fine folks at The Criminal Complex for breaking the news to me that Pete Dexter's The Paperboy is coming to the screen in 2012, directed by Lee Daniels, (whose Shadowboxer is low-grade notorious for its WTF factor, and who produced tough-hearted shit like The Woodsman, Monster's Ball and Precious). It will star Zac Efron, Nicole Kidman, John Cusack and Matthew McConaughey and check this here poster the hell out. Sahweet. 'Course it all starts with Dexter for me. That cat is badass, and if you don't know his work, take this as my enthusi-fucking-astic endorsement of his particular brand of rough/perty prose and hardnard story stuffs. Yeah, color me excited.

Speaking of Dexter-level wordsmiths, I had to include Rick DeMarinis's Mama's Boy on my 2011 favorite novels list at Ransom Notes even though it weren't technically no mystery book. DeMarinis does write crime, but yeah, it was a stretch to put that particular book on a mystery blog. Please avail yerself of DeMarinis through his novels or short stories (he's got like three collections of shorts - fantastic) and tell your friends and neighbors to as well. He deserves a much more prominent place in the reading public's consciousness. That particular list is, I think, a helluva good showing for the last year. Even with penalizing some of my favorite books like Craig McDonald's El Gavilan, John Rector's Already Gone and Scott Phillips' The Adjustment for their authors having appeared on my 2010 list, it's some strong ass shit. Check it out and tell me what you think.

Even more lists to come. Just cause. See you at the end of the world.
Posted by jedidiah ayres at 11:01 AM 5 comments: 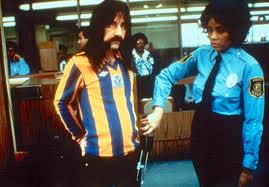 What a sorry cliche. Just made a list of my favorite debuts of 2011 only to realize that they were all penned by men. So, I completely changed my list and made it more PC... Or no, I didn't, but I did make a second list of books that I read in 2011 by lady writers that were my first exposure to them (the odd short story aside). I really hate to ghettoize female writers, and if that's exactly what I've done by adding a second list then... write a kick-ass book and entice me to read it, I dunno what else to say. Anyhow, both lists are up today at Ransom Notes. Go take a look and tell me what a jackass I am. Incidentally, it's not a 'first novel' list or you might've seen names like Donald Ray Pollock or Benjamin Percy up there - it's a first book of fiction list, so collections by Rusty Barnes, Alan Heathcock and Frank Bill are included. 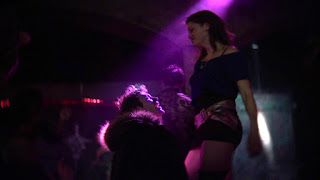 Julian Grant and company have wrapped up the Fuckload of Scotch Tape shoot, and that's damned exciting. I'll be headed to Chicago late in January and hope to catch a WIP screening.

Friggin Keith Rawson man. Been doin those interviews 'n shit. You see his latest one with William Gay? Says we'll finally see The Lost Country in 2012... Hope so. 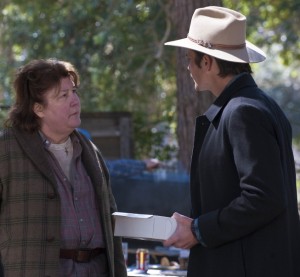 Watched season two of Justified last week. Dunno if I've ever seen a more dramatic improvement from first to second season of a television show. Liked the first season enough to check out the second, but hot damn I really enjoyed the second. Lot of that had to do with the emmy-worthy performances of Margo Martindale, Jeremy Davies, Brad William Henke and Joseph Lyle Taylor as the Bennett clan. Walton Goggins, Raymond J. Barry, Damon Herriman, Jere Burns, David Meunier and Kevin Rankin are good to watch too, and the more the show leans on them the stronger it is.
Posted by jedidiah ayres at 1:02 PM 1 comment:

Putin on the Ritz 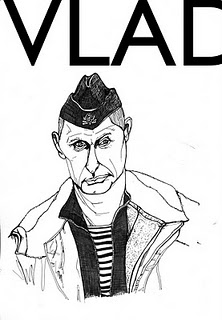 Holy shit, despots of the world beware; 2011 still has teeth. Osama Bin Laden, Moammar Gadhafi, and now Kim Jong Il...  Is it mere coincidence that D*CKED is now on sale for the holidays? Pick it up before another one bites the dust... and rises again, and brings about Armageddon for reals. Suck It, my story from that collection is very... unlike anything I've ever published, reckless and irresponsible speculation leavened with cheap shots at stars of the world stage aside. It features an exclusive blood club formed by the former VP, KJI and Vladimir Putin. Vampiric themes abound in D*CKED, but for more Vlad-the-I'm-Paler fun check out VLAD, Liam Cassidy's official Putin fanzine.

Meanwhile, year-end best-of lists abound and I'm adding to the collective ignorance with giddy enthusiasm. Today at Ransom Notes I posted on my favorite first entries in new series, and last week I had fun with the list My Year in Villains which featured evil little shits from a distinguished list of authors including N@B alum Scott Phillips, Jane Bradley, John Rector, Duane Swierczynski and (honorary N@B dude 'cause Corydon was more or less the N@B road show yeah?), Donald Ray Pollock.

Been reading some horror and sci-fi tinged stuffs lately - Stephen Blackmoore's City of the Lost, Chris F. Holm's Dead Harvest and at the moment, William Gibson's Zero History which, if nothing else, is making me want to revisit Abel Ferrara's New Rose Hotel. I encounter very little affection for that one wherever I see it mentioned, but have a foggy, dreamy fondness for it myself. Also has me wanting to re-experience Olivier Assayas' Boarding Gate which I have a great gushing love for. Hmmm, Asia Argento was in both of those, weren't she? Dunno how much that has to do with my opinions, but how about that Assayas dude? Demonlover, Boarding Gate, Carlos... That's a helluva decade.
Posted by jedidiah ayres at 9:21 AM 5 comments:

FLOST - Pics From the Set

So, Julian Grant and crew are quickly approaching the wrap of shooting Fuckload of Scotch Tape. I'm pleased as hell with the stills I've seen from the location shoots. Thought I'd post some here for your whetting benefit. 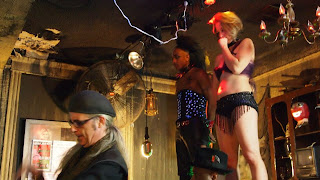 The above is from Exit Chicago - the set for my fictional strip club The Beaver Cleaver. I'm told that JG (in the hat) keeps his clothes on. 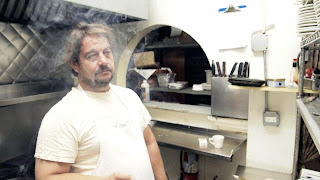 Louie Lawless as Chuck. Watch out. 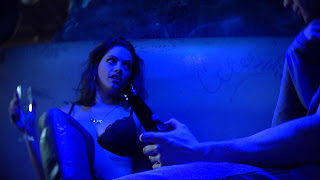 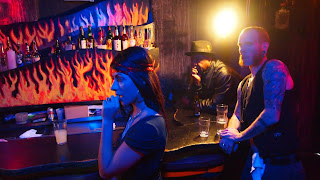 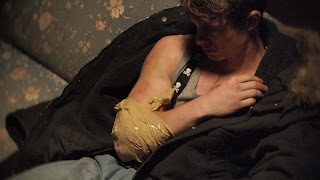 The titular fuckload of tape. 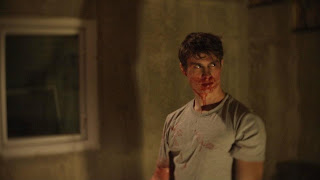 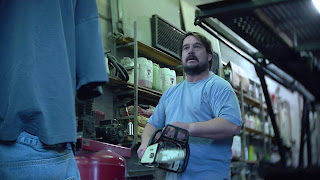 It's all fun and games till somebody loses a limb. 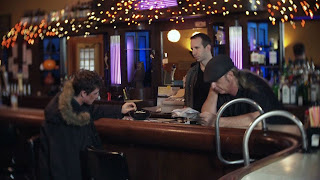 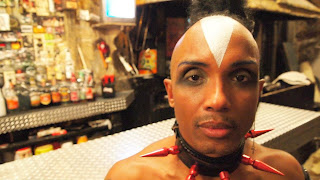 Vaughnj The Chameleon brings a Road Warrior vibe to The Beaver Cleaver.
Stay tuned for more progress reports.
In tangential news, Paul Von Stoetzel has locked in a DP for his short film based on my story Viscosity (Out of the Gutter #6) to begin shooting soon. Can't wait to see this one too.
Posted by jedidiah ayres at 1:23 PM 5 comments: 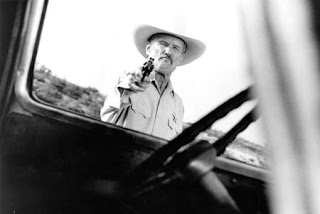 Over at Ransom Notes I'm talking border books. Specifically Sebastian Rotella's Triple Crossing, Tricia Fields' The Territory and the brand new stand alone from Craig McDonald, El Gavilan. I think Craig's taken a big ol' step forward with this one. It's not technically a border book as it's set in Ohio, but it revolves around illegal immigration and the sticky spot people from any point in the political spectrum are placed in when the neat and tidy policies they've constructed in the abstract are tested on the ground and they are face to face with the reality of human beings with an instinct to survive. The Hector books are fun, but this one gets down and nasty in a way that's difficult to take too seriously when it's Hemingway, or some other person of historical note doing the dirt.
I swear I was thinking of Ry Cooder while reading El Gavilan long before there's a mention of him near the end of the book. I just heard some of those shimmery guitar sounds echoing around the prose - probably, now that I think about it, has something to do with the fact that he composed the score for the 1982 Tony Richardson film The Border with Jack Nicholson and Harvey Keitel. I watched it again a little over a year ago and it hadn't aged well, but that soundtrack made an impression. Another movie I thought of while reading El Gavilan was John Sayles' Lonestar. Something about McDonald's salty dog sheriff Able Hawk conjured pictures of Kris Kristofferson in my mind and I thought of his great evil turn in that picture from 1996. Bet I haven't watched it in over ten years, but it's one I think of often and fondly. Oughtta revisit it soon. 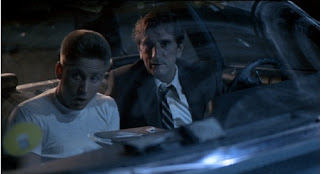 Last week at Ransom Notes I was going on a bit about repo men as protagonists - why they seem such a natural for edgy crime shit - and wondering why the hell I couldn't think of more of them. Yeah, I mentioned Harry Dean Stanton in Alex Cox's Repo Man, Fritz Brown from James Ellroy's Brown's Requiem and even Jude Law and crew from last year's underrated Repo Men (Blade Runner rip-off, Brazil rip-off, cheap gimmicky one-trick-pony? Don't care. I really liked it). The whole thing was sparked off by my reading Rick Gavin's muy fun Ranchero about a Dixie repo man tearing ass through Mississippi after the asswipe who brained him with a shovel on the job (think I compared it to Hap & Leonard crashing a Cannonball Run movie, and maybe that's not doing it any favors, but it was quick, easy reading). Bryon Quertermous brought Joe Gores' Dan Kearney into the conversation and Lynn Kostoff offered up Mike Magnuson's Gunnar and Dewey from The Right Man For the Job, so thanks guys for those. I'll have to give em a looksee. Still... that seems like an awfully low count.
Anybody see Marilyn Stasio's Notable Crime Books of 2011 list in the New York Times? Some good picks there, including George Pelecanos, James Sallis, Phillip Kerr, Michael Koryta and her 'favorite noir'? Scott Phillips' The Adjustment. Fuckin A. 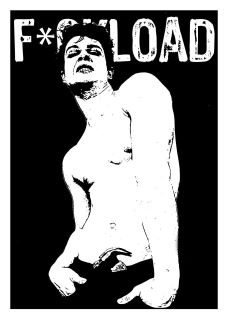 Julian Grant reports cops crashing the set of F*ckload during shooting the other night. The issue? Sound like, uh shooting. Guerilla film makers are no strangers to this kind of thing. Dunno how many times the Mosquito Kingdom sets were struck and stowed, packed or abandoned to avoid the law, but it were more than I cared for. Sounds like they're on track to wrap up production before Christmas. Can't wait.
Posted by jedidiah ayres at 6:52 AM 1 comment: