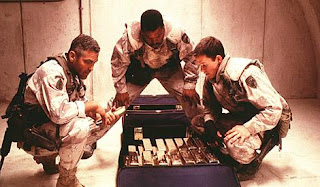 The Do Some Damage podcast is back for a second season this week. Once again host Steve Weddle spends a theoretical seven minutes chatting with Holly West about TV options, Chris F. Holm about music and I flap my lips about movies. 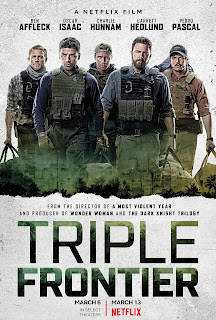 I took the opportunity to double down on triple titles beginning with J.C. Chandor's super soldiers turned thieving bastards Netflix original (and still in limited theatrical release) Triple Frontier. Ben Affleck and Oscar Isaac lead a stud-studded cast who scowl and grunt and speechify in order to make it clear how seriously they're taking their decision to put their military training to personal use and commit crimes. By their logic nobody in a position to punish them should care too much as long as they only steal from and kill a Mexican cartel boss in Mexico.

Their logic holds, but their plan does not. Soon they're having to run while lugging many many duffel bags of cash with them through the jungle over mountains and into the ocean while the manhunt/treasure hunt focused on them becomes overwhelming. 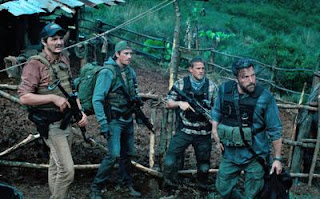 Sounds like a great setup for a fun adventure flick, a hardcore heist movie or a simple plan gone to shit noir and it's not really any of those things. Hell it could've become a revolution movie, but the whole 'our system is so broken we have to turn to crime to get by' premise gets shame-swallowed in the end with a big sigh and a 'we're still bros, right?' hug-a-thon and at times almost audibly pleads "The troops, who will support the troops?" Ultimately it gets a the go-ahead from me mostly for the cool location shooting and a handful of good action moments, but I really was hoping for a lot more from it. 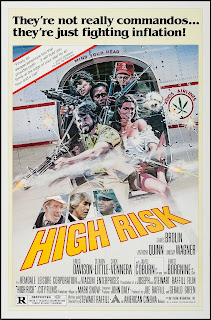 On the podcast I recommend checking out another (and better) Chandor crime flick A Most Violent Year also starring Isaac, Jessica Chastain and David Oyelowo and available on Netflix now, but if you want to take another crack at the Triple Frontier formula and come up with different results look for David O. Russell's Three Kings or shit, how about Stewart Raffill's High Risk (on Amazon Prime). Another story of blue-collar Americans unable to make ends meet who turn to armed robbery in South America to secure the life they feel they deserve. This one also boasts an impressive cast including James Brolin, Cleavon Little, Anthony Quinn, James Coburn, Ernest Borgnine, Lindsay Wagner and Bruce Davison. 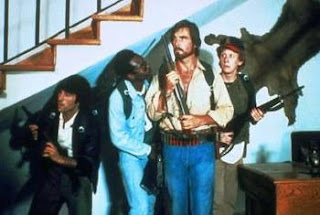 It's ridiculous and dumb as hell, but sometimes sublimely so. It doesn't work, but at least it's fun. 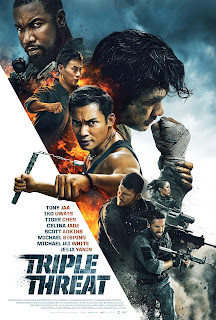 The other flick catching my eye this episode is Jessie V. Johnson's Triple Threat featuring a kick-ass cast from all your favorite martial arts straight to video action movies. Johnson himself makes a lot of this kind of fare, but this time he's gone so big he's hit the big screen. I've not yet seen Triple Threat, but I fuckin want to. Iko Uwais, Tony Jaa, Scott Adkins, Michael Jai White, Celina Jade, JeeJa Yanin and Tiger Hu Chen is some Expendables-level casting and everything I've seen about it sounds solid. 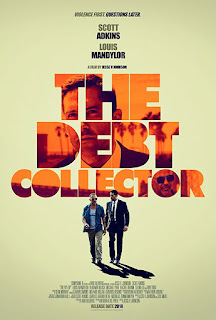 You could/should watch other shit featuring the folks involved if you're curious about this one. Personally I'm a big fan of Johnson's previous Scott Adkins-starring movie The Debt Collector (now available on Netflix). I've watched a bunch of Adkins movies and they're pretty hit or miss - highlights include his decades-later sequels to Jean-Claude Van Damme vehicles like Universal Soldier and Hard Target - but The Debt Collector is easily his most appealing role to date for me. Mostly because somebody had the bright idea to let him be funny and inject a little personality into his performance. He's helped by Louis Mandylor as the other half of the hard-boiled odd couple and fuckin Tony Todd is the bad guy, so it's gotta be worth checking out, right? Pretty perfect, unpretentious, low-brow, low-stakes fun.

Posted by jedidiah ayres at 12:29 PM No comments: 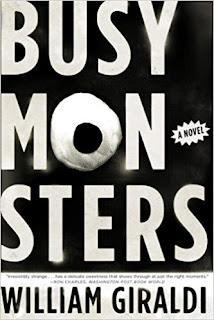 Busy Monsters - William Giraldi - Read this one because I enjoyed Jeremy Saulnier's movie Hold the Dark based on a novel of the same name by Giraldi. Eh... the first fifty pages or so breezed by pretty effortlessly, but as it began to dawn on me I'd have to spend the rest of the book listening to this character talk at me I lost interest. Clever and well-written, but not so much my thing. 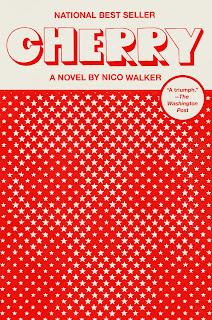 Cherry - Nico Walker - This story of an asshole with barely a soul trying to connect with somebody or something is frequently engaging on a prose level, but seemed to interest me in storylines more than it did the narrator. The structure allows for chapters to be read individually without having to be taken in order of completion which is kinda cool, but in the end it felt like parts outweighed the whole. Subject matter involving drug-fiend lovers turned soldiers and bank-robbers in and out of that order promises something awful on every page, but consistently casual so that it never quite leveled me the way I feel it should. Certainly interested in seeing more from Walker - this one's a mixed bag of talent and subject matter occasionally connecting for good moments, but frequently frustratingly falling short of emotional weight. I hear the Russo Brothers are making a movie show of this one starring Spider-man himself... hmmm. It'll be a departure from the superheroes I guess. 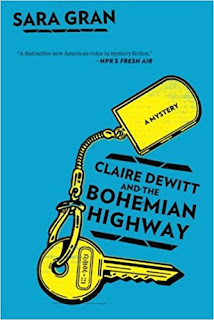 Claire DeWitt & the Bohemian Highway - Sara Gran - Holy crap, I wish Sara Gran would write a book every year or two that I could know was waiting for me when I needed something guaranteed to peel my lid back a bit instead of the probably more lucrative gig of writing television and movie stuffs below her talent level or never to reach fruition. Gran is a formidable talent and DeWitt a singular creation the rare series character I am happy to follow for a few more adventures. 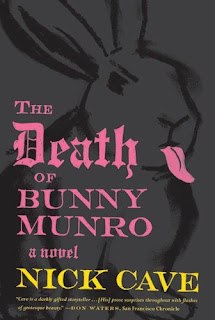 The Death of Bunny Munro - Nick Cave - Good Lord I put off reading this one for some reason - I dunno, probably the title or something - just seemed like it wasn't really aimed at me. But I love Cave's music and his previous novel And the Ass Saw the Angel was great so I always knew I'd get around to it. What I didn't know is that I would read it cover to cover in a single day. That doesn't happen often. Shit, I can't imagine experiencing this one in any other fashion now. Bunny Munro (the character) is such a hideous creation it's hard to imagine coming back day after day for another tidbit, another taste and finishing the book over a few days or weeks. But as a single day's experience it was potent and fucking memorable. You are absolved and forgiven for giving up on it in the first few chapters spent in Munro's head as he piles seamy sexual conquest on top of another, but the latter half of the book tips the scales on Bunny until, believe it or not, we feel for the poor guy (and especially his progeny) before his sad demise. Fuck. Nick Cave is just an all-timer for me. 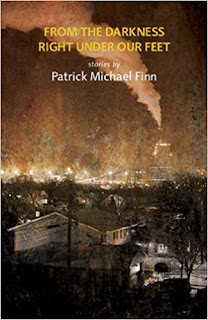 From the Darkness Right Under Our Feet - Patrick Michael Finn - Holy shit. This is a ridiculously strong collection of short fiction about blue collar problems. It starts off strong and just keeps topping itself with human experience and pain that electrifies rather than depresses you. So absolutely my shit I'm embarrassed to admit it - I feel so exposed letting you know. Please seek it out and help make Finn a household name. 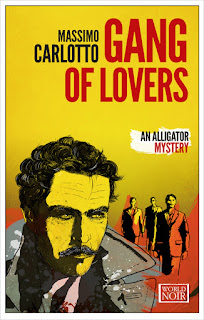 Gang of Lovers - Massimo Carlotto - A joint venture between Carlotto's two series - The Alligator series and his Giorgio Pellegrini chronicles. Pitting the two against each other was a stroke of inevitable genius and I won't spoil the outcome even though a simple Google search reveals which series has subsequent titles. Let's just say Pellegrini is a singular creation and without a doubt my favorite between the two. If you haven't read The Goodbye Kiss and its sequel At the End of a Dull Day fucking please get on that shit as they are hardcore hardboiled and so rewarding. 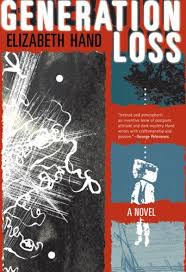 Generation Loss - Elizabeth Hand - A photographer who made a reputation capturing the filth and fury of the late 70s bleeding into the 80s punk art scene (her part was photo-documentarian as opposed to the music or drug cultures) is called upon to create a portrait in pictures and words of her own hero and inspiration and is inadvertently drawn into the darkness of her subject's last days and death and left to solve the mystery which will deconstruct her own life. The first couple of chapters of Hand's series-launching Cass Neary title are print-form amphetamines with a narrative style as propulsive and addicting as the substances her characters ingest. Pretty soon the action slows down to a more 'normal'/acceptable publishing pace and it's fine. It's better than fine actually, but it's less than the opening quarter lead me to believe it could be.

The Good Son - You-Jeong Jeong - Hey, lookit I reviewed this one for the Los Angeles Review of Books! 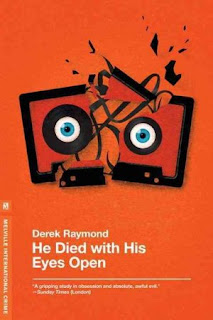 He Died With His Eyes Open - Derek Raymond - I love this series. So grim and pitiless. So violent and having of heart. More like this please, world. 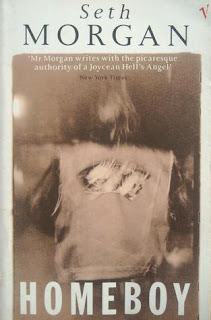 Homeboy - Seth Morgan - Nearly thirty years late to the party, but holy shit is Morgan's debut novel full of promise! I can't wait to dig in to the body of work that---- what?!? He died right after this one was published? Fuck. Welp, this was an amazing book that at least I didn't have to live through the disappointment that lackluster follow-ups would've created. Shit, though. This book was amazing. 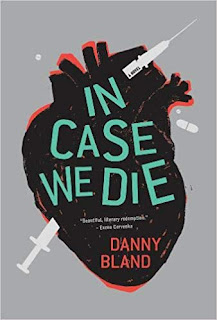 In Case We Die - Danny Bland - File this one under "absolutely my shit" and just sign me up for whatever else is next from Bland. Yes, qualifies as crime fiction with many an illicit/illegal thrill to be had, but not really a classic example of what people who read thrillers want. It's so much more. Heartbreaker, heart-acher. Loved it. 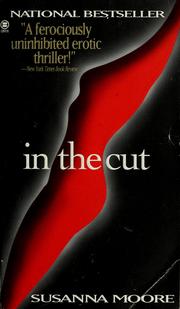 In the Cut - Susanna Moore - Picked this one up on a whim having been in the mood to revisit Jane Campion's feature film adaptation for a bit. What I found the book to be was certainly a different experience than the film. but holy moley am I glad I had it. The ending especially is dynamite. I should try another Moore - anybody got a suggestion?
Posted by jedidiah ayres at 7:56 AM No comments: