The Road to Nowhere 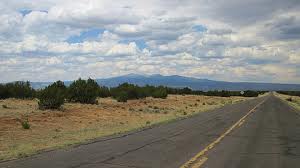 Patrick Shawn Bagley writes fiction, long and short as well as poetry. Further he teaches fiction writing and strikes me from afar as one of those professors I would have wanted to get if I'd ever gone for school learnin. His prose is strong and clear, lyrical, but peppered with well placed obscenities and folksy slang that make me wonder who speaks that way in Maine? PSB is this week's contributor to Hardboiled Wonderland's Narrative Music series.


The Road to Nowhere

It’s a hard-boiled white trash bedtime story, like a Daniel Woodrell novel set to music. It’s an ode to the kind of love that’s born of desperation and inevitability. I’m talking about Robert Earl Keen’s “The Road Goes on Forever.” Along with “Folsom Prison Blues,” “Copperhead Road,” and some of those down-and-dirty old bluegrass tunes, “The Road Goes on Forever” is part of what I consider required listening for anybody who reads or writes country noir.

It’s the story of Sherry and Sonny, stuck in a small town where everybody knew them. Knew their families, knew how they lived. Knew how they’d end up. They were trapped by the low expectations of others. Sherry worked at the only bar in town, serving drinks and trying to be just friendly enough for a decent tip without getting her ass grabbed. Nights off, she and her friends hung out down by the river, thinking that when the beery cigarette haze faded out the next morning things might be different. She knew better. This was Sherry’s life: taking shit at work; taking shit at home; TV, beer, maybe a little pot; getting laid when she felt like it, but most of the guys around there were fuckin’ losers.

Sonny kept to himself. In his late twenties, he was a little too old for Sherry’s crowd and his own friends had left him behind—either moved away or settled down to family life. Sonny should’ve done one or the other, too. Senior year of high school, he’d taken a shot at getting into the Navy, figured it was as good a way out as any. When he flunked the test, his family sang a chorus of We Told You. So he stayed at home and peddled weed until the sheriff popped him one night. Sonny did his time and came back to town. Where the hell else did he have to go? Jobs were scarce and the few places hiring didn’t want to take on a felon. Pretty soon Sonny was selling nickel bags again.

You know damn well they’d seen each other before that night. Sonny wanted Sherry, but figured she’d never go for a guy like him. Sherry worried her friends might say Sonny was too old. Still, there they were—watching each other. Sonny was shooting a little eight-ball, killing time before meeting his supplier. Sherry brought a beer and a shot to an out-of-town lardass who’d been hitting on her half the night. When she bent down to set his drinks on the table, the bastard slid his hand right up inside her skirt.

Sherry jumped back, spilling the guy’s bourbon. Sonny was already crossing the floor. When the fat man made another grab for Sherry, Sonny whipped a cue stick across his face. Even over the George Jones song on the jukebox, you could hear that stranger’s jaw break. The son of a bitch hit the planks and stayed there. Sonny turned away, shoved a buck in Sherry’s tip jar on his way out. Sherry decided she’d had enough of that place, that town, the whole damned life. Tossing her apron over the bar, she ran after Sonny.

They took his pickup down to Miami Beach, grabbed a motel room and some booze and holed up there until the money ran out. That was the moment when they could have gone into the straight life. They had a choice. You’d think so, wouldn’t you? But, as Sophie Littlefield reminded me a while back, “motivations are worked into the soul like dirt caked into calluses.” Sometimes escape is impossible because you just don’t know how to be any other way.

So Sonny hooked up with this guy he’d known in the joint. A couple nights later, Sherry drove Sonny to a derelict house in the shitty part of town. She kept the engine running while Sonny went inside with a briefcase full of money to make a buy from some Cuban refugees. Maybe it was a setup from the start. Maybe Sonny’s friend was a rat. Maybe somebody Sonny didn’t even know had a beef with the Cubans and decided to drop a dime. However it happened, the cops showed up. Soon as Sherry spotted the first cruiser, she drove around to the back.

The Cubans took off with their stuff. Sonny grabbed the cash and busted out a bathroom window. He hit the alley running, but one of the detectives was already there. Sonny was on the ground and handcuffed when Sherry came along and put a .410 slug in the back of the cop’s head. They jumped in the truck and hauled ass back to the motel.

Sonny knew the cops would find him. He’d left his prints all over that house. He was going down, but Sherry didn’t have to go with him. Sonny gave Sherry the money, told her if questioned to say the whole thing was his doing. Sherry stood there and “watched him as his tail lights disappeared around the bend.”

Six months later, Sherry was back in her home town. She hung out in the same old places, drove the same gray streets. Only this time she cruised around in a new Mercedes.

And Sonny? He went down on a murder rap for that cop, got a trip to the chair.

It didn’t have to happen that way.

It was always going to happen that way.

“The road goes on forever and the party never ends…”

Patrick Shawn Bagley’s stories of rural crime have appeared in Crimespree, Spinetingler, Thrilling Detective, The Iconoclast and the anthology Uncage Me (Bleak House Books). He lives on a dead-end dirt road in a small Maine town.

“The Road Goes on Forever” originally appeared on Robert Earl Keen’s 1989 album West Textures. There’s a more kick-ass version on #2 Live Diner (1996). The Highwaymen (Johnny Cash, Waylon Jennings, Kris Kristofferson and Willie Nelson) covered it in 1995, but you can skip that one. Joe Ely’s 2002 cover is cool, though.
Posted by jedidiah ayres at 10:50 AM

Another one new to me. Sounds good. I'll check it out.

Great choice for a song to write about.

I know the tune from the Highwaymen, and liked it but never thought of the underlying story. It's just so bouncy and fun. I'll have to track down a couple of other versions to get a better feel for it. I wonder if Hammerlock's covered it yet.

I've always wondered how Sonny would have turned out if he had passed that test. Probably not much differently, I suppose.

Delbert McClinton's 'When Rita Leaves' tells a good tale, too.

First time around and I loved the premise of the storyline underneath the song. Well done! (Hugs)Indigo