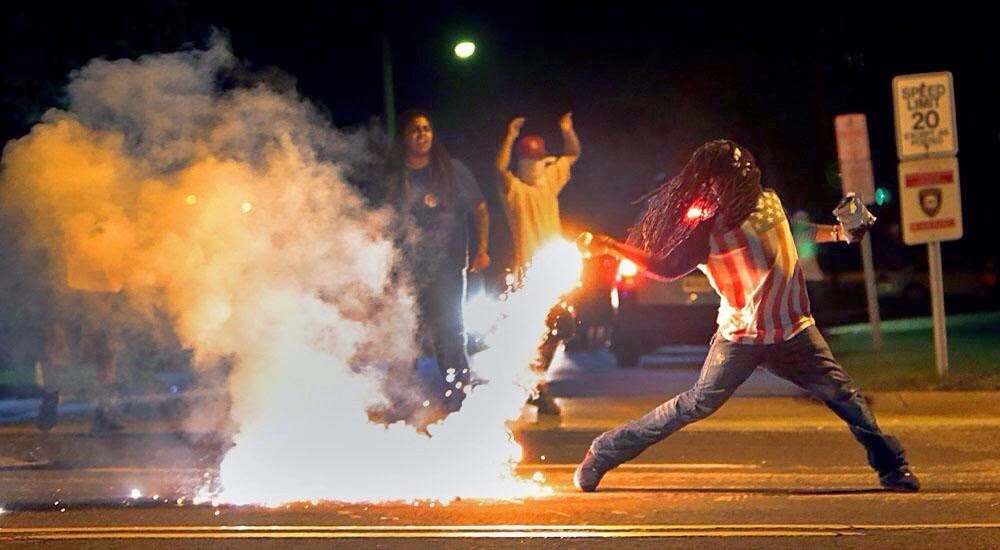 What a fucking week. My home town of St. Louis has been in the national and even international spotlight since the Saturday shooting of Michael Brown, an unarmed teenager, by an unidentified police officer. Fuck. Shit's gone sideways folks. Praying for a better outcome to the escalation of violence and lopsided disbursement of constitutional protections than we've seen historically. It's been a little strange seeing folks that I know and interact with regularly on national news programs and being quoted in major media outlets, but I'd like to publicly thank a few of them for their up front and behind the scenes work for peace and justice in this tragic situation, especially Maria Chappelle-Nadal and Umar Lee. Thank you. 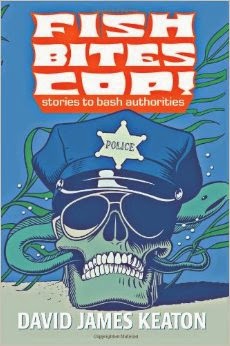 And it has me thinking... could it all be some rogue publicist tackling his job promoting David James Keaton's Fish Bites Cop: Stories to Bash Authorities with a bit too much psychotic enthusiasm? I had the privilege of penning an introduction for that sucker and got a bit carried away (as one is bound to reading Keaton) saying things like "... in a world where Keaton wins: Chaos reigns. Authority crumbles. The emperor's clothing is publicly proclaimed to be, and is demonstrably, non-existent. But that's not the end of it. Not by a long shot. Then the fat fuck is forced to grind his ass on a brass pole for his supper. And, of course, you have to watch. Further, after the ghastly, lewd performance you will fork over his due. And the farce continues." So if this has been some kind of publicity stunt dreamed up to sell a few more copies of a satirical collection of fiction, I shudder at the thought of what we can expect to happen when The Last Projector drops this fall (pre-order that shit right here). 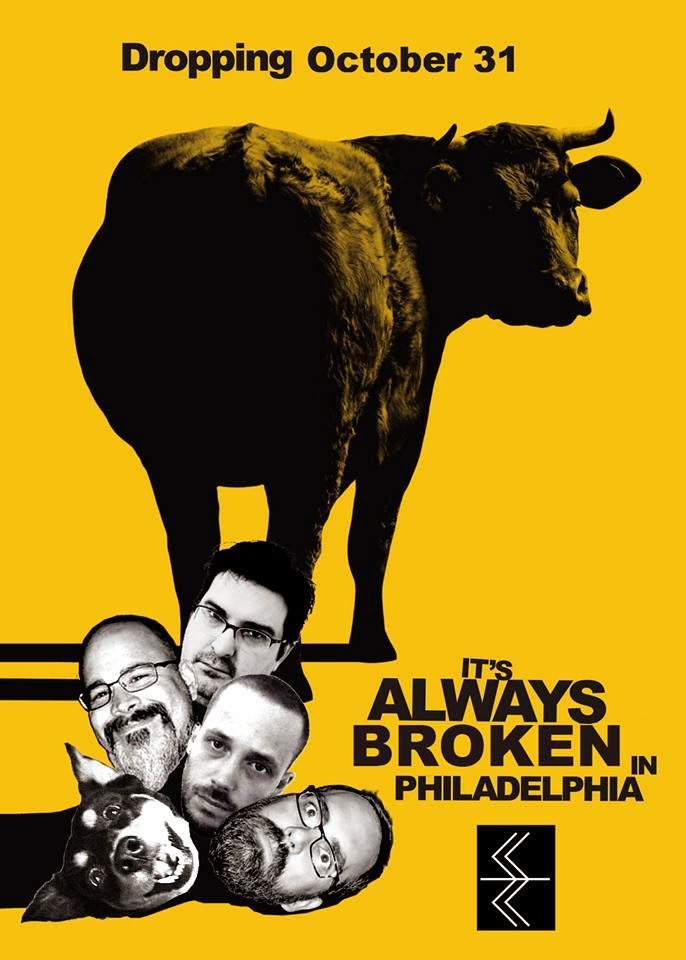 The place I'll be, along with Keaton, when that happens? Philadelphia - Noircon. I'll be there with some fellow Broken River Books brethren like Anthony Neil Smith, J. David Osborne and Michael Kazepis. But this information should not deter you from attending. Lou Boxer puts on a helluva party for folks of our ilk and it's all ilk and folk and hell for three days. See you there. 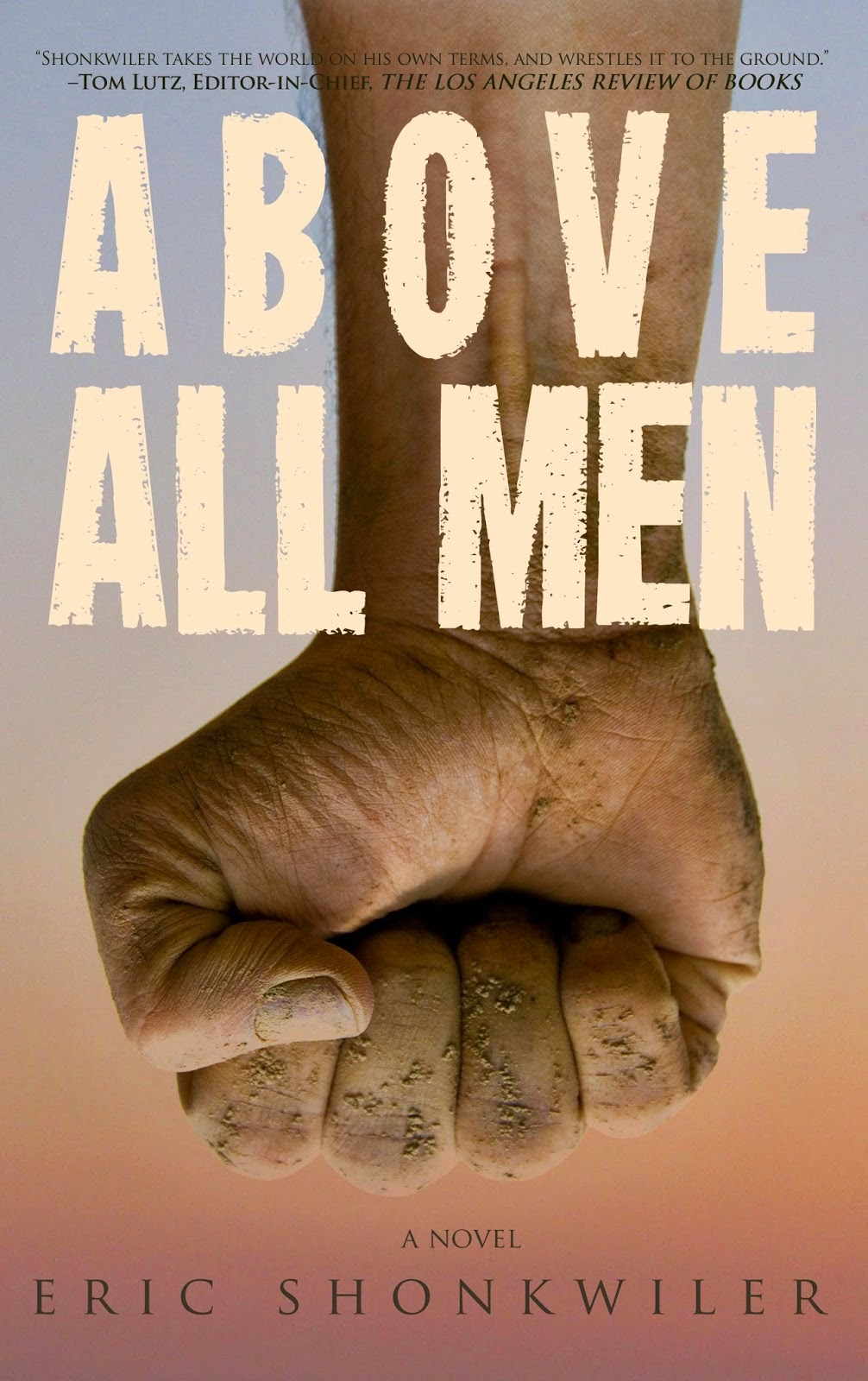 Know where else I'll be? Second Story in Indianapolis September 13th alongside Kyle Minor and Adam Fleming Petty as we join Eric Shonkwiler's big-ass book tour in support of Above All Men. Check out the other dates for Shonkwiler's tour here and see the other great talent who'll be showing up to be part of it. Also, keep checking Hardboiled Wonderland for more details on the upcoming N@B-NWA hosted by Nightbird Books in Fayetteville, Arkansas on October 2nd. Nightbird is a great store (you can even purchase Peckerwood right off their shelves!) and they're putting on a terrific event with myself, Scott Phillips, Jake Hinkson and John Hornor Jacobs. Stay tuned for more on that, then come on by and say 'hi'. 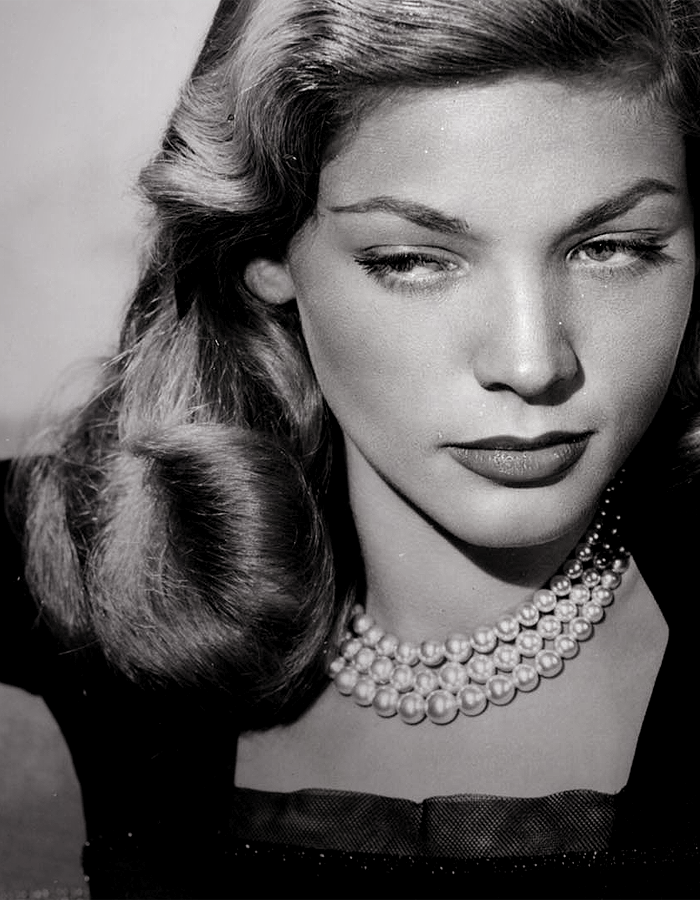 But back to the week we've just had, this fucking week, man. We lost the company of the woman with more sultry sex-power in her gaze than is legal in 48 states. Let's put it this way, if looks could kill, there'd be a buncha paunchy, pasty white folk open-carrying her likeness at Target stores and Chipotle restaurants across the country scaring the hell out of the rest of us. Lauren Bacall, star of HBW favorites Key Largo, Dark Passage, To Have and Have Not and The Big Sleep, died on Tuesday. Married to her frequent co-star Humphrey Bogart, I can't think of a better presence to bounce his ugly mug off of and she held her own against his screen presence, the two of them bolstering the other's performance and command of our attentions, affections and admiration. Not a lot of work in the last decade, but she showed up in Paul Schrader's The Walker and she stole a great episode of The Sopranos as herself getting mugged and punched in the face by Michael Imperioli. Classy lady. 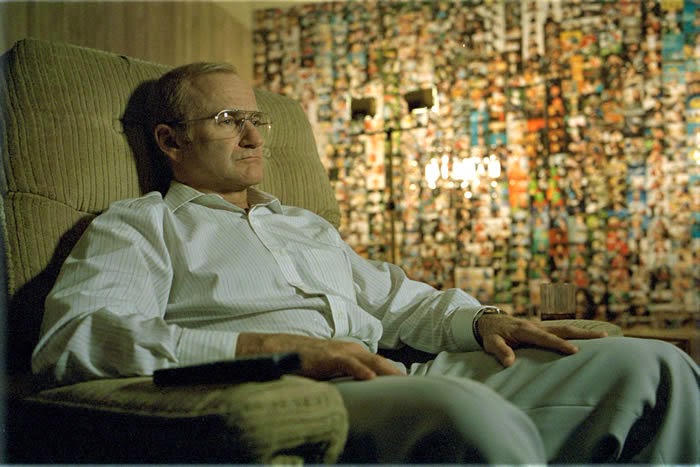 Sunday we lost a funny man, and though he'll be remembered most for his unhinged comedic persona, the stillness in Robin Williams' subdued performance in One Hour Photo was chilling enough to earn an HBW fond farewell. There was a darkness lurking under the surface of many of his funnier film appearances too (Cadillac Man, The Fisher King, World's Greatest Dad, Death to Smoochy - not to mention the creepiest -tho probably unintentionally- Toys - come to mind). Sorry to see you go, sir. I don't want to pretend that I know what was going on in the man's heart and mind, but I'd like to say that if you have never objectively considered the option of suicide... I'm just not sure I can ever fully understand you. Pain, man. It gets painful. If you have, I'm glad you rejected it, but if you're present enough in your own life, I'm guessing it's come up for you. It has for me. 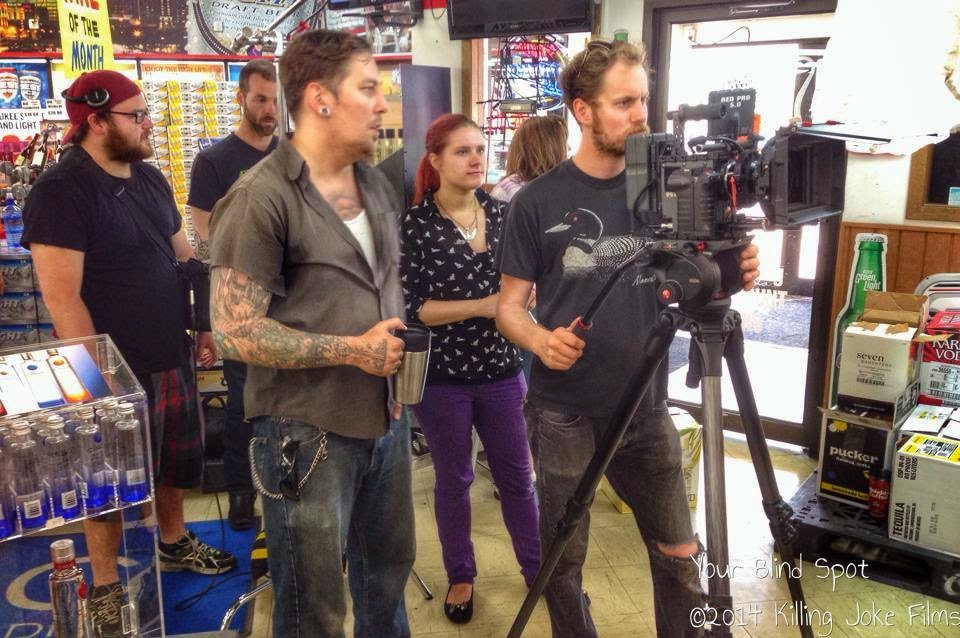 Since backward is the direction for a happy ending to this week's recap, Saturday I had the opportunity to spend the afternoon with Paul von Stoetzel (director of Snuff, Viscosity, and someday soon Hogdoggin') at local breweries talking about films and books and a whole lotta you good guys and gals. We talked too about Your Blind Spot, his new short film from an original screenplay by Frank Wheeler Jr. Pretty friggin excited to see it. The timing ought to be good for cross-promoting the film and Frank's terrific new book The Good Life. Get it. And keep a lookout for the film, you know I'll be all over it when it's viewable somewheres.
Posted by jedidiah ayres at 6:32 PM

I saw THE FISHER KING when it was first released to video. Williams's performance was so painful I've never been able to bring myself to watch it again, and I've seen SAVING PRIVATE RYAN half a dozen times. I don't like to use the word "heartbreaking," but that truly was.