Since we're doing that whole favorites of the decade series here this month (so far: 150-200, 201-250, 251-300), I'm posting my usual top 10 of the year piece at The Daily Grindhouse and you should go read that shit now. All my top picks from 2019 will be included in the favorites of the decade pieces, but for somebody all caught up on everything else who just wants to know about very recent shit - get thee to the Grindhouse and check out these Honorable Mentions (picks 11-20 in alphabetical order) below. 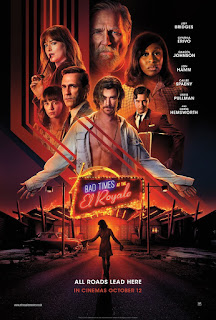 Bad Times at the El Royale - Drew Goddard - The one about that cast of colorful characters hanging out in that big old building, brought together for a common purpose and they all have secrets and there are secret passageways and it's got a lot of fun camera work and precise blocking and speaking and it's got cleverness and big, big surprises that's not Knives Out. 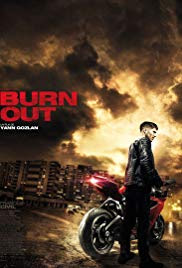 Burn Out - Yann Gozlan - François Civilabout plays a motorcycle racer about to turn pro who puts his skills to use as a drug-runner in order to pay off a friend's mortal debt. The riding footage is sharp and feels dangerous without feeling too heightened - it feels tethered to a familiar reality and the climactic trip through a riot is schweet. 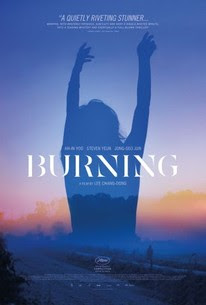 Burning - Lee Chang-dong - The crime element in this one, like just about every other element, is slippery and elliptical and haunting like a motherfucker. Honestly I didn't know how much I was digging it until it was over. It takes its damn time going anywhere, but it casts a spell and if you're susceptible to... I dunno, beauty? Mystery? Chronic masturbators, arsonists, stabbings or ghost cats, I think this one is for you. Based on a story by Haruki Murakami called Barn Burning (which apparently translates to cock-blocked by that guy from The Walking Dead). 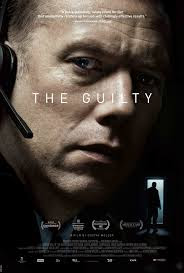 The Guilty - Gustav Möller - Jakob Cedergren is Aager a Copenhagen cop riding out what might be the end of his career after a major fuck up. He's been demoted to emergency call dispatcher until the disciplinary inquest into him passes judgement and he most likely will find himself out of a job. Near the end of what might be his final shift he takes a call from a panicked woman who says she's been kidnapped and is in the trunk of a car and what follows is a pretty engaging thriller that never leaves the call center. Aager first demonstrates professionalism in keeping the woman calm while extracting important details constructing a helpful narrative of her situation while he dispatches various officers and deduces probable destinations the car might be headed. He also demonstrates real concern and compassion that rekindles some small part of him that probably drove him into the role of public servant and protector in the first place. Finally he demonstrates an obsessive streak and drive to get the job done, refusing to go home at the end of his shift and pledging to ride out the crisis despite multiple warnings that he has become too emotionally involved to be the best help the situation deserves. Big ups to Möller and co-writer Emil Nygaard Albertsen for constructing a tense thriller procedural that allows for plenty of character reveal along with the plot and of course to Cedergren on whose shoulders the whole thing succeeds or fails. 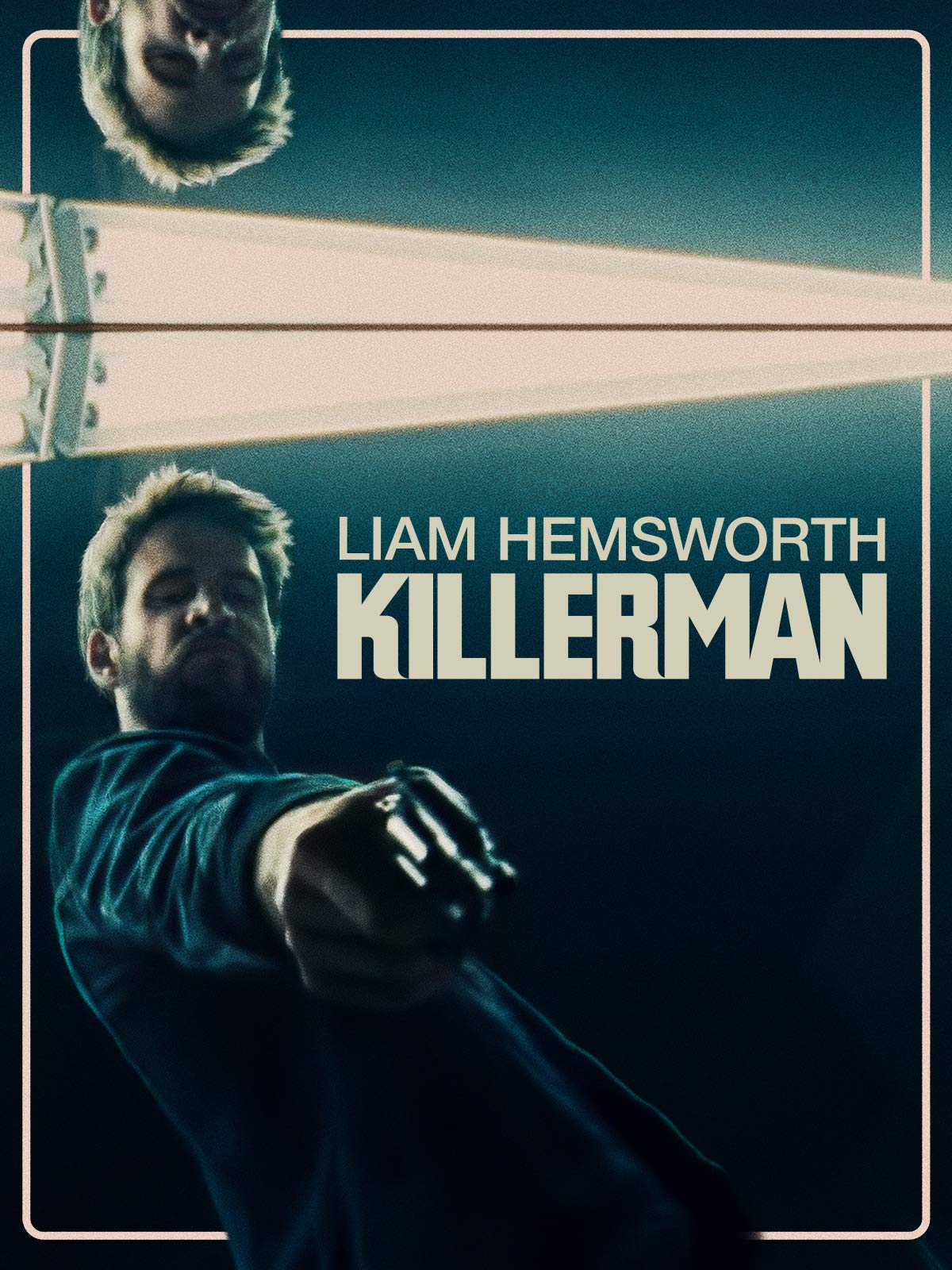 Killerman - Malik Bader - The first ten minutes of Killerman where we follow Chris Hemsworth's Moe on his rounds at his job laundering cash had me thinking I might've found my favorite unheralded movie of the year. It just had the feel of the type of street level shadow economy crime and stakes that I could  embrace easily and enthusiastically. After the inevitable happens - shit goes sideways hard and fast at the ass end of a bad decision - the amnesia element dropped and so did my expectations for the rest of the film. Moe sustains a head injury resulting from a violence from police looking to steal from him that causes him to lose his identity - an entirely unnecessary twist to the everybody wants a piece of him thriller I was already invested in. The movie I was invested in, turns out, was only half the movie Bader was intent on making though and in the end the amnesia has as fine a pay-off as I could have hoped for - it just threw me off there for a while in the middle. Still - this flick has got a lot more going for it than against including Zlatko Burić! I do have hopes Bader will make a bonafide crime classic one of these days. 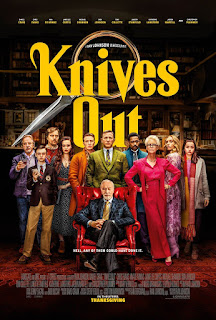 Knives Out - Rian Johnson - The one about that cast of colorful characters hanging out in that big old building, brought together for a common purpose and they all have secrets and there are secret passageways and it's got a lot of fun camera work and precise blocking and speaking and it's got cleverness and big, big surprises that's not Bad Times at the El Royale. I'm happy for Rian Johnson's success and doubly glad he's not trapped inside the Disney franchise machinery and it's wonderful that this original script made so much damn money, but there are a so many more projects I'd rather have him doing than a Benoit Blanc series with Daniel Craig. Agathe Christie pastiche is something I need only in small doses (honestly, I'd rather see Craig do another Joe Bang from Logan Lucky movie or two). Still... this was fun. 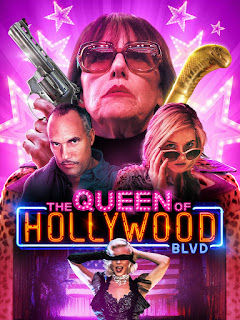 The Queen of Hollywood Blvd. - Orson Oblowitz - A few decades ago Mary was a fresh off the bus Hollywood hopeful who didn't ever make it as an actress, but neither did she pack it in and retreat back home. Instead she dug in and made something else for herself as owner/operator of a seedy Los Angeles strip club of which she is very personally proud. She has maintained the place and operated it with strength of character and will, but she got her start with a little help, in the form of a large loan, from some organised crime types, and as she is planning her 60th birthday celebration she finds that her debt has been called in. In lieu of hard cash she will be required to turn over her beloved club, a price she is unwilling to pay. Rosemary Hochschild plays Queen Mary a stoic hardboiled bad ass with a handful of crucial soft spots for her son (writer/director Oblowitz - Hochschild's actual son) her girls who are just like she used to be, and for the establishment itself, an alternate to packing it in and going back from where they came for many never-quite-weres. As it becomes increasingly clear that she will not back down and hand over what's hers and the negotiations include escalating levels of violence the whole affair begins to feel like a birthday slash death day celebration where the ultimate dignity might just be going out on her own terms. Full of swagger and featuring a steely stylized central performance it feels like a spiritual sibling of The Killing of a Chinese Bookie and I dug it a bunch. Very worth noting the final performance by Michael Parks and a good role for Roger Guenveur Smith too as the heaviest heavy. 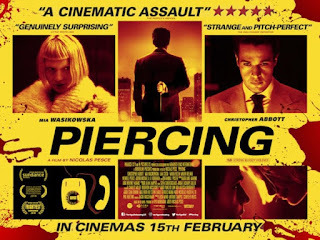 Piercing - Nicolas Pesce - Christopher Abbott plays a young father who cooks up a scheme with the help of his wife (Laia Costa) to murder a call girl in order to keep loved ones safe from what is apparently an overwhelming urge of his. Mia Wasikowska plays the intended victim and the film plays out mostly in the hotel room where the event is supposed to take place. Piercing is a fucking sick movie played very effectively for laughs. My favorite guffaw-moments came during the montage of Abbott rehearsing the murder, dismemberment and disposal of evidence. The whole sequence is just him pantomiming to wonderful editing and sound design that ought to illicit gasps and giggles in more or less equal proportions (reminded me of nothing else so much as Alfred Hitchcock at his sickest and funniest). Of course nothing goes as planned and fans of Takashi Miike's Audition will find a lot of similarities and could probably guess they both came from books by Ryû Murakami. 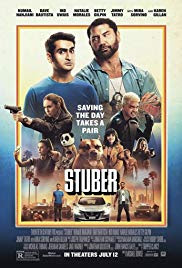 Stuber - Michael Dowse - Kumail Nanjiani is the titular Stu - a part time Uber driver trying to make ends meet and Dave Bautista is the hardcharging police detective Vic who, months after the murder of his partner gets a break in the case on the day he is recovering from lasik surgery and can't see well enough to... pretty much anything, but certainly he's in no shape to drive. Luckily his daughter has pre-programmed his phone to call him an Uber to get to an important event that night. Stu is shackled sometimes literally to Vic as he follows the trail of the bad guy who killed his partner (Iko Uwais). This one hits all the usual hardboiled cop beats, but with comic twists (for instance the obligatory strip club scene is in an all male revue club that Vic is too blind to notice "Lot of security here" he notes as they walk around backstage among all the muscle bound guys and the climactic shootout takes place in a Siracha factory blinding just about everybody) and along the way themes of masculinity in crisis and trying to protect your loved ones vs. just being an asshole are explored, but mostly breezy laughs are had amidst the refreshingly R-rated violence. Thank fuck. I don't know why this one bombed and why it was critically dismissed (I even saw it included in a worst movies of the year list) because it's a great throw-back to the crime comedies I grew up loving (48 Hours, Running Scared, Midnight Run, Red Heat, The Hard Way etc.) and I was loving it all the way. 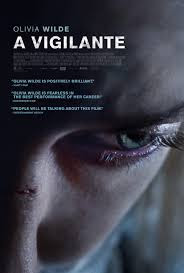 A Vigilante - Sarah Daggar-Nickson - Olivia Wilde as a battered woman whose mission is to help other victims of domestic violence escape. Cool idea that sounds like a comic book premise (like The A-Team meets You Were Never Really Here), but gets a fair dramatic shake with a very engaged performance from Wilde at its core. She gets to be legitimately badass and formidable one moment and loosing her shit, shaking with tears in terror the next. She's not selling any cool vigilante lifestyle, but working out her recovery with fear and trembling and bold moves. What after all does she have left to loose? Definitely looking for what's next from Daggar-Nickson.
Posted by jedidiah ayres at 3:39 PM