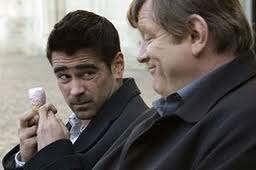 "Bruge is a shithole." "Bruge is not a shithole." This succinctly wraps up the arguments of the two hitmen "cooling off" in Martin McDonagh's profane, comedic thriller from last year, In Bruge. It was the freshest blast of foul-mouths since Deadwood wrapped and possibly the thing Colin Farrel can later thank for saving his career, (let's hope London Boulevard - based on Ken Bruen's book - based on Billy Wilder's Sunset Boulevard - lives up to the promise of its considerable credits). In the story, Ray and Ken, (Farrell and the always great Brendan Gleeson) are hitmen in the employ of Harry, (Ralph Fiennes - funny - who knew?), a gangster with a strict and odd moral code. After a big job is pulled with some serious complications, Ray and Ken are sent to the titular town to lay low until word comes from Harry. Ken is pleased with the little tourist town and the chance to sight-see while Ray hates every moment spent in cathedrals, canals and cobble stone streets. McDonagh said he'd come up with the opening dialogue, "Bruge is a shithole...etc." based on his own experience there years ago and does a fine job rounding out the argument so both sides seem reasonable. I enjoyed the flick and now know a little something about Bruge, (it's in Belgium). Last week, I watched the curiosity, JCVD, in which The Muscles from Brussels, Mr. Jean-Claude Van Damme plays himself in a cheeky send up/plea for props. I was expecting a rather Being John Malkovich experience or the equivalent of an extended Entourage cameo where the actor has the opportunity to puncture their personality a bit, but JCVD wasn't going to be either, (quite). Instead, after an amusing, if rote, opening in which JC is introduced as an aging B-movie star with a career problem, image problem, drug problem and domestic problem, he is placed into a classic situation for an action hero, in this case the middle of a bank heist. I don't want to go too far into the plot because there are some nice moments I might ruin. Something struck me, though. Numerous times the locals refer to Belgium as "a shithole" to no one's dissent. I come from the mid-west and hear locals deride their homeland all the time, (let alone all you smug coastal dwellers and foreigners with your hygiene, fancy coffee drinks, statues and such), and it always bothers me. I wonder how much tourism is being scared up for Belgium from these films. Do folks step off the train now and begin to argue the shithole thing immediately? I'd like to see Belgium some time. Could it really be all that bad? (For further fun from McDonagh and Gleeson, hunt down the aprox. 30 minute short Six Shooter. It rocks.)
Posted by jedidiah ayres at 5:37 PM

Thanks for the review. I've been wanting to check this film out.

In Bruge friggin rocks. JCVD is not an evangelical social disease.

Hi, i'm British/Brazilian and i've lived for the most of my life in Belgium, and yes this place is an absolute Shithole. Every place has it's ups and downs. But MY GOODNESS, this place is a joke, people are xenophobic, acidic to the CORE and tear down your fun. i've visited like 16 countries, and every place has a certain atmosphere, and it's like they have become addicted to depression & gloom, people always seem to tear your fun down. it seems like everything you do is 'Schaamtelijk'(shameful) or 'Marginaal'(marginal), 2 words you hear often here. And i love being shameless & i don't like bitching about everything and nothing. I'm so happy! i'm moving to London in a month. It's funny tho, He thinks Bruges is a shithole,when that's one of the least depressing parts of the country by a LONG SHOT. seriously...