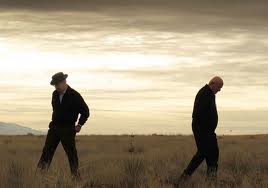 Cruising the Twitters the other day I caught Brian Lindenmuth remarking that his favorite character on Breaking Bad was Jonathan Banks' Mike the PI and having just finished watching season three on DVD, I can find no fault with that choice - a testament to the strength of the writing, acting and production in general that among a heavyweight cast of amazing characters somebody can take a "small" role and make it shine. Myself, I might pick Giancarlo Esposito's Gus Fring. I've been a big fan of Esposito's since I saw him ooze menace in Boaz Yakin's Fresh (back in what '94?) Throw in Dean Norris and Bob Odenkirk's supporting work and geez is it any wonder it's my favorite show on the TVs right now? Gawsh, even Anna Gunn got better, (less irritating) things to do this season - I LOVE that she's throwing herself into the business - it's the reaction I've been waiting for from a compromised spouse for too long (The Shield, The Sopranos, Dexter - had your chances). Back to Banks though, Brian said that Mike the PI recalled to him the character Joe Sarno played by James Caan in Christopher McQuarrie's superb Way of the Gun (speaking of strong character ensembles), and it got me thinking - I just watched Caan in a pretty decent recent crime flick Middle Men (uneven for sure, but I didn't want my two hours back afterward) - and I ought to put together a quick list of my favorite James Caan crime films that aren't y'know, The Godfather. So, here you go in no particular order: 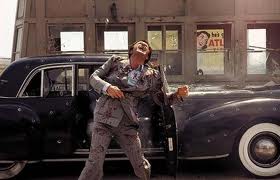 
Speaking of good stuffs on TV, I was pleasantly surprised by Southland on DVD. I dunno, ads made it look like the typical craptastic, networkerrific body of the week procedural, but turns out it's a character ensemble working with pretty decent scripts that allow for some of that weird street shit that you want from cop shows while not becoming all about 'solving crimes'. Far from blowing me away, but far better than I was expecting, I'm hoping a second season really solidifies this show. 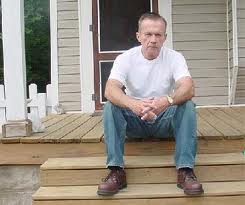 Well, Jed, you may ask, what is blowing you away these days? To which I'd reply, Pete Dexter's memoir in disguise Spooner and of course, Donald Ray Pollock's The Devil All the Time. And you'd say  'well duh' and I'd say 'hey you asked' and you'd say something trite and I'd karate chop you in the neck. Seriously, this is the book of the year far as I can tell, and you have a need to experience it. You can read my review of it at Ransom Notes. St. Louis people, if you don't show up at Subterranean Books next week, July 20 for Mr. Pollock's event, you're dead to me. The rest of you that can't make it here would do well to aim for September 10 in Corydon, IN. where he'll be appearing with Scott Phillips, Kyle Minor and myself for the release of Frank Bill's Crimes in Southern Indiana. I see lots of names appearing on the might-be-there list - Matthew McBride, Chad Eagleton, Aaron Michael Morales, Matthew C. Funk, Richard Thomas, Fred Venturini, Cameron Ashley and Daniel O'Shea. That's gonna be a party. 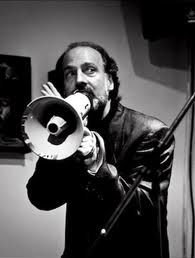 Also, don't forget N@B on August 6, 7pm at Meshuggah Cafe. Scott's new book The Adjustment will be available, as will Noir at the Bar the book! Also, Jesus Angel Garcia with badbadbad, Jane Bradley with You Believers and David Cirillo. What a mix! What an event! What a country!

So, in case you're keeping track, the anthologies you can find me pushing especially hard the rest of the year are Noir at the Bar, D*CKED, Surreal South '11 and Crime Factory - which just got a little mention in PW. Guess whose story they found 'revolting?' Yup, Greg Bardsley's. Can Not Wait. Speaking of the Bards, he and Kieran Shea are working awful hard on D*CKED and even getting me off my substantial ass to contribute (just a little). Anyhow, I re-read Scott Phillips', Hilary Davidson's, Cameron Ashley's, Harry Hunsicker's and Eric Beetner's pieces the other night and really enjoyed them... I dunno, I got to thinking of setting up a special D*CKED at the Bar event for Bouchercon week. Any of you contributor's gonna be in town and wanna do that? Lemme know.
Posted by jedidiah ayres at 12:17 PM

Last year, my gf almost convinced me that Breaking Bad was like Weeds but lamer. Since then I saw footage and I find myself strangely attracted. Thanks for the heads up. Always enjoyable.

Wow - I'm sure your girlfriend is a lovely lass, but she's a weeee bit off in that observation. Breaking Bad is kinda the anti-Weeds in that it revels in consequence where Weeds avoids it almost entirely (or did in the first 3 seasons or so... body count has skyrocketed on that show and they're finally getting around to acknowledging that she's the worst parent in the world).

But, yeah, Breaking Bad just gets nastier and darker and shudder... better

I'll be there but I think I'd get stage fright.
BREAKING BAD comes back soon and I can't wait.

Breaking Bad, it doesn't get any better. The wife and I really dig it!

Oh sweet fuckin' crap. D*cked at the Bar? Great. That's just fuckin' great, man. The one time I can't make it....maybe I should just record it.

How much do I love the sound of D*CKED at the Bar? Count me in if you set that up, Jed — I'm planning to be in StL for 4 nights, starting the 14th. (PS to Patti: you would rock the house if you read!)