This Gun For Hire: Roger Donaldson 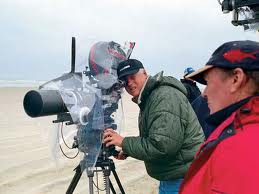 Journeymen, craftsmen and artisans in general hold a rare warm ember in my coal-hard-dark heart. The guys and gals out there doin it for hire, honing their skills over time and with constant, repetitive motion leaving behind a body of work often unappreciated in their own time because it was dismissed as populist, mass media, common - whatever pejorative the snobbish jack-offs of the day assign to work that's eager to please and find an audience.

By necessity, there's a lot of throw-away items in their catalog, but once in a while I like to take a moment to consider them, and today belongs to Roger Donaldson. That's right, the director of Cocktail and The World's Fastest Indian is finally getting his due at the HBW, though neither of those films are making my top-five. And neither are some decent ones like The Bounty, (when you're telling ol' timey seafare -  you can not skimp on the simple pleasures of abundant nudity - something Donaldson knows) Cadillac Man and Thirteen Days (yeah, Roger helps Costner stay out of his own way like I really think Kevin'd like to if more producers and directors would only let him, plus Bruce Greenwood as John Kennedy? I liked it.) But, we're not gonna dwell on turdbags like The Recruit or Dante's Peak either. 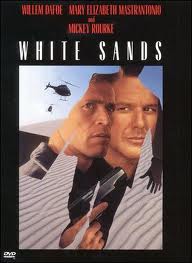 5) White Sands - Honestly, I haven't seen this movie since it was new nearly twenty years ago. Needless to say my tastes have changed some, but some things that haven't like my enjoyment of Mickey Rourke doing damn near anything on screen, my love of crime stories and the strength of the cast - Willem Dafoe, Samuel L. Jackson, M. Emmett Walsh (plus Fred Thompson and Mimi Rogers just kinda hanging around the background). Seem to recall the film's immediate critical dismissing and panning, and true '92 saw some pretty sweet crime flicks (Reservoir Dogs, El Mariachi, Bad Lieutenant, Romper Stomper), but remove yourself twenty years and ask yourself, would you rather put this one on now or the big hits of the day like Lethal Weapon 3 or Passenger 57? 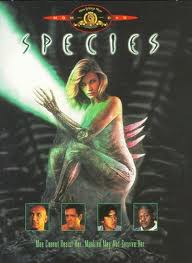 4) Species - Somewhere in the nineties, John Carpenter became a fixture of the eighties (hey, I'll still see anything with his name on it, but for one reason or another, his presence faded somewhere after Memoirs of an Invisible Man). Anyhow, my feeling is that somebody looked up one day and said, where the fuck did Carpenter go? And commissioned a script that would have it all - a hot alien, tough guys, lotsa nudity, blood, sex, dubious science and hey, how about a kick-ass cast? What's Ben Kingsley doing next week? Book him. How about Alfred Molina? No, he only thinks he's busy. Tell him that in this one he'll get tongue-kissed to death by a hot naked chick. Yeah, thought so. Alright, we need Forrest Whittaker and Michael Madsen too, right? Dumb? Yeah, but good, goofy fun. 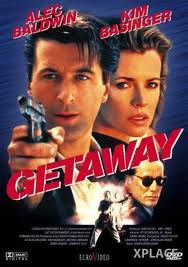 3) The Getaway - What this movie had going against it - the legacy of Steve McQueen and Sam Peckinpah's original blood and dust classic. What this movie had going for it? Blood. Dust. The hardboiled classic by Jim Thompson, (though, not as much in either film as I'd like to see) and Alec Baldwin before his hyper-masculinity was purposely funny. Plus, James Woods, Michael Madsen, David Morse, Jennifer Tilly, Philip Seymour Hoffman and Kim Basinger - far less shy and even a better actress than Ali MacGraw for support. Nothin fancy, just bang for your buck and slick too. I'd take Peckinpah's over this one in a heartbeat, but hey, I enjoyed this plenty. 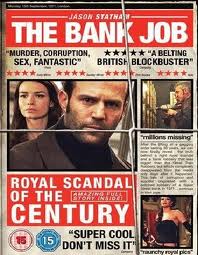 2) The Bank Job - Far more than the sum of it's parts. Not really sure why it worked as well as it did. Not a show-stopping heist flick, not a particularly street-wise gangster epic, not a kick-ass action spectacular and not a richly-detailed dramatic period piece either. Smarter and funnier too than I had any expectations for - a marketing snafu or puzzle, I suspect. Somehow, less than the top of any of it's respective genres, it managed to be competent at each and fill an unlikely void in the flavor spectrum. Not a hard way to spend an afternoon at all. 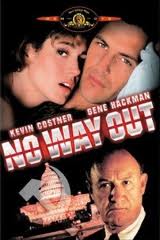 1) No Way Out - The only truly excellent film on the list. You think I'm kidding, don't you? I'm not. Love this film. Love this film. Don't ever like Kevin Costner? Fuck you. This one is pure plot, just a constructed in reverse puzzler that ticks like a clock, and you say the characters are thin? Well, aren't they always in this type of fare? But movie stars (as opposed to capital 'A' actors) are just audience surrogates, inviting us to fill in the sketch on the screen with our own experience, and Costner never did it so well. This one is the standard bearer for thriller film-making, and I'm not ashamed to confess falling hard for every twist, feeling every turn of the ratchet in my nuts and yeah, getting my pulse into dangerous territory.

Labels: This Gun For Hire

White Sands and The Bank Job are good uns.

I liked The Bank Job quite a bit. Solid movie.

Costner: Easy target to hate on if need be, but the guy has been in some good movies.

3000 Miles To Graceland (pure pulp on the screen, and an extra hoot if you know your Elvis Presley and Kurt Russel connections)

No Way Out (you covered that already)

The Untouchables (not that great, but if it's on, I'm watching)

Y'know which one surprised me? Open Range. Have to watch it again to see if it really was good or I ate something bad.