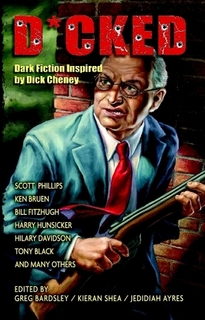 Multiple weeks for the Noir at the Bar anthology on the St. Louis Independent Book Store Alliance best seller list - fuck yes! Thanks everybody. N@B badass Chris La Tray is telling the story behind his contribution to the anthology - Vampires are Pussies - right here. Go read the hell outta that.

You want more? Yeah, you do. That's why D*CKED is now here. The cranky, rattling, colic-y brain-child of Greg Bardsley and Kieran Shea (okay, my name's on there too) has finally busted outta the cellar, stolen a car, picked up a half-dozen runaway hitchhikers, and was last seen shooting rocket-propelled grenades at bunnies out the window while tearing ass for a horizon near you. It's out in the world now and you'll just have to deal with it. Not bad for a fictional character with no pulse, no?

You've heard the pitch right? We asked a handful of creative types to let their twisted inner fabulists off  the leash and do a little free association with the name Dick Cheney. Got a bunch of wild ideas including several that reoccurred in variations (Dick in pop-culture, Dick as vampire or other mythological creature, Dick's correspondence, Dick's sexy secrets etc.) Who came to play? Patricia Abbott, Cameron Ashley, Eric Beetner, Tony Black, Ken Bruen, Jimmy Callaway, Rachel Canon, Hilary Davidson, Jason Duke, Bill Fitzhugh, Matthew C. Funk, Harry Hunsicker, Nancy Lee Philcox, Scott Phillips, Keith Rawson, Mark Richardson, Al Riske, Marcus Sakey and Steve Weddle. Plus, our wordless contributor, artist Owen Smith delivers the goods via the front cover which is worth the measly $9.99 to hold the object in your hands... Yeah, come to think of it, I'm going to order an extra copy just to rip the cover off and frame that shit.

Really, really proud of the fantastic collection of pulp covers that I'm piling in behind these days. Awaiting the Crime Factory anthology with... (breaths into hand)... baited breath.