Robb Olson has reviewed F*ckload of Scotch Tape over at ManArchy Magazine - check it out. There's also a new trailer for it right over this way. Julian Grant is working on a graphic novel version of the movie which I'm looking forward to seeing, and he's casting now for his next feature - another crime flick - to be shot in Chicago in the fall. This one's called Sweet Leaf and it's about some small-time losers in big time trouble putting together a heist in order to pay off some drug debt. Things don't go well. Julian's calling it a cross between Drugstore Cowboy and a Spaghetti Western. Apparently nobody sings. But hey, if I were a hard-working actor in the Chicago area, I'd be trying to get on board. 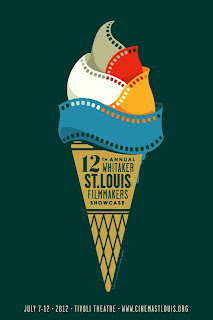 If you're in St. Louis this summer, you can check out Paul von Stoetzel's terrific short film Viscosity at the St. Louis Film Maker's Showcase on July 11. I hear the author of the short story may be in attendance. Actually, I can assure you he will be. I'm really looking forward to being able to experience this one with an audience.

Shit ton of Ransom Notes links to feed you now. S.G. Browne's comic crime novel Lucky Bastard about a PI who's hired to find a politician's stolen luck inspired a quick list of books and films revolving around luck. Read the piece. Sad that the David Milch/Michael Mann show Luck didn't make the list. Not having seen it, I can't comment on its cancellation, but damn that one sounded like a winner. One film that did make the list is Juan Carlos Fresnadillo's Intacto, which if you ain't checked out yet, you can consider these your marching orders - go see that shit.

No, wait. Come back. Consider these your marching orders - go get Tom Piccirilli's The Last Kind Words. It's a tough-headed, wounded-hearted crime novel that's gonna mess you up. Did you read last year's Every Shallow Cut or hell, James Ellroy's My Dark Places? You know that weirdly confessional tone - that one that makes you think you're getting waaaay too much personal information from (or insight into) the author. This one? Same kind thing. Just... devastating. But manages to be kick-ass too. Neat trick. Read the review.

Y'know what? Just finish reading here before you march off anywhere, 'cause Don Winslow's The Kings of Cool - his prequel to Savages is going down easy at a bookstore near you. Hell, it would go well with any kind of drink you'd care to mix it with. It was late and I was a bit loopy when I wrote this piece, but I think you'll get the basic point - read the shit out of this book before or after Oliver Stone's Savages fux up a multiplex near you.
Posted by jedidiah ayres at 10:37 AM

Labels: FLOST, Patting myself on the back, Ransom Notes, Review