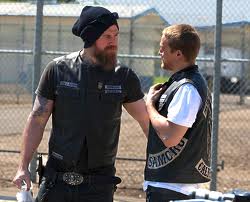 I'm settling into the fourth season of Sons of Anarchy on DVD, and I gotta say - after the giggle-fits the entire Brady Bunch goes to Hawaii-esque Ireland trip of season three sent me into - this show is finally knuckling down and tapping into the promise of its premise. 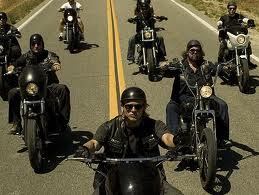 I admire the pace Kurt Sutter and Co. have stuck to with the Hamlet-on-Bikes aspect, letting it simmer for a few seasons, but it looks like that particular truck is about to go up a gear or two, and it's good and about time. I also dig the nastiness that they're finally letting these guys stew in. The show has always had wild, brutal shit going on, but all that counts for dick if you're pulling your punches with character. Seems to me they've let the core shittiness of these guys out of the box - and I applaud that. Hear me television execs and film producers, the fact that I don't like your characters, as people, does not mean that I will not like your product, but if you insist on playing cute with your audience, cushioning the impact of your badass's badassery in an attempt to make them more sympathetic, you're going to lose me. The Shield, The Sopranos, Deadwood, Brotherhood, Boardwalk Empire - some of my favorite all-time shows - not a likable character in the cast. Compelling characters. Complex characters. Human characters. But pretty much assholes across the board. I'm a big boy. I can take it. I appreciate it when you stop lying to me about what teddy bears these fuckers really are at heart. 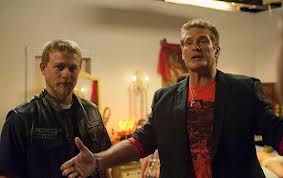 Something that continues to bug me? How uptight and squeamish these outlaws are about running drugs... when they're totally fine with running guns. The fuck? On the other hand, I'm loving the supporting characters - Theo Rossi, Dayton Callie, Ryan Hurst, Emilio Rivera, and season guest stars like Ray McKinnon, Danny Trejo, Tom Arnold and fuckin David Hasselhoff - the Hoff in my favorite supporting role since Stephen King in season 3. Also nice to see Sutter throw his Shield soldiers a bone - David Rees Snell, Kenneth Johnson, Benito Martinez, and I still think Jay Karnes had one of the best turns in season 1... They've got a good thing going here, let's hope they follow through.

Speaking of stuff that executives get all chicken shit about, I just caught Morten Tyldum's Headhunters, and one of its chief pleasures was going to those places big productions just won't go to. I'm looking at you, outhouse sequence, and you, dog-fight. In fact, the visual of Aksel Hennie driving a stolen tractor down a twisty, backwood, highway, covered in shit with a dead dog impaled on prong attached to the front is... just about the greatest thing I've seen this month. (Incidentally, how the hell did Rian Johnson and Bruce Willis get away with doing what they did in Looper? So glad that happened in a biggish Hollywood production and with a huge star. Damn, that was cold.) If you, like me, enjoy a shit gets out of hand crime story, this one's for you. I'll add it to a short list of crime flicks that caught me off guard by how much I enjoyed them this year along with Fred Cavaye's Point Blank, Jill Sprecher's Thin Ice and Daniel Monzon's Cell 211. The film is based on a novel of the same name by Jo Nesbo, whose Fart Powder was a big hit with the kiddos. I hope he's pleased with the adaptation... 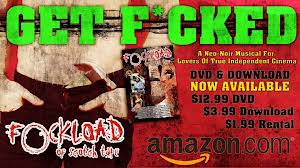 ... 'casue goodness knows, weird shit can take place in the transition from page to screen. I know a little bit about that... annnnnndddd - it's now available to stream or purchase on DVD Julian Grant's F*ckload of Scotch Tape, and included as bonus content on the disc is Paul von Stoetzel's short film Viscosity - which is teh awesomes.

Tomorrow, I'm headed to Corydon, IN. (just outside Louisville, KY) for N@B with Frank Bill, Kirby Gann, David James Keaton, Matthew McBride, Carrie Gaffney, Lou Perry and CJ Edwards. It's gonna be a blast and a half. Lots of books available, bring your cash money. Also looking forward to seeing Robb and Livius from Booked - who will be making a record of the event for posterity.
Posted by jedidiah ayres at 3:31 PM

Season four is really great until, typical of the show, punches are fucking *pulled* yet again. Season five is even better than four but I'm counting on some more puss-outs come crunch time yet again. It's a show that alternates between being purely enjoyable and a total hatewatch (see: all of season three aside from the finatle). Frustrating show because, you know, how the fuck do you fuck up a show about a motorcycle club so consistently but, still, more pleasure than pain of late, thankfully.

dammit. I don't wanna hear that. Still got the final third of the season to go and I was really hoping hard that it'd hold up.